The Xiamen World Cup events last weekend saw plenty of thrills and spills with Susanti Rahayu becoming the first women to record a 6.995secs run in Speed whilst both Adam Ondra and Chaehyun Seo clinched the 2019 Lead titles. 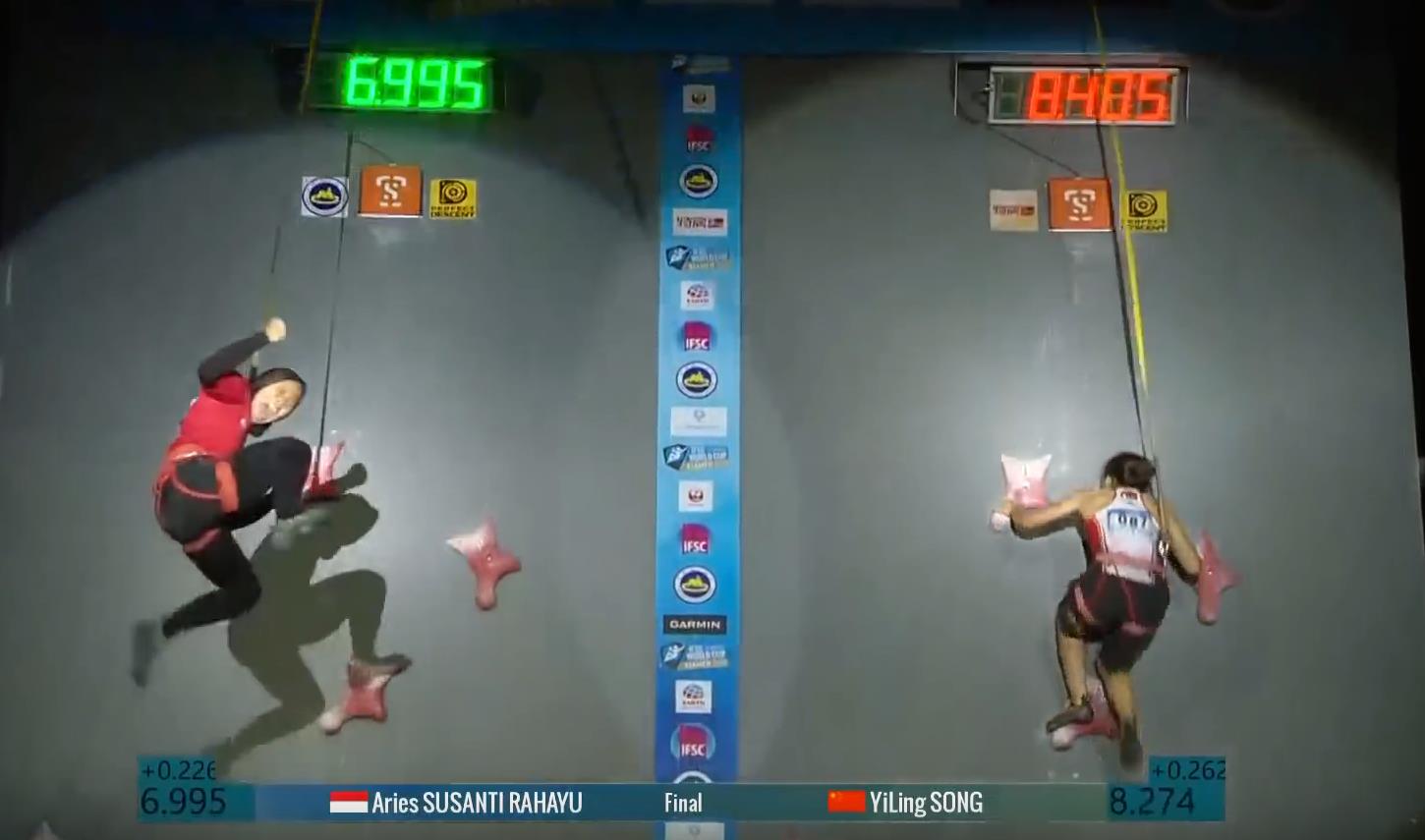 Aries Susanti Ruhaya finished the season with a win at Xiamen in a new World Record time of 6.995 secs – the first time any women had gone sub 7seconds

The final Speed World Cup of the year was first up on Friday and the event couldn’t have provided a bigger end to the season with a new world record for the women when Aries Susanti Rahayu became the first ever women to go under the magic 7 second barrier with a time of 6.995 seconds. Whilst the former world record holder YiLong Song was beaten into second place by Rahayu at Xiamen, Song’s efforts throughout the season meant that she finished with 460pts, more than sufficient to take the season gold. Anouck Jaunbert finished the season with 355pts and a silver medal; Rahayu got the season bronze with 333pts. The men’s Speed title was still up for grabs at Xiamen and whilst Oixin Zhong took the win at Xiamen with a time just 1/100th of a second slower than the current world record it was Bassa Mawen that took the season Speed gold for the second year running with 329pts. Vladislav Deulin and Alfian Muhammad finished the season with silver and bronze medals having scored 312Pts and 286pts respectively.

In addition to settling the 2019 title race there was another vital matter in the men’s speed event; namely the appearance and performance of Adam Ondra in only his second Speed World Cup of the year. Whilst Ondra’s performance was never going to challenge even the lead and boulderers speed times, crucially, he needed to successfully record a second - and half decent - speed time for the year if he was to stand any chance of qualifying for Toulouse and keeping his Olympic dream alive. In the event Ondra finished Xiamen in 50th on 8.435sec and as a result is now in 2nd place overall in the World Cup for 2019 which means that he will be invited to compete at Toulouse in the Olympic Qualification Event in November - much to the relief of his followers as well as to himself!

With the Speed World Cup finished it was time for the penultimate Lead World Cup of the season. Whilst Chaehyun Seo went into Xiamen with momentum very much on her side Janja Garnbret would surely be fighting hard for a win also. On the men’s side, Ondra had looked in excellent lead form during the last couple of event. Originally, Ondra hadn’t been down to compete in the lead event but a last minute change of heart saw him lining up with the others.

The results in the qualification and the semi-final rounds were dominated with tops and ‘same move’ fall points. Much has been said, and it’s generally recognised that the setters have a very tough time, but in this occasion it seemed that they hadn’t got the standard of the routes right and as a consequence there was a considerable number of competitors all on the same positions going into the finals. This meant that count-back wouldn’t necessarily provide a definitive result so in the case of tied positions competitors climbing times would be used to separate climbers and provide the much needed results. 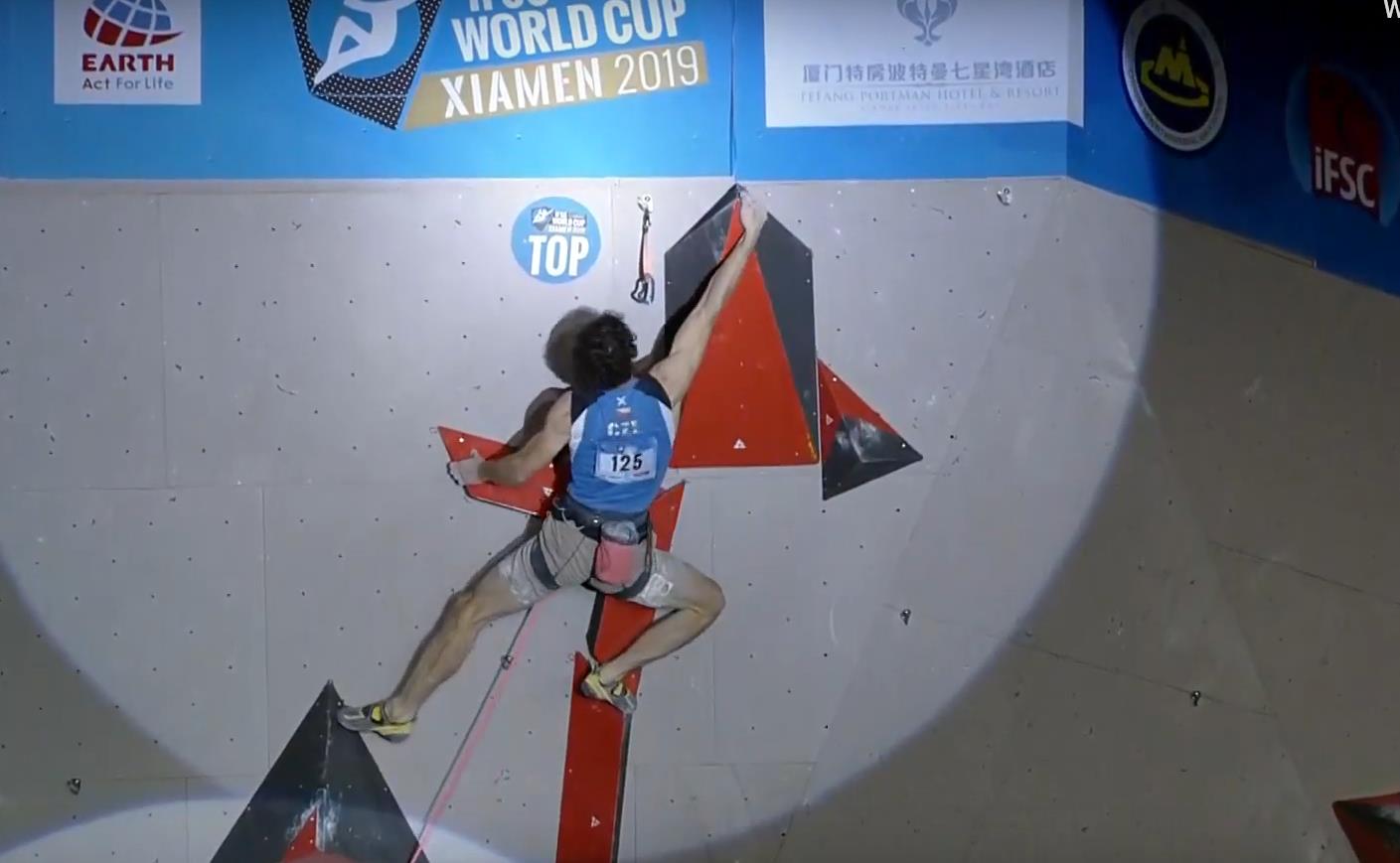 Going into the men’s final Kai Harada held a slender lead over the rest of the field.  Climbing first Tomoa Naraski absolutely blasted up the men’s route to the first top. Taisei Homma and then Adam Ondra also topped. Climbing last Harada chose to dyno the final move to the top and like Garnbret later in the women’s event it cost him the win; surprisingly he finished off the podium in 4th with Ondra, Homma and Naraski all finished in 1st, 2nd and 3rd respectively. Ondra, having won all three of the WC Lead events he’s entered in 2019, is now on 300pts - 111pts ahead of second place Kai Harada. That’s an unassailable lead going into the final event so Ondra takes the Lead title for 2019 as a result. 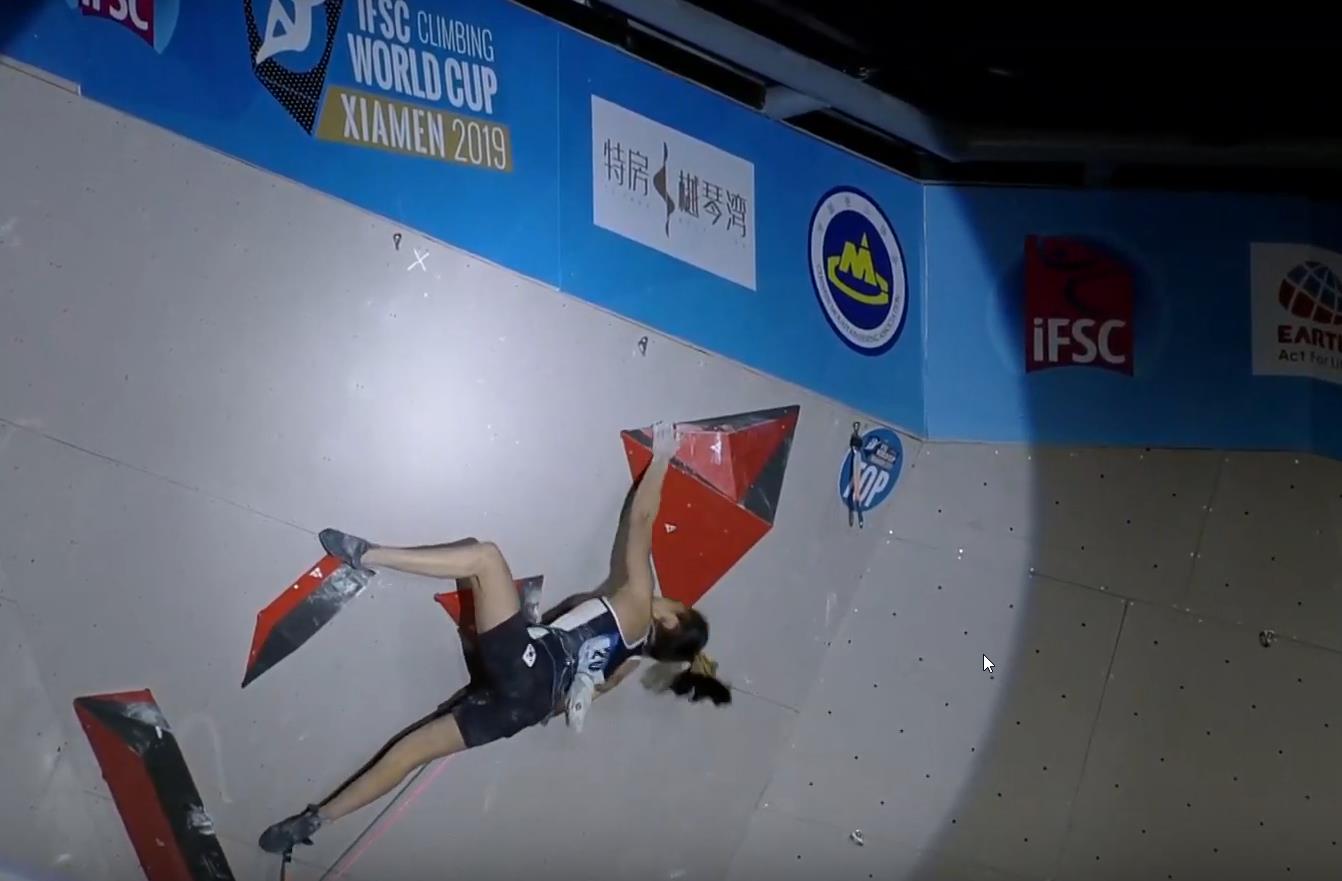 Chaehyun Seo winning at Xiamen and the 2019 Lead Gold in her debut season!

Climbing after the men, the women’s event opened with a solid performance from Luka Rakovec. Rakovec climbed quickly up the route but then rather surprisingly fell dynoing for the very last hold. Although it seemed as though we might see multiple tops that wasn’t the case as the next competitors all fell off lower down on the route. Finally, it was Jain Kim that provided the first top when climbing in her silky smooth style she clipped the final quick draw with just seconds to spare! Akiyo Noguchi and then Chaehyun Seo replicated Kim’s performance and also topped. In contrast to Rakovec, Seo, Noguchi and Kim all did the final move statically; the question was, would Garnbret also try and dyno the final move as her team mate Rakovec had done or would she adopt a more conservative approach? No doubt conscious of the possible importance of time because of the tied positions in the earlier rounds Garnbret climbed super quickly up the entire route and then took aim and promptly dyno’d for the final hold – and dropped it as Rakovec had also done! That Garnbret dropped a dyno was a rare example that a conservative approach was the correct one. As a result, Garnbret came 4th gifting the win, her fourth of the season, to Seo. Noguchi and Kim took the 2nd and 3rd place respectively. Seo now sits very firmly at the top of the seasons rankings with 182pts more than her closest rival, Garnbret; remarkable, and against all the odds, Seo has now won the 2019 overall Lead time with one event remaining – a remarkable achievement in her debut season!

Watch the finals for the Speed and Lead at Xiamen below…