Ted Kingsnorth repeats Just Do it at Smith Rock 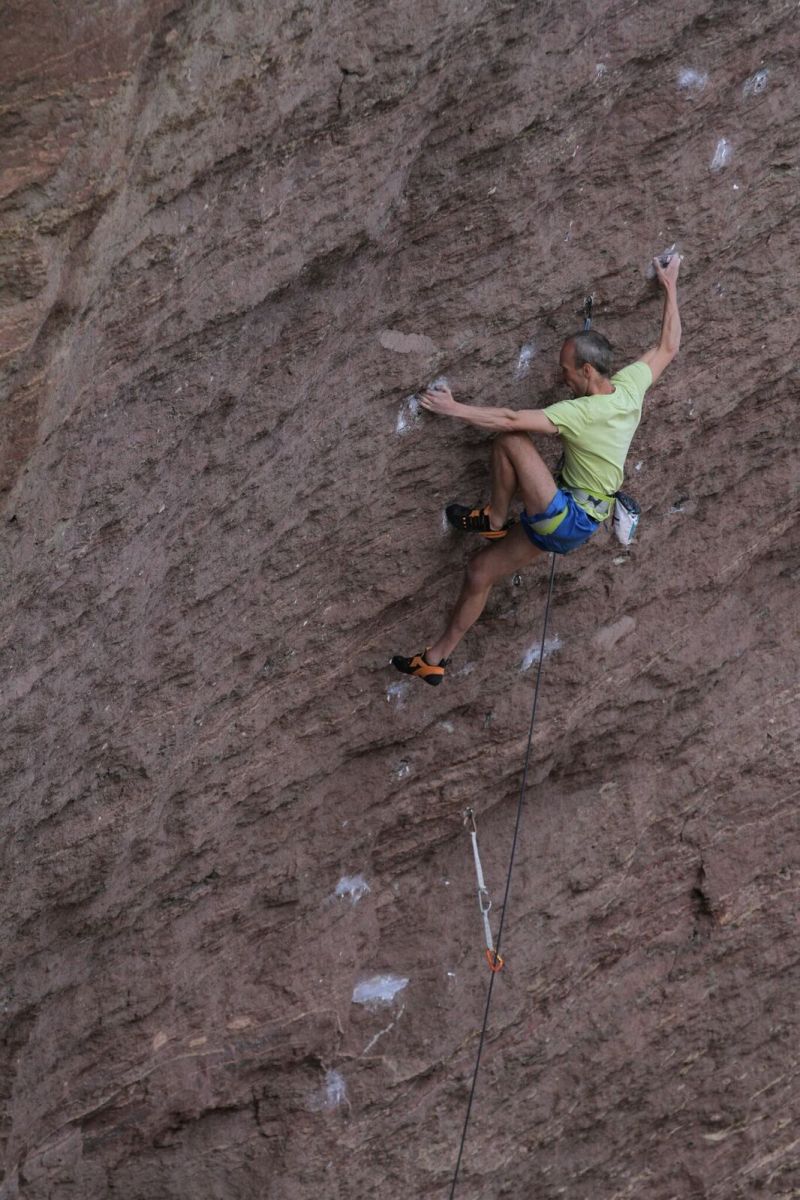 Ted Kingsnorth captured a couple of weeks ago on the upper crux of Just Do It. Photo Mike Doyle

Alan Watts blasted Smith Rock into the spotlight back in the 80’s with routes like Chain Reaction (5.12c/F7b+), Rude Boys (5.13b/c F8a/8a+) and East Face of Monkey Face (5.13d/F8b). Leading French climber JB ‘Jibe’ Tribout took over the driving seat however recording first To Bolt or Not to Be (5.14a/F8b+) in 1996 and then Just Do It (5.14c/F8c+). Jibe’s routes, the first of their respective grades in the US, helped to cement Smith Rock on the world stage. Climbers have been drawn to the striking orange-colour walls of welded tuff and the smooth black columnar basalt ever since.

Manchester-based Ted Kingsnorth has been a regular visitor there since 2014; alternating trips to Smith with stints at the hard-core sport climbing venues here in the UK. Ted’s UK tick-list includes such test-pieces as Kaabah (F8c+) at Raven Tor so Ted is very definitely no slouch when it comes to pulling on small holds.

Writing on his IG page Ted dropped the news that his three-year ordeal with Just Do It was over. “I've been here for 6 weeks now and have been running into increasing temps as summer fast approaches. The available windows were getting more limited so the only chances were late in the evening. After a relaxed session belaying and hanging out in the Gully in the afternoon with @andrewrocksmith and @nate_gerhardt, @strausswisee and me hiked over to the Monkey. It was warm and still on the warm up bolt to bolt go but by 8.20pm a light breeze had picked up and temps had fallen a bit. I set off wondering whether it was worth it trying it in the warm conditions wearing shorts but felt good progressing up the route and the rock felt grippy with the breeze. I managed to stick the upper crux and the tricky exit moves, having fallen here a few times in May. Big relief clipping the chains!”

CLIMBER have been in touch with Ted for the low-down…

Congrats Ted on redpointing Just Do It – something of a life goal there!?

Yes definitely. It is a route I had read about in the climbing magazines since I started climbing but I never imagined I would be in a position to attempt it never mind climb it. I remember reading about Jibe Tribout's historic first ascent in 1992 and that it was the USA's first 5.14c and I always wondered what this legendary route would be like.

Can you remember how you got started on Just Do It?

I climbed To Bolt or Not to Be (5.14a) in the Dihedrals sector at Smith in 2014, which was an ambition of mine and which is also a Jibe Tribout route. To Bolt was also a first of its grade in the USA and was first climbed in 1986 by Jibe. After doing To Bolt, I thought long and hard about whether it would be worth investing a major chunk of time and effort into Just Do It as it seemed like the logical next step, although I had heard that it was significantly more powerful than To Bolt and of a different character - less technical and more straight pulling.

It’s hard enough having a project in your back yard – but 6000 miles away?!

Yes, it was certainly not without its logistical problems! Maybe it was a little ambitious but back when I started I didn't really appreciate exactly how hard it was going to prove. Once I got sucked in though, I was too far down the road to quit! Thinking back to my attempts on the route back in 2015 and 2016, I was a little below the level needed to tick it although at the time I thought I was quite close. Even though I was quite consistently getting to the upper crux, I needed to raise the bar training wise in order to succeed. Having only 2 weeks at a time away from work was not enough to have a realistic chance of ticking a route at this level away from home, for me at least. It was only on this trip with no fixed return date that I was able to ride out the inevitable spells of poor conditions and take adequate rest days for the muscles and skin to recover in between attempts.

Can you describe how Just Do It stacks up in terms of the climbing style and length?

It’s a 35 metre stamina route but with distinct crux sections interspersed with good rests. The first half is a vertical 8b on the yellow rock in the lower half of the Monkey Face equipped with its own chains. Just before the belay of the first 8b pitch, there is a very good rest where you are bridged out on smears and holding onto a good flat hold. You can get a lot back there. There then follows 3 bolts of 7c which reaches the purple rock in the top half of the face. This bit starts to get steeper and leads to a good flat hold where you can get a good shake with your left heel up. Then the meat of the route kicks in. You have a powerful 8b to complete which comprises 2 boulder problems separated by the 'porthole' rest which is a good hole to shake out for about 45 seconds but with very poor feet so it’s pumpy staying there. The first boulder problem is V8 on small crimps and the second boulder problem after the porthole is also V8 but more sustained involving a powerful cross through from a 2 finger pocket to a small gaston crimp leading to another 2 finger pocket. Linking the sections of the route on their own becomes OK after enough practice but linking it all together is tough!

Last winter you bust your heel and spent a lot of time on the fingerboard and only started back on routes in the spring. Was that what made the difference on this trip do you think?

Yes, I think I managed to get a bit stronger over the winter by cutting out climbing for 2 - 3 months and just going on the fingerboard and campus board. I got into max hangs with added weight and also one-arm hangs. It’s hard to do this when you can boulder but when you are on crutches, it’s your only option!

Could you compare Just Do It with Kaabah at Raven Tor in terms of difficulty.

Just Do It was harder than Kabaah for me. It was a fair bit longer (albeit with better rests), more pumpy and the upper cruxes were more powerful and sustained. The upper part of Just Do It was steeper as well plus there are no kneebars on Just Do it so more fitness was needed, for me at least. I guess when Steve did Kabaah in 2004 he didn't use the Mecca kneebar.

And finally, is it time to chill now for a bit and then get back home for more projects?

Definitely, I'm just in the process of booking my flight back to Manchester and hope to get stuck into my projects at Kilnsey, Dalliance and Progress when I get home. Hopefully they are dry! Plus I'd like to keep chipping away at Evolution at the Tor in the autumn when it gets cold.

Ted is sponsored by Scarpa.