Continuing his trad mission, Steve McClure made the first ever on-sight ascent of Nightmayer (E8 6c), at the back-end of last week to record one of the hardest on-sights ever achieved in the UK. 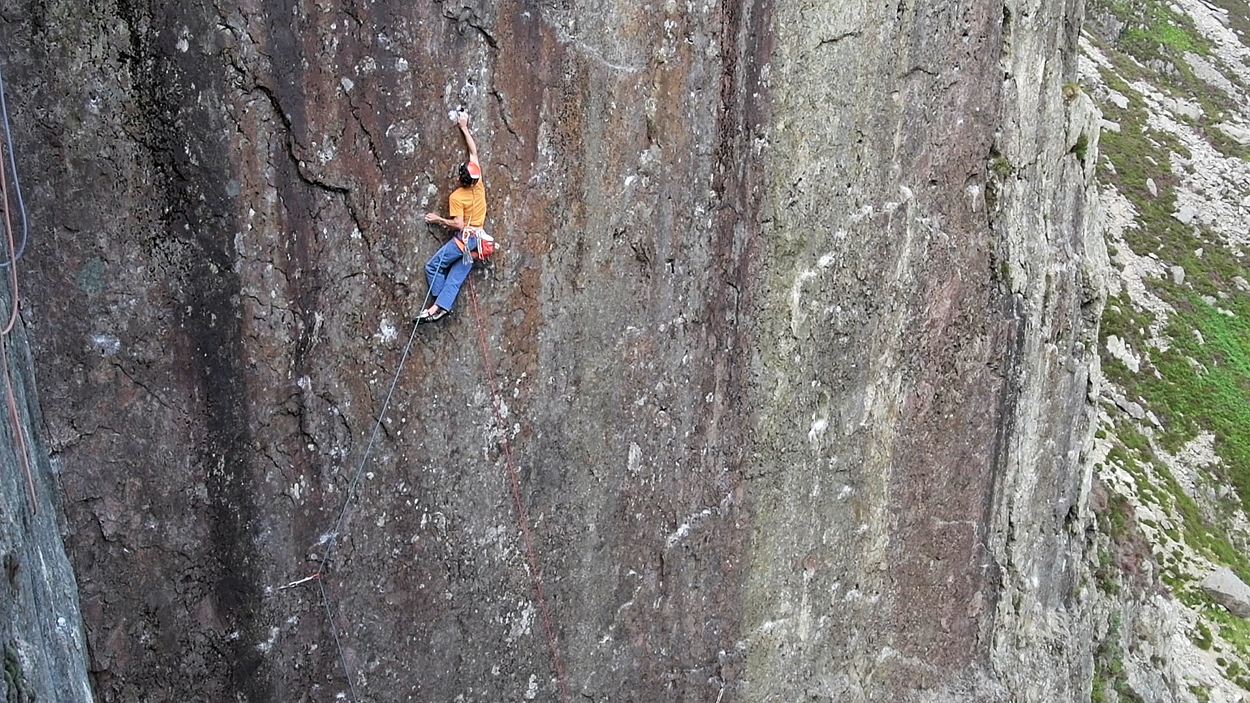 Steve approaching the skyhook placement on the upper section of theheadwall during his on-sight. Photo Keith Sharples

Just weeks after completing the first ascent of GreatNess Wall (E10 7a) at Nesscliffe, Steve McClure turned his attention towards the next target on his list, Steve Mayer’s 1992 classic, Nightmayer, on the Cromlech.  Tim Emmett did the second ascent soon after Mayer’s original ascent and then it’s stood neglected until recently when Alex Mason, Angus Killi and Emma Twyford have all head-pointed it.

Although Steve is better known as a sport climber he has also headpointed a number of hard trad routes including; Rhapsody (E11/F8c+), Choronzon (E10/F8b+), Muy Caliente (E10/F8a+) and The Big Issue (E9/F8a+). In addition, he’s also on-sighted to a very high level notching up Point Blank (E8) in Pembroke, Dawes Rides the Shovelhead (E8) at Raven Crag in The Lakes and Dalriada (E7) on the Cobbler in Scotland.

Here’s a Q&A with Steve in which he explains how he got logged-onto Nightmayer, how he prepared for his on-sight attempt and how hard he had to try…

It’s clear that the Pass is a special place for you; why is that?

I think Llanberis Pass is a special place for most British climbers. It holds so much history, as well as quality, not to mention it’s simply beautiful. As a kid I’d spent so much time pouring over books and magazines with images of the Cromlech and the historic routes, I was desperate to get there. At 16 I hitched alone from Teeside and was dropped off by the boulders. I clambered out, dropped my bag on the grass in the boiling sunshine by the trickling river and stared up at the Cromlech towering over me. It was everything I’d dreamed it would be.

When did you first think about trying Nightmayer and when/where did the idea to try it on-sight come from?

The route has been around a long time, but not on my radar. I guess the Cromlech really is about the traditional on-sight style, and so I’d simply not have been anywhere near up to that challenge. Steve and Tim spent a while on it; clearly it was tough. I knew it was there, it was just too hard for me. Other routes took my attention, but then more recently with the ascents from people like Emma and Alex it came back into view. I just love it up there, and it became almost logical that I’d have a crack. The grade seemed about right to go for it.

A bit like GreatNess Wall at Nesscliffe, Nightmayer is ‘run-out and bold but basically safe’. Was that what appealed to you?

First of all, I think the ‘basically safe’ bit can be dropped! But in answer, yes, that’s what appealed, in retrospect, both could be safe, but the fall potential is massive, and when dropping that far ‘safe’ cannot be assumed; they are not sport routes dropping into space! But that’s what drew me in. I absolutely love the extra kick of keeping it together when it feels a bit spicey, but I’m absolutely not into hurting myself and strongly against an early death! Hard trad routes with decent gear are actually not so common. Both of these two are fairly perfect for me. 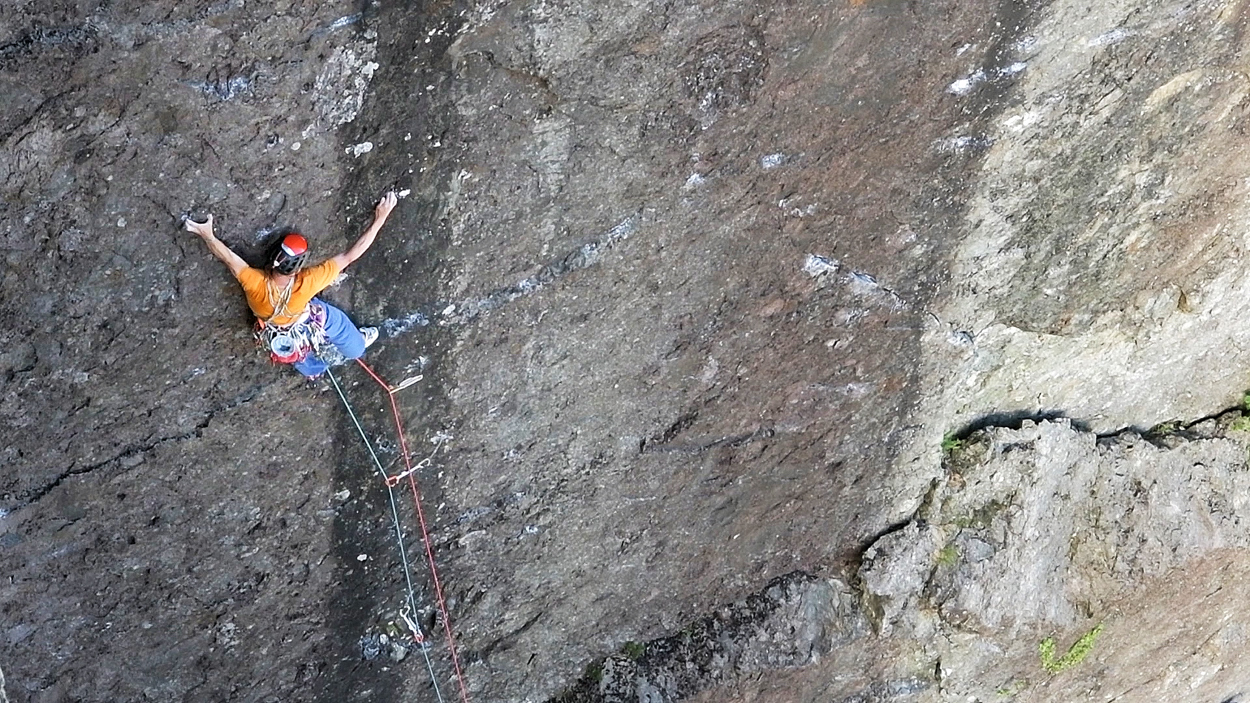 Steve starting the initial bold section on Nightmayer (shared with House of God) where Lord of the Flies goes on right. Photo Keith Sharples

Which routes had you already done at the Cromlech and would you say the climbing suits your style and plays to your strengths?

The beauty of the Cromlech is there is something for everyone; Spiral Stairs, Cemetery Gates, The Corner, Left Wall, Resurrection, Right Wall, Lord, and Nightmayer. I’ve done these, the real classics, and some of the others too. The climbing absolutely suits me; really technical, lots of footholds, not steep, spaced but often OK gear and good rock.

For the record can you tell you what you knew about Nightmayer before setting off?

Other than the guide book description, I knew nothing at all about the route other than a skyhook was useful. This bit of info seemed to have seeped into the grapevine somehow, though I didn’t know where it went. On a wall like this most people would take one anyway, I would have. I took the one Ed and James were using as it looked better than mine. To be honest, the guide book should mention the skyhook along with a small wire. It turned out to be quite important! But for future on-sight efforts, that’s all you need to know – ‘small wires and a skyhook protect the upper wall’. You won’t miss the critical bits, they are obvious. I should also mention for the record that I had done Lord previously which shares the first 10 foot, though this is the easiest part of the route, which also meets at the girdle ledge where gear is placed. However, I think this was a fair on-sight. I’d not been on the route, inspected holds/gear on abseil, watched anyone on it, or talked to anyone about the moves or gear placements.

Nightmayer has had three ascents in the last couple of years plus Ed Booth and James Taylor have both been trying to head-point it this summer to close-out their account. That must have been super hard not to be tempted to ask about beta?

Actually no, I didn’t want any information. What I did want was to know they were trying it, this meant it was dry and chalked. On a huge route like this, and on a rock type like this, any movement information is unlikely to really help; way too much to remember. Unless there is some trick move or hidden hold I’m usually better off working stuff out myself. As for gear beta, I already knew the girdle ledge had gear, and knew a wire and skyhook protected the upper wall. But I suppose critically and most important for myself, I knew just about everyone had fallen off – and not died! So basically I figured I’d be able to work it out. I figured I’d be able to assess progress and gear and not get into a situation. In retrospect, some gear beta WOULD make a difference!! But I’m glad I didn’t take it, though if I’d fallen off maybe I’d have wished I had!

Many climbers – including yourself presumably – have seen Nick Bullock’s video clip of Nico Fravresse taking a massive whipper off Nightmayer. How did you feel about that?

I saw the clip. If anything it is ‘anti-helpful’!! Nico doesn’t move at all, so you can’t get any ‘beta’ if you wanted any, but then falls off only half way up the headwall, takes a monumental lob and almost hits the deck. He hardly makes it look safe, and you have to wonder why he didn’t protect it, and also, Nico is a bloody good climber who has climbed 9a, and was on a flash go after abseil inspection…….

A number of climbers (Emma Twyford during her recent podcast with Grimmer) have said that Nightmayer would be impossibly hard to on-sight. Nico’s had inspected the line – off an abseil apparently – and don’t get the flash. How did you pull this one off?

I actually listened to Emma’s Podcast just last night. It was nice to hear her thoughts, I know how good Emma is – bloody good! It brought it back just how hard I had to really try. After the event you quickly forget, but I really had to give it everything, and only just got it. I’ve seen people say ‘its 8a so for Steve it should be ‘piss’, well, it doesn’t work like that! 8a is really hard. 7b is hard! An Olympic level 100m sprinter who can manage 9 seconds doesn’t just stroll along in 9.5 seconds! I’d say this was one of the hardest pieces of climbing I’ve ever done. It’s up there with Rainman, Overshadow and Rhapsody though in a different style. 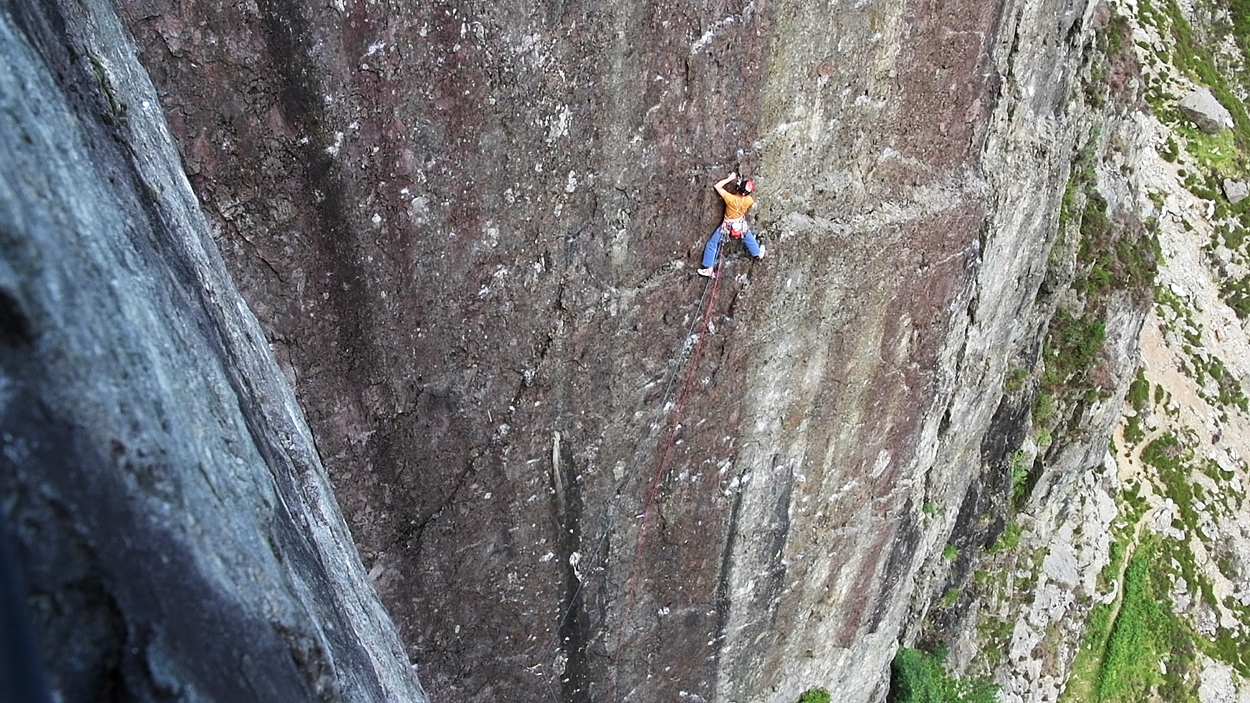 Steve having finished the lower run-out section shared with House of God is on the girdle ledge arranging gear before committing the crux of Nightmayer on the headwall.  Photo Keith Sharples

On some of the routes you’ve worked then head-pointed you’ve said that you often go into sport-mode and just ‘go-for-it’ once you commit to the lead. That seems fair enough on routes like GreatNess Wall but that can’t be how you approached Nighmayer surely?

‘Sport mode’ seems to be a term invented to really mean going for it with 100% commitment, with movement unhindered by fear, just like when we are sport climbing. Accessing this mode, on the really hard trad routes, is crucial, as often they are so hard that success demands this level of focus – you can’t be pondering if the gear is OK, or if you’ll still hit the mat, or if maybe you should down climb! Hitting this mode is awesome, though not easy to find, often trad routes are a constant battle of gear hunting; every move and you are fiddling in another wire. But occasionally a route is of a style where its ‘gear then go’. You assess your situation; the protection quality, distance from ground, distance to next protection; if it stacks up, then change gear into sport mode and go for it! The key is not to slip out of gear! On Nightmayer I absolutely went into sport mode, it demanded that, it was that hard for me.

In the past you’ve ‘scored’ your gear (nuts, cam etc.) on a points system; 0 (is rubbish) to 5 (equivalent to a bolt). Is that still your approach and did you employ that tactic on Nightmayer?

Absolutely. The key is to remember and believe. That bomber cam that is never coming out (a ‘5’) can start to look sketchy from above and seems to drop a point with every metre you climb. It’s all very analytical really. Break the route down, know where your lines are. This the absolute beauty of trad climbing, that constant assessment. And just like when the climbing is right on the limit, this assessment is also tested too; how good is the gear, how far can I go above it, what if the next gear turns out to be rubbish. As it turned out in this case I think I just about stepped over the lines I’d have normally been happy with!

Nightmayer has been given E8+, or a French grade of 8a; would you say that about right and was it easier or harder than you thought?

The lower wall is a necky E6, a really good one, but Nightmayer is all about the headwall above the girdle ledge. For some reason I didn’t think it would be so hard, I’ve seen it graded 7c+, and maybe was thinking it would be easier as it it’s a trad route. But no. It’s damn hard. It’s the hardest trad route I’ve onsighted by a chunk.

You’ve headpointed up to E11 in the past but would you say your on-sight ascent of Nightmayer was harder and hence more significant for you? Are you keen to try anything harder – assuming you get inspired with a route that is in this ‘bold but safe’ genre?

In a nutshell, personally this feels very significant. Its ‘only’ E8, so people will barely notice. It’s not E10 or E11. But personally this was really up there. I’m very psyched for more – but it can’t be really harder, as I reckon I just about hit my limit physically and mentally! But there are a few routes out there that I’ve got my eye on…