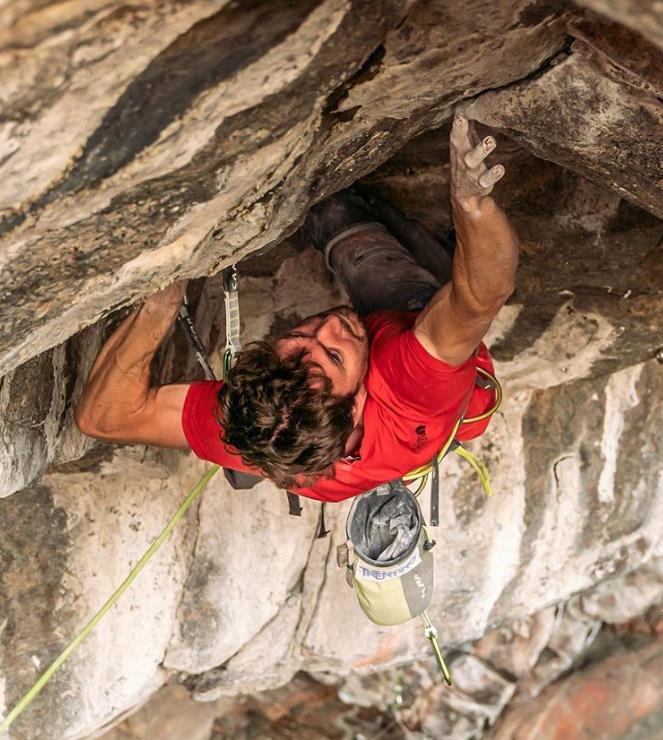 Originally climbed by Adam Ondra back in 2012, Change was the world’s first route to be graded F9b+. The 55m route is effectively two pitches separated by a pretty decent shake-out where and easier route, Ronga (F7c), comes in from the left. The first crucial F9a+ pitch climbs into and out from a savage overhanging bottomless groove/roof just above the floor of the cave. The upper pitch, itself F9a, blasts upwards and outwards up the massively overhanging wall above taking a broadly parallel line to the right of Ondra’s other monster route, Iron Curtain (F9b).

Ghisolfi travelled to Hanshallaren in early August and spend get straight down to business in the cave with a very fast ascent of one of the shorter and more powerful testpieces; Muy Verde (F8c).

“I can finally show you what my project is... I know you want me on Silence, but it is not the route I wanted to try (for the moment), I made my decision and I won't CHANGE my mind!” Stefano wrote on his Instagram page. He was there for Change and Change alone it seems. Working pretty much exclusively on the first pitch – he did spent some time “upstairs” on the second pitch to check that out – Stefano finally honed his beta which was quite different from that used by Ondra. Finally, on August 27th, nearly three week after arriving, Stefano redpointed the first pitch giving it a personal grade of F9a+/b.

Rightly satisfied with his efforts Stefano posted; “I know it is just the half of the dream, but it is an important goal anyway, the first anchor of Change (Change P1 9a+/b) is done ✅ ???
Now I just have to climb it again, and add the second and very long part (still a 9a after the first anchor) to achieve the Full Change, but it seems now more possible than ever!”

By early September Stefano was heavily involved with pitch 2. He posted; “Working on crux 2, the hardest part of the second pitch. Even if is a steep traverse arete, it is very technical and requires a precise use of heels and toe hooks. It is a perfect mix of power, endurance and technique, the moves are cool and from there it starts a long way until the very top of the route.”
By September 6th he successfully redpointed pitch 2; “ Finally climbed the whole crux 2 (starting from the chain of P1 and not from the ground), but after that is still hard and possible to fall, coming from the ground would be much tiring (although there are some good rests), and I can imagine it would be a huge fight until the very top, with many risky moves.”
However, a day later Stefano left Hanshallaren to return home to Italy for the forthcoming national lead competition. A week later he’d hoovered that up – for the 7th time! By September 26th he was back in Flatanger!
Just a day later he posted; “Change 9b+ ✅ TThe battle is over, unexpectedly soon, a mental and physical fight that took me more than one month and two trips to Flatanger, it ended today with a bloodbath lasted more than one hour of climbing to complete the 185 moves and 55m of Change, the very first 9b+ in the world, bolted and climbed only by @adam.ondra in 2012. I feel relieved, tired and happy, and I enjoyed everything it came with this amazing (and frustrating) journey.”

Following his ascent Stefano said that Change was a climb that truly pushed himself to his limits and will live long in the memory. "I've never felt so tired and happy at the same time, all the efforts and training paid off today, my feelings are a mix between relief, happiness and disbelief.”

“It has been a huge fight from the first crux until the very top, the wall was hot and slipery, not the perfect condition to climb such route, I was nervous while climbing, but I somehow managed to composed myself and send it using all my energies, I couldn't go closer to my mental and physical limit"

Hanning Wang, a climber and a regular visitor to Hanshallaren, was in the cave watching Stefano redpointing Change.  Posting on Instagram later he described Stefano’s remarkable second ascent – Stefano reposted Henning’s description on his own page later. It’s a wonderful description of what it take to succeed climbing at such levels.

“Today was a warm and windless day in the cave. The sudden change in temperature made the rock humid, and holds that were dry just a few days ago were suddenly seeping.
In the sun the rock was a bit better, but it was boiling hot, so when Stefano then went for his attempt I didn't really think he had much of a chance.
Not that he hadn't been close on some of his previous attempts, but that had been in much better conditions and it had still looked desperate.
I'm not sure what had Changed today, but suddenly he just cruised through the boulder in the second part (where he had been falling off the previous attempts) and got to the next good rest.
Everyone had stopped climbing and gathered to cheer him on and watch at this point.
The top is supposed to be much easier than the lower part, but it's not that easy, and at this point he had been climbing in the full sun for a while already.
I thought to myself (but in the words of Ben Cossey), he must be cooking by this stage.
And it was still a long way to go.
In the film from the first ascent, the top is not really shown very well. They just fast forward through it, creating the impression that once you get through the boulder after the first anchor it's just a cruise to the top.
Watching Stefano climb it though told a different story. It seemed very possible to fall in several places.
Close to the top he climbed into some sidepulls and suddenly seemed unsure of himself, having climbed into something that didn't look possible to reverse, the crowd was buzing. Was this it? Was he sweating like the rest of us and struggling to hold some shitty crimp? Would he take the hearthbreaker fall so close to the chains? But then he composed himself and made a full on dyno sideways. The cave went completely silent.
I can't imagine a more gripped crowd in any worldcup, and when he not long after clipped the chains the cheer was genuine and loud.
Inspired and super psyched we then all went back to our own projects. And... failed miserably because conditions were still terrible ??”

Stefano’s second ascent of Change is also his second route of that grade; having redpointed Perfecto Mundo in late 2018.