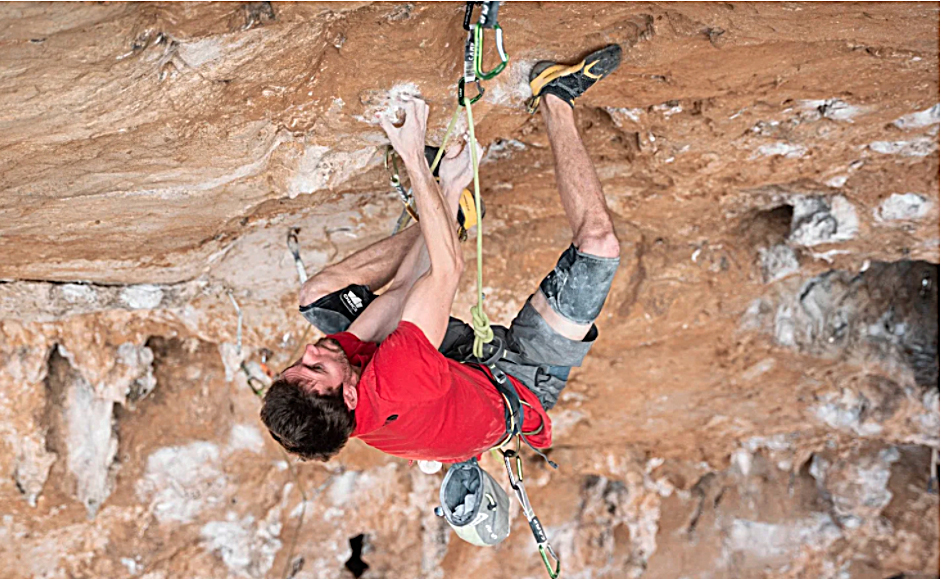 Located just over an hour south of Rome, Grotta dell’Arenauta lies just 20m away from a popular beach. Taking full advantage of excellent climbing conditions, Ghisolfi added what he believes is the first route of its grade in central/southern Italy.

The long standing project was first bolted over 20 years ago by Guiliano Targuini. Ghisolfi first worked the project early in January but struggled with a knee-bar in the middle of the roof. Returning home, Ghisolfi trained specifically for the knee bar rest; returning for his second visit to the project success came quickly the second time around.

Writing about his ascent on Instagram, Ghisolfi said that the usual humid conditions were much better on the day he sent that route, so much so that despite feeling difficult on his working days the route felt much easier. Ghisolfi isn’t certain about the grade but believes it could be F9b.

He described the route the route in detail on 8a.nu saying:

“The first part, the less overhanging, is 7a to the first chain. From there starts the roof part, around 20m almost horizontal roof. The first section of the roof is not super hard, around 8b+, and then there is a bad kneebar and from there starts the real challenge. A hard section on pockets with very bad feet, some ten intense moves. The line does not cross any other route, it is one of the purest and most logical ones, straight in the middle of the roof.”

Adding L’Arenauta to his CV increases Ghisolfi’s route count to a total of 11 routes of F9b or harder, six of which have been first ascents. Ghisolfi had a storming year in 2021 adding Erebor (F9b) and The Lonely Mountain (F9b) as well as making the second ascent of Alex Megos’ Bibliography (F9b+). Previously, Ghisolfi has also climbed Perfecto Mundo and Change – both F9b+’s.

Watch Ghisolfi working the project during his first visit below...