Stefano Ghisolfi gets second ascent of The Queen Line

Stefano Ghisolfi has just made the second ascent of Italy’s hardest sport route, The Queen Line (F9b) at Arco. 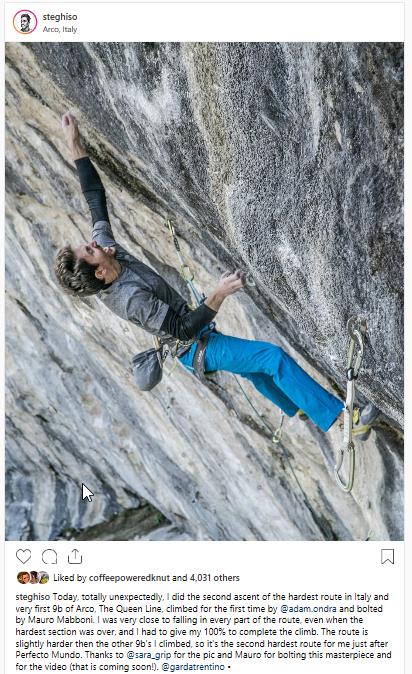 The Queen Line at Laghel, a crag near to Arco, was originally bolted by Mauro Mabboni. Originally Stefano Ghisolfi first worked the route in 2017 alongside Adam Ondra. However, Stefano finished up concentrated on the line just to the left which he made the first ascent; One Punch (F9a+). Meanwhile Adam did the first ascent.

Stefano tried the route again in 2018 but the weather conditions weren’t right for the super intense route like The Queen Line. However, fast-forward to February when the climbing conditions have been much better.

Posting on IG, Stefano had this to say about his second ascent: ‘Today, totally unexpectedly, I did the second ascent of the hardest route in Italy and very first 9b of Arco, The Queen Line, climbed for the first time by Adam Ondra and bolted by Mauro Mabboni. I was very close to falling in every part of the route, even when the hardest section was over, and I had to give my 100% to complete the climb. The route is slightly harder than the other 9b’s I climbed, so it’s the second hardest route for me just after Perfecto Mundo.’

The hardest part of The Queen Line is about 20 moves long and is about 10 to 15m in length with the most difficulty moves at the start of the route including a long move out right. The upper section, although much easier, is still droppable. The harder exit, nick-named “The King Line”, thought to be around F9b+, still awaits completion.