Rhossili is a small village at the end of the South Gower Road. Situated on the westerly tip of the Gower Peninsular, the golden sands have long been a tourist hotspot. Over the past few years Adrian Berry, Rob Lamey, a few keen locals and myself have been developing the sea level cliffs into one of the regions best sport climbing venues.

Over this time one of the coves most frequent visitors has been Ben West. The Bristol based climber is well known for his bouldering prowess, competing for team GB, but his route climbing CV is also pretty impressive with several F8b’s ticked off in quick fashion, it was clearly time for a sterner challenge. 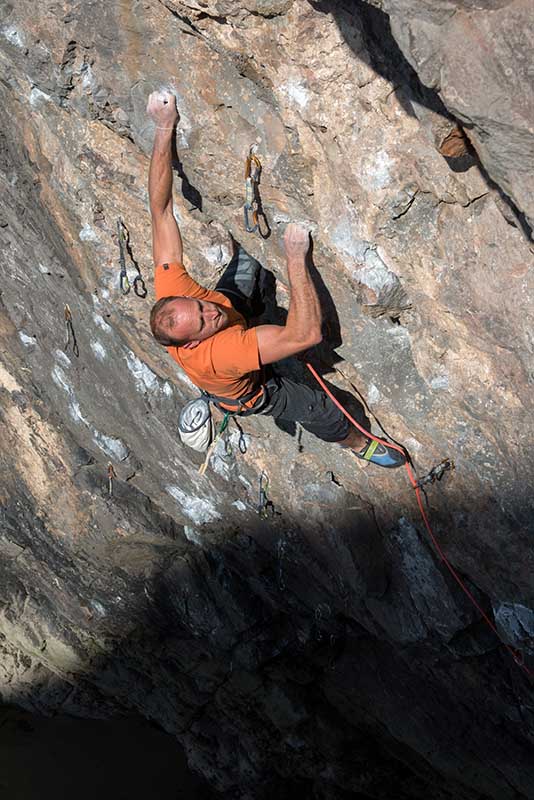 During his early visits Ben ticked most of the routes in the F7’s and was already taking on some off the crags harder testpieces. This included a repeat of Adrian’s Airshow (F8a+), 2nd go, and was followed up by repeating my own route Achilles Wrath (F8b) in a meagre 6 goes. It was at this point that we pointed Ben at a project I had bolted directly up the centre of the crag through some steep and unrelenting terrain.

Since bolting the line I had made some progress but it was clear that it was going to be a quite some time before I could make any substantial links. From the moment Ben first tied, on the project clearly had the clock ticking before it would become a reality.

Ben took around 12 sessions spread over last autumn and this summer to unlock the sequence that would eventually see him succeed. The route is around 28 meters long with sustained climbing throughout. Others who have tried the line have muttered there being several V8 boulder problems stacked up with no shakeout opportunity between, leaving Ben with the hard task of grading the route.

The outcome has become South Wales hardest line, F8c. Helvetia, named after the prominent shipwreck located on the beach and featured on almost every postcard of Rhossili.  It is first of its grade in the region and Ben’s first at this grade, to all who have seen him on the route it is clear that there is much left in the tank and I would expect to see Ben take on more at this grade and beyond.

Many thanks to Simon for the report and photograph. You can see more of Simon's work at simon rawlinson photography