Domen Skofic, Anak Verhoeven and Vita Lukan have been on the send train in Spain with repeats of Ali Hulk Sit Start plus Extension (F9b), Patxitxulo (F9a/+) and an on-sight of Geminis (F8b+) respectively. 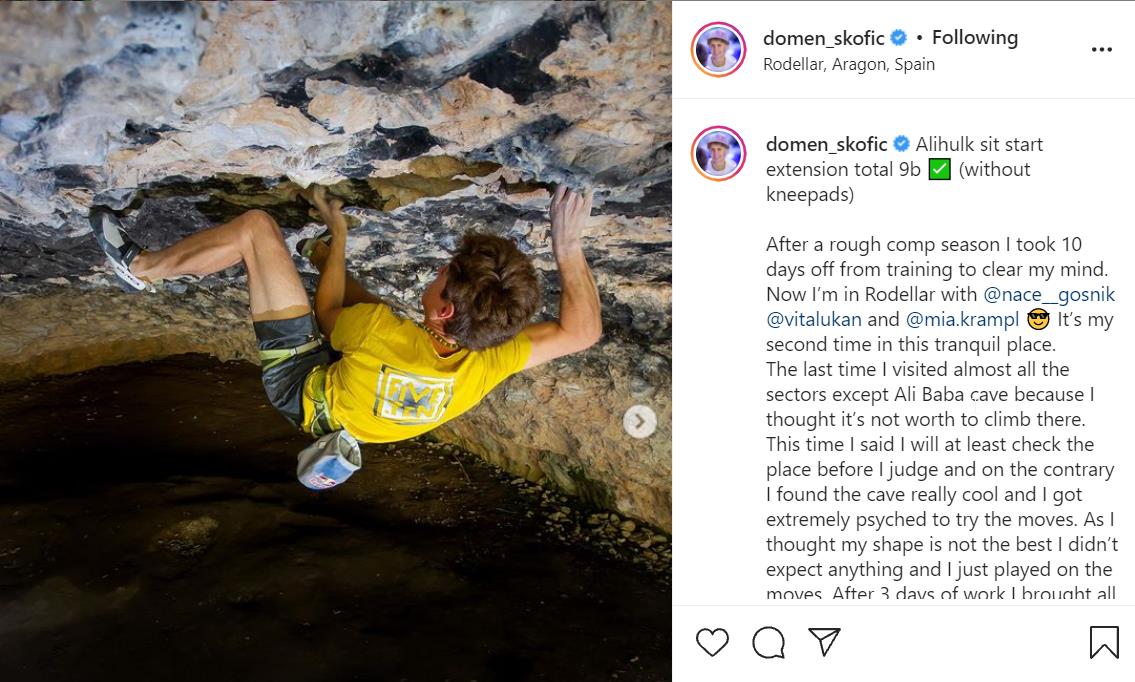 The Ali Baba Cave at Rodellar is something of a love-hate sector at Rodellar in that some climbers love it and others hate it; curiously, Skofic having previously demised the cave flipped his thinking around on his latest trip and finished up getting an ascent of the full line of Ali Hulk Sit Start plus Extension.

Skofic, having had something of a mediocre year by his standards in the world cup competitions, took some time off from training before heading out to Rodellar for his second trip there.

“The last time I visited almost all the sectors except Ali Baba cave because I thought it’s not worth to climb there. This time I said I will at least check the place before I judge and on the contrary, I found the cave really cool and I got extremely psyched to try the moves.”

Despite thinking that he wasn’t in the best climbing shape Skofic send three days working all the moves and then managed to redpoint the link-up on his first attempt.

Despite not using kneepads on the route itself – something which will clearly make the route more difficult – Skofic infers that the route might still not be worth the given F9b grade – in his words: “I didn’t expect it’s going to happen that fast and therefore I’m a little bit sceptical about the grade.
9b or not it felt great building this puzzle together and made me even more motivated for my future goals.”

As we reported at the time, both Laura Rogora and Dave Graham repeated the full link-up last year; both using kneepads and neither saw fit to question the F9b grade at the time of their ascents. 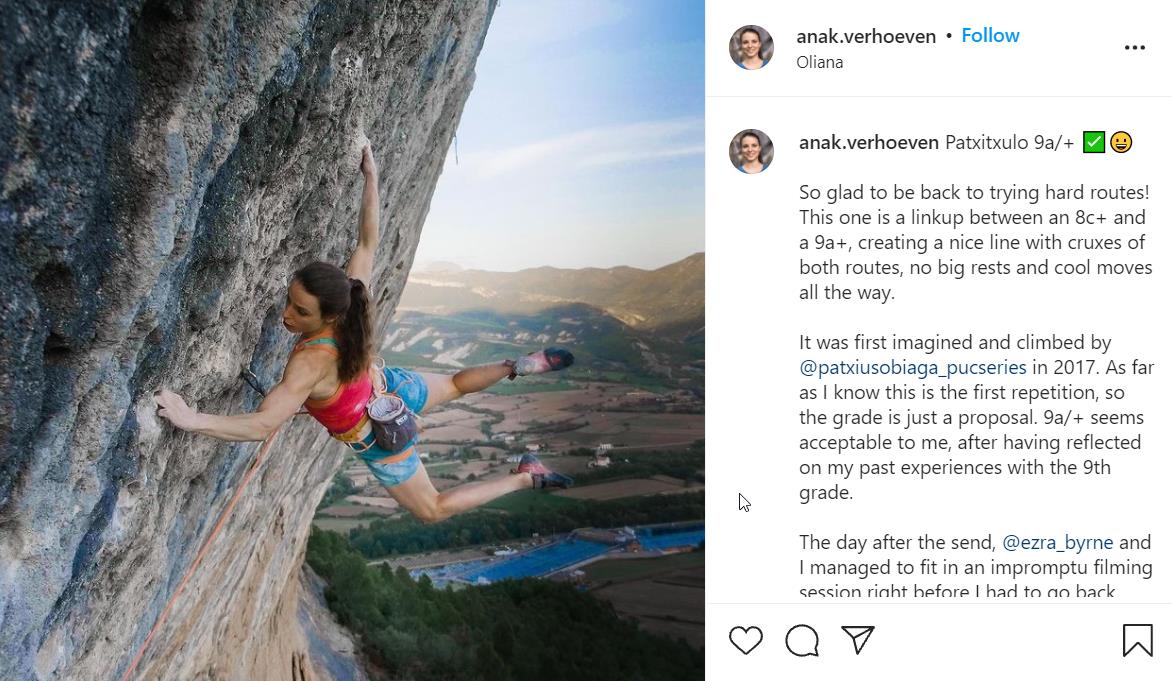 Meanwhile, over in Oliana, Anak Verhoeven has done what is believed to be the first repeat of Patxitxulo (F9a/+).

Originally climbed by Patxi Usobiaga in 2017, Patxitxulo is a link-up of the two hardest sections of an F8c+ and an F9a+ route and involves sustained climbing throughout its full length. Like Batman (F9a/+), Steve McClure’s route at Malham which has been in the news recently having had three ascents this year, Patxitxulo was only seen by Usobiaga as a means of preparing for his ultimate goal, Papichulo (F9b).

“As far as I know this is the first repetition, so the grade is just a proposal. 9a/+ seems acceptable to me, after having reflected on my past experiences with the 9th grade.” Verhoeven commented. Previously, in 2017, Verhoeven did the first ascent of Sweet Neuf (F9a+) at Pierrot Beach in the Vercors which she followed up with Joe Mama (F9a+) in 2019. 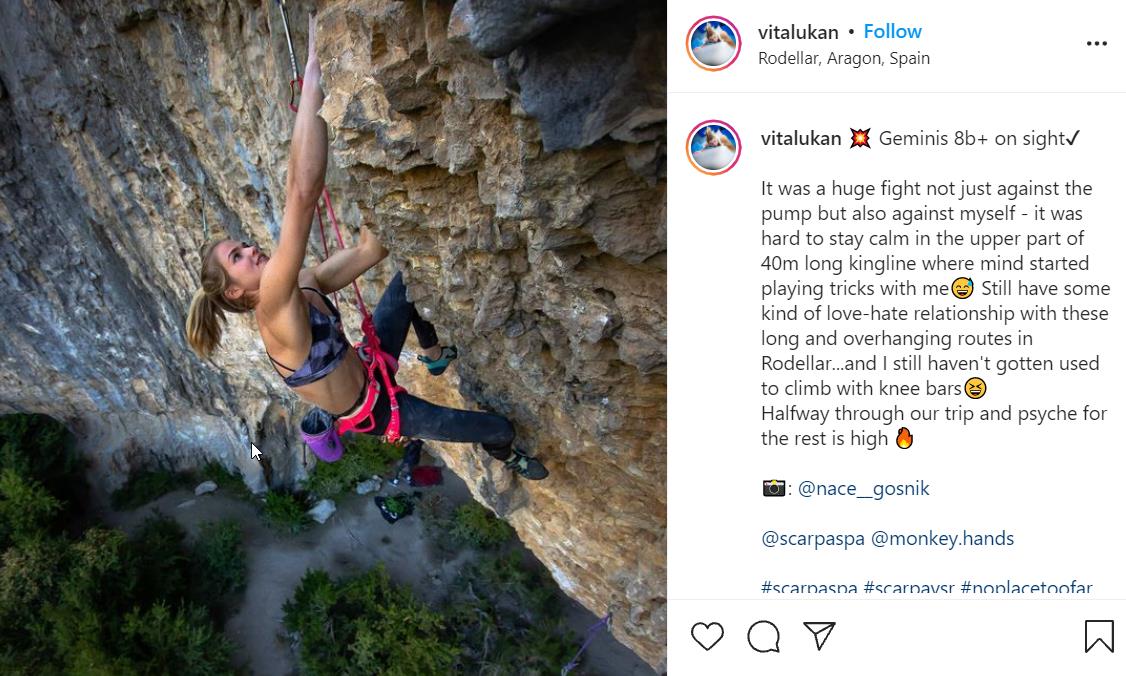 Finally, Vita Lukan – also climbing with Domen Skofic and Mia Krampl – has on-sighted the 40m monster Geminis (F8b+). Posting on Instagram Lukan described her battle with Geminis; “It was a huge fight not just against the pump but also against myself - it was hard to stay calm in the upper part of 40m long king line where mind started playing tricks with me? Still have some kind of love-hate relationship with these long and overhanging routes in Rodellar...and I still haven't gotten used to climbing with knee bars?” Luken hinted at might still come during their trip to Rodellar: “Halfway through our trip and psyche for the rest is high?”

Luken's Geminis on-sight catapults her to the very highest levels of on-sights achieved by female climbers. Prior to Luken, only a handful of others have on-sighted F8b+ since Josune Bereziartu first on-sighted the grade back in 2006. Of the current active top female climbers Anak Verhoeven, Laura Rogora and Martina Demmel have all also on-sighted F8b+ since 2019; surprisingly, Janja Garnbret has yet to join the cohort although you could easily argue that she's been focused on her competition game recently!