Mountaineering legends, Sir Chris Bonnington and Doug Scott are celebrating along with the rest of the team after successfully completing their challenge to climb the height of Everest on the ice-climbing wall at the King Kong Climbing Centre in Keswick. 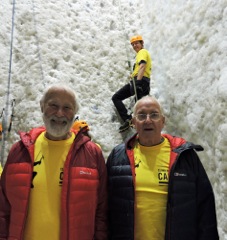 Sir Chris Bonnington and Doug Scott at the KKCC.

The purpose of the 24-hour climbing challenge was to raise vital funds to support the ongoing effort for the Climb For CAN following the devastating earthquakes earlier this year in Nepal. The 100-strong team, lead by Bonnington and Scott, started on noon Friday 12th June and successfully climbed the height of Everest in the 24-hour period.  In fact, the team notched up a very impressive 14,000m of ascent in total, easily beating the targeted 8,848m which is the height of Everest. 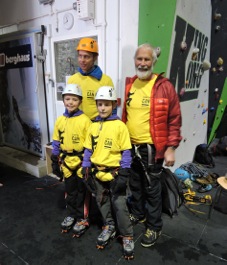 Sir Chris Bonnington and Leo Holding with some local school children at the KKCC.

Fellow Cumbrian climber Leo Houlding was also on hand to lend his support and made several ascents of the wall himself.  Outdoor company Berghaus kick-started the fundraising campaign with a donation of £5,000 and supplied all of the climbers with cold weather kit to wear during their time on the ice wall.  Berghaus brand president Richard Leedham and several staff from the firm also put in climbing shifts during the challenge.  The final ‘summit bid’ was made on the morning of Saturday 13 June by Bonington and Scott, completing the 24hr Everest Ice Wall Challenge ahead of schedule.

Toasting success at the KCC.

So far, the Climb For CAN campaign has raised over £36,000 for Community Action Nepal (CAN), a charity founded by Doug Scott 20 years ago.  Doug Scott said; "It’s humbling to have so many people spanning every decade, and many with no climbing experience at all, coming together to raise money for CAN.  The feedback has been amazing and everyone has had a fantastic time with many now looking to venture more into the outdoors and even planning trips to Nepal, which is what the country needs." Sir Chris Bonnington said; “It has been a fantastic effort by everyone involved.  We didn’t just achieve our climbing target, we beat it by some distance.  The response to the Climb For CAN campaign has been phenomenal, but we need to keep raising money.  All of Community Action Nepal’s projects have been affected by the earthquakes and every single penny that is being donated will be used on the ground in the regions where help is most needed.”

CAN provides nurses, health posts, teachers, schools and rescue shelters that serve 250,000 people in remote Nepalese villages.  In the regions hit worst by the earthquakes, such as Langtang, Gorkha and Helambu, these vital buildings have been badly damaged or completely destroyed, and homes have been reduced to rubble.  100% of donations made to Climb For CAN will go directly towards relief efforts and the rebuilding of communities.

Climb For CAN is being coordinated by Rupert Bonington, who runs sports nutrition business Mountain Fuel.  Rupert Bonington added; “This event was not just about raising money in the short term, it was about awareness and creating a sustainable fundraising model that can become a platform for ongoing challenges and events. Despite only coming up with the concept a few weeks ago we have been overwhelmed by the huge level of support we've received and must say a big thank you to everyone who pitched in to help, from the participants through to the sponsors.

“There is a lot more to come from Climb For CAN as we need to raise much more money.  We’ll see similar events at other walls and we’re encouraging other individuals and organisations to create their own Climb For CAN challenges.  Look out for more news soon.”

Along with support from many individuals, Climb For CAN has been backed by numerous local, national and international businesses.  Donations can still be made at www.justgiving.com/ClimbForCAN.  Visit www.climbforcan.org or follow @ClimbForCAN on Twitter for news of future challenges and events.