Enthralling the crowd with stories of commitment and daring does, Messrs Gresham and Cool brought the 2014 Sherpa Adventure Gear lecture series to a successful conclusion in Sheffield last week.

Working with eight BMC affiliated clubs around the country, Sherpa Adventure Gear laid on a masterclass and lecture at each location during the autumn/early winter. Sherpa-sponsored athletes Neil Gresham, Ed Hamer and Kenton Cool provided the celeb input with Neil and Ed running the masterclasses at the local walls and Neil and Kenton talking about their recent exploits on both rock and in the mountains as part of an evening double bill lecture. 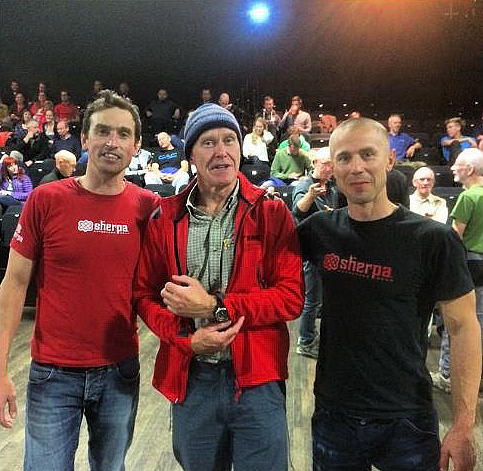 The venues varied from the “very swish Maths Department at Oxford and the classical Plant Science Department in Cambridge” to the “fantastic scout hut in Lichfield”. Venues aside however, the central theme from Messrs Gresham and Cool was all about commitment and trying your best – themes with which most climbers are both familiar and pretty good at getting behind.

Funds raised by the lecture series will be shared between the various participating clubs and the “Paldorie Education Fund”, a fund supported by Sherpa Adventure Gear which seeks to finance schooling for children whose Sherpa parents have been killed or seriously injured in the mountains as part of their jobs.

For more info on the Paldorie Education Trust click through here…