Last week Sebastian Halenke, a young German climber, rocked-up in the UK and immediately got stuck into the hard routes at Malham. By the end of his first day Sebastian had notched up a first-go redpoint of Transform F8c, an on-sight ascent of Raindogs F8a and had two working sessions up Rainshadow F9a. The next day he racked-up no less than four redpoints on Rainshadow including three trips to the top to re-work all the moves. Over the weekend Sebastian is checking out the scene in Northumberland – word is that he may be back at Malham on Monday for more Rainshadow action. 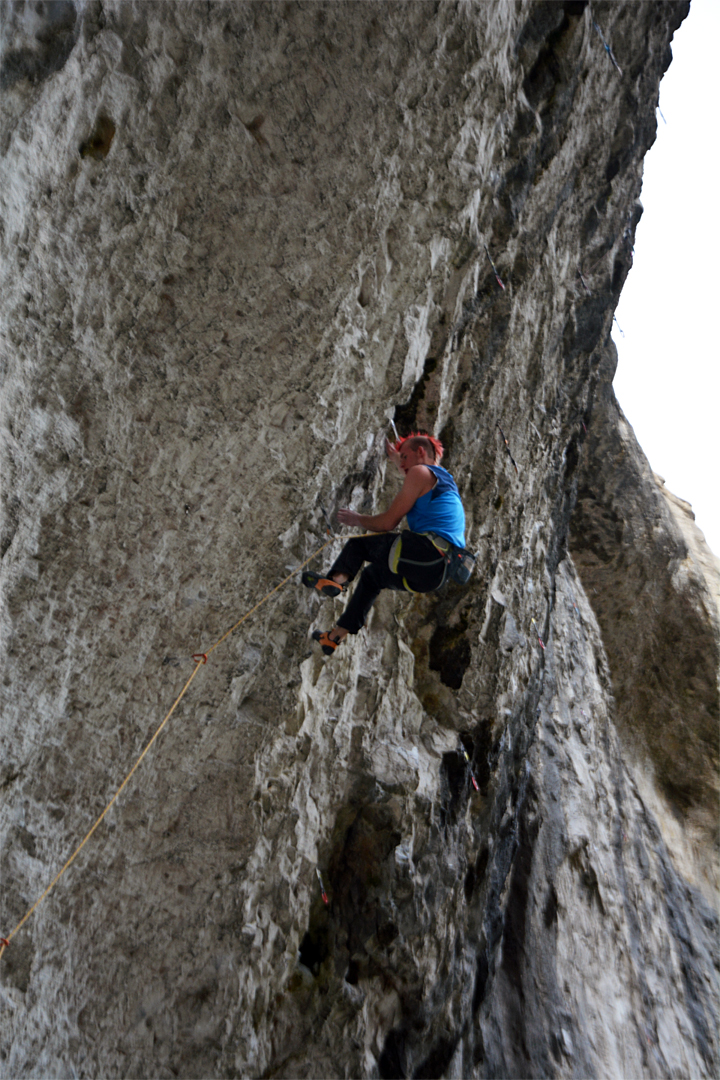 So let’s un-pack Sebastian’s visit. Firstly, for those not familiar with his background, Sebastian Helenke is one of Germany’s hot ‘youth’ climbers who as matured though the competition scene both at a national and international level. Having won the German (adult) championship in both 2011 and 2013, Sebastian has had top-ten places in senior World Cup and World Games comps – both in 2013. And yet whilst he’s clearly a very capable comp climber, Sebastian is on record as saying that he loves climbing outside for the “absolute freedom and love to nature”.

His on-sight of Raindogs put Sebastian into an elite group alongside Chris Sharma and Adam Ondra – a remarkably short list for what is one of the most popular F8a’s in the UK – especially for an endurance route that many reckon “has no hard moves”! Folklore has it, that two other climbers, Frenchman Didier Raboutou and Miles Gibson, were both a hair width off getting the on-sight as well in the past. Gibson apparently hit the chains but failed to hold them whilst Raboutou was unaware that the finish of Raindogs is traditionally a chain-grab (uniquely, the only such finish at Malham) and he fell off trying to clip the chain rather than grab it. Sebastian’s ascent of Transform F8c, Malcolm Smith’s 2000 extension to Rose Coronary, has had few repeats - in fact we only know of Steve McClure's second ascent which was quite a while ago now. Both ascents by Sebastian are therefore significant.

Rainshadow, Steve McClure’s 2003 test-piece, was Steve’s first super-hard route at Malham coming after he sent Northern Lights F9a at Kilnsey in 2000 and Mutation F9a at Raven Tor in 1998. To date, Rainshadow has only had repeats from Adam Ondra and Jordon Buys despite have drawn attention from a number of big hitters, Chris Sharma included.

Ian Dunn, a leading climbing coach and the current manager of the GB leading team, was at Malham during Sebastian’s two-day visit and has been good enough to give us the low-down on Sebastian’s thoughts. Ian explains what Sebestian had to say about Transform; “When I asked him what he thought he was impressed “a font 8a boulder problem in the sky” was his comment”. Ian adds that Sebastian give him his customary big grin smiling with delight at getting the third ascent of this powerful problem.

Ian Dunn told CLIMBER what impressed him most however was Sebastian’s level of fitness. Ian asked him about that as well – no doubt looking to unlock some insider knowledge that he could perhaps impart to our own Lead Team members; “When I asked him about his training he explained he does up to 11 sessions a week including a 30 move circuit around F8b+ that he does 10 times! And that’s just one session! So that’s where those big arms and shoulders come from.”

Sebastian was off to Northumberland for the weekend but was hoping to get back to Malham for a re-match with Rainshadow – hopefully next week. It’s clear Sebastian is impressed with Malham from what he said to Ian; “'There are just so many great looking hard routes to do I will certainly be back when I am in my route fitness stage of my training”.

Our thanks to Ian for sharing his conversations with Sebastian and for his photo of Sebastian on Rainshadow (above).