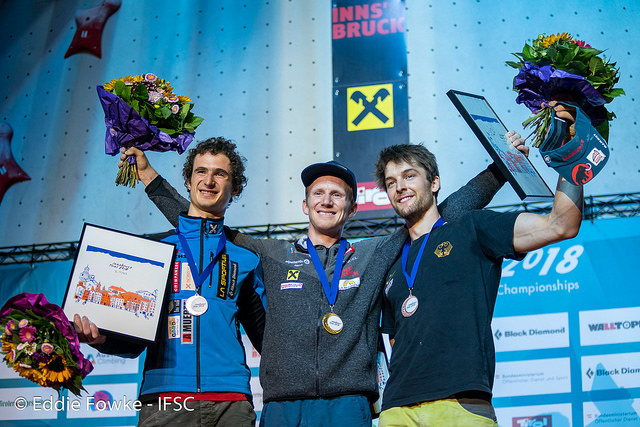 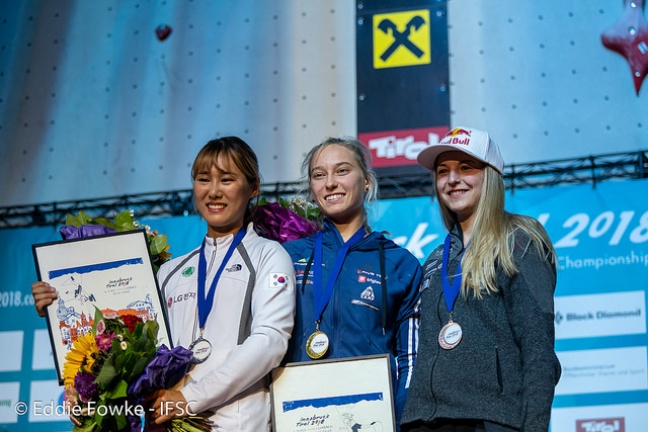 For the first time, the bi-annual World Championships followed the same format as will be used in the 2020 Tokyo Olympics. Individual competitions were initially held for the three separate events of lead, speed and boulder from which the six highest overall ranked male and female climbers secured a place in a ‘super final’ for the combined title event which was held yesterday.

The three-hour super final, a thrilling and well-run event. Competitors in the Combined Finals started with speed, and then faced the usual four boulder problems in four minutes before they finishing with a lead route.

For the men, Jan Hojer won the speed, Jacob Schubert the bouldering and Adam Ondra the lead streams. The overall title went to Schubert with Ondra getting the silver and Hojer getting the bronze. In the women’s stream Sol Sa won the speed whilst Janja Garbret won both the bouldering and the lead. The overall title went to Garnbret with Sol Sa taking the silver and Jessica Pilz the bronze.

Watch the highlights from the Combined Final below…

Following a dominant performance in the earlier rounds Adam Ondra appeared set for the gold and whilst climbing well what appeared to be an error caused him to fall off a small crimp. Jacob Schubert got to the same point as Ondra but his better result in the semi’s gave him the win. Alex Megos finished in third place.

Jessica Pilz and Janja Garnbret were clear favourites in the women’s lead final and each topped their respective routes in qualification, the semi’s and the finals! The gold was awarded to Jessica Pilz based on her faster time on the finals route! Jain Kim picked up the third place.

Flying the flag for Team GB, Molly Thompson-Smith finished in an extremely commendable joint 11th place – little short of an astonishing result for Molly given the major finger surgery at the start of the year. Will Bosi also placed highly finishing in joint 13th. The men’s qualification event was somewhat marred when some athletes were disqualified for standing on a sponsor’s banner!

Watch the Lead below…

As expected the specialised speed climbers dominated the event with Reza Alipourshena (IRN) and Aleksandra Rudzinska (POL) wining the speed golds in the astonishing times of 5.630 and 7.560 secs respectively. By comparison, the highest placed lead/boulder specialist Tomoa Narasaki (JPN) topped out with 6.697 secs in 21st and Miho Nonaka (JPN) with 9.061 secs in 28th. Will Bosi recorded 7.884 secs finishing in 50th and Jennifer Wood topped in 14.050 finishing in 70th.

The boulder championship was a remarkable event – not least because of the quality of the competitors eliminated in the early rounds; Alex Megos failing to make the semis and Adam Ondra the finals!

The finals themselves were a trilling affair. The men’s event was dominated by the young Japaneese climber, Kai Harada who pulled ahead of the field by topping all four blocs. Jongwon Chon and Gregor Vezonik both topped three blocs each with Chon taking the silver based on countback. Tops in the women’s event were more limited but Janja Garnbret and Akiyo Noguchi both topped two blocs with the gold going to Garnbret. Stasa Gejo picked up the third place.

British interest was headed by Nathan Phillips and Hannah Slanney. Nathan became the first Brit to feature in a bouldering final and took a well-deserved 6th place. Hannah Slanney finished her boulder campaign in 11th – another excellent result. Likewise Billy Ridal made the semis finishing in 20th.

Watch the bouldering finals below…