As the winter season draws closer and the cognoscenti sharp their tools and their skills, Ramon Marin has added an M12 to the treasure already at White Goods. 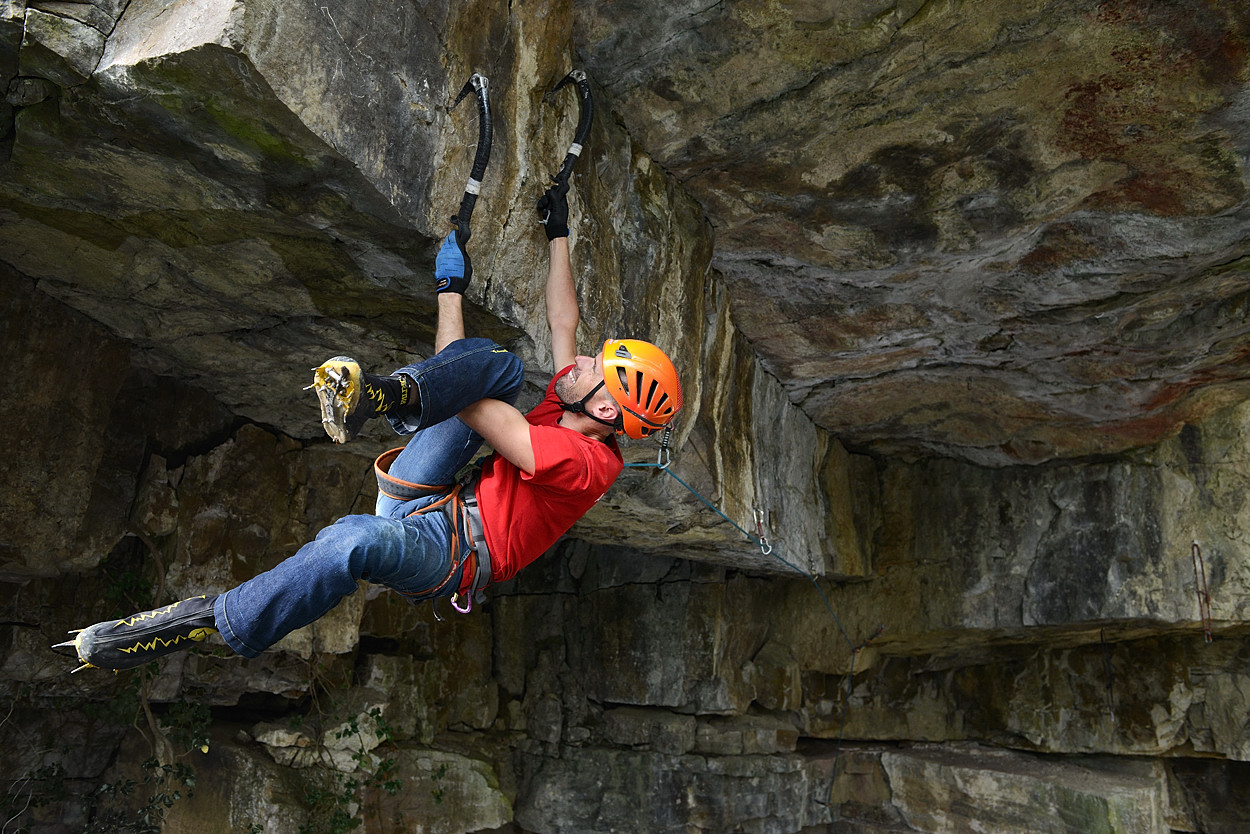 Ramon Marin cranking out a lap on Stump Man (M11). Ramon's new line takes the thin crack in the roof behind him. Photo Keith Sharples

White Goods isn’t the prettiest of crags – nor would its devotees argue otherwise – but the in the world of dry-tooling White Goods is pretty cutting edge. Tim Emmett’s Stump Man (M11) was formerly one of the hardest dry-tooling routes at White Goods if not in the country, now however, that prize has gone to Ramon Marin’s latest new route.

CLIMBER has been in touch with Ramon for the low down. Starting by giving us the background to his season Ramon told CLIMBER; “After having had my boots filled with great trad over the spring, summer and autumn, I got really psyched for Scottish winter. I got right back to White Goods with the mission to find a hard project to keep me motivated to train. White Goods is a good spot to get you fit for winter goals, it keeps delivering year on year.”

However, having climbed all the routes at White Goods several times Ramon needed a new challenge. He had just the line in mind through; “Last year I spotted a new line in the Power Pact Cave, apparently an abandoned project by Rob Gibson. I had a quick inspection a couple of weeks ago and it looked like a goer, so I started bolting it.”

The dry-tooling routes at White Goods weave in and out of many roofs. Ramon gives us the details of his latest line: “It starts up Stump Man and then, instead following the lip of the cave, it goes straight through a 5metre horizontal roof following a natural crack line. The crux is perhaps a big span two moves into the roof, where you have to full-wing into a precise shallow crack placement. Then you have to get a bit aggro to retrieve your tool and turn yourself around to make the next move. It’s all pretty pumpy. And then you have the lip and the headwall to negotiate, which are not too bad, but very taxing after the roof section.”

So how long does thing take to do then as a project? Not especially long – assuming you have Ramon’s skills and experience; “Technically, it took me two redpoints on the day, but during the process of bolting over two days the previous weekend, I tried all the moves extensively, so I knew the route inside out by the time I started redpointing.”

Grading is the usual tricky question and typically it’s a matter of comparing it with existing routes as Ramon explained: “I gave the route the tentative grade of M12 as it’s harder than anything else at the Goods. I’ve been doing laps on M11’s the previous days, and this is certainly a big step up, but further repeats need to confirm the grade.”

Finally Ramon added: “Dry tooling is just training for the big hills, but perhaps this route isn’t the best to train for Scottish winter or continental multi-pitch mixed routes. But it’s certainly a lot of fun, and I hope to keep the keen youths motivated with hard lines to go at.”