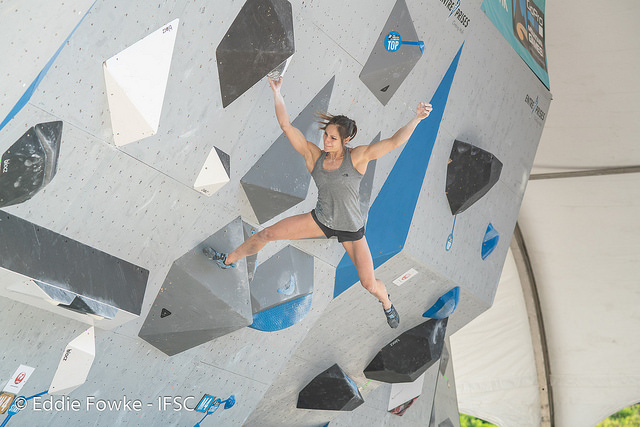 To the delight of the home crowd Alex Puccio and Sean Bailey pulled all the stops out at Vail to take deserved medals. Puccio held her composure on the final bloc to snatch victory and take her second victory in Vail following her success back in 2009. Puccio’s US Teammate Sean Bailey, also climbed very well beating US boulder champion Nathan Coleman and other renowned blocmiesters to take his first every world cup medal.

Shauna Coxsey and Leah Crane finished in seventh and 20th  respectively whilst in the men’s Aidan Roberts was the highest placed GB male in 19th.

With six of the 2018 features now completed the points table show that it’s all pretty much neck and neck between Jernej Kruder (400pts) and Tomoa Narasaki (396pts) for first and second with Rei Sugimoto trailing on 322 pts. Meranwhile over in the women’s event things are equally tight at the top with Miho Nonaka (500pts) and Akiyo Noguchi (495pts) leading Fanny Gilbert on 305 points. Shauna Coxsey trails in seventh place with 174 points.