If you had a sneaking feeling that Neil Gresham was on a roll up in The Dales you’d be right – he’s just done Premonition F8b+ at Kilnsey. 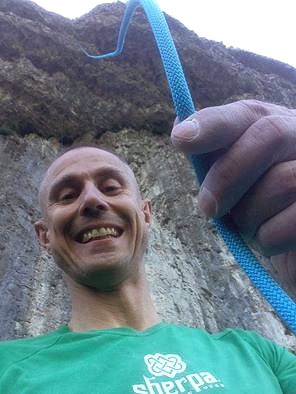 Following on from his earlier ascents of Straight Jacket F8a+ and Freakshow F8c which we’ve reported previously, Neil’s latest line is also at Kilnsey. Like Freakshow, Premonition tackles the monster roof above Déjà vu in the Directissima Area on the left of Kilnsey.

Neil confirmed his ascent and the line on his FB page on Sunday 6th; “Chuffed to have started up Ron Fawcett's Extreme Rock classic, Deja Vu today and continued directly through the roof via Pete Gomersall & Jill Lawrence's 1975 aid line (with a slight deviation).”

The deluges in August had halted Kilnsey action when the crag leaked like a sieve. Neil – along with plenty of others – had their autumn dreams shattered when they turned up at the crag to find it dripping wet through. However, and as is often the case, the better weather since as allowed the seepage to dry back in many places and whilst many of the Yorkshire climbers had been ‘playing away’ from the Dales, Neil was straight back into action as soon as it dried out to add his latest new line. All bets are off though that he’ll be working on something else fully capitalising on his latest form and good run. Obviously, the training by Stevie Haston is paying dividends! Watch this space…