Pope gets second ascent of Prisoners of the Sun

Jim Pope has made the second ascent of James Taylor’s Prisoners of the Sun on the Painted Wall, Rhoscolyn. 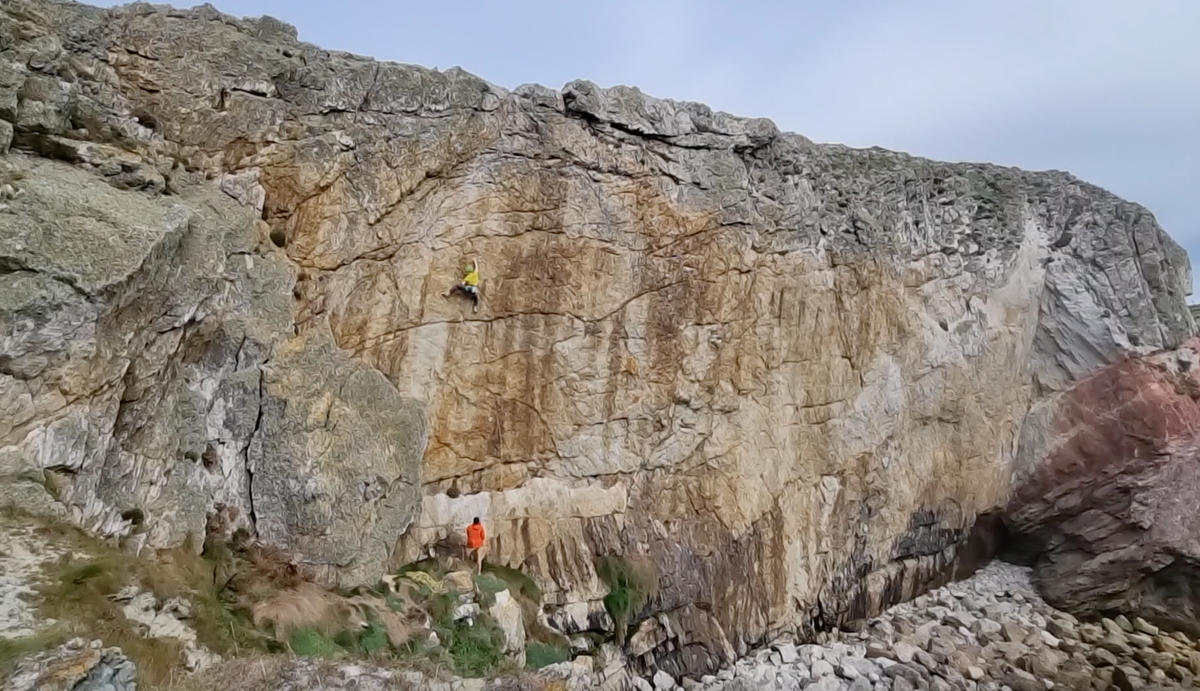 Jim is no stranger to the news. Having come to prominence climbing hard sport climbs as a youngster, Jim has gone on to do a number of hard cutting edge trad climbs on the grit such as Meshuga (E9) and Appointment with Death (E9), numerous hard boulder problems – many of which are first ascents – as well as competing on the international circuit.

Climber spoke to Jim about his ascent of Prisoners and you can read a short Q&A with Jim about that below.  Talking to Jim it’s obvious that he’s in great shape at the moment having prepared hard for the World Championships in Moscow. Frustratingly for Jim, that competition didn’t go as he would have liked and that when offered the opportunity to get out onto rock and test himself on something hard he jumped at the chance. “It’s been my ambition to try an E10 for a while and this was the perfect opportunity to go and get involved.”

What attracted you to Prisoners?

Ben (Heason) had been trying Surreal Appeal and was ready to go for a lead. I had just got back from the Moscow World championships and fancied some time on rock so took up the offer. I went with the intention of belaying Ben and just checking out the moves on Prisoners to see what it was like. Until recently, new hard routes have been few and far between and having predominantly climbed trad only the grit, I was keen to check out what that grade would feel like on the different style.

How long did Prisoners take you?

I had a short recce on top-rope while Ben got reacquainted with SA – so probably around 45 minutes including the warm-up - after the drive over from Sheffield. I then belayed Ben on his send and then I went straight after him.

Can you talk us through your ascent?

Whilst checking it out on the ab rope, I quickly found the sequence I liked and began refining the crux moves. The hardest part of the climb is the first section up to the first bit of kit. It involves several undercuts and crimps with pretty slopey feet. On the lead I climbed quickly through this section to the first cluster of gear, and then kept it together till the top!

We can still remember your infamous foot-slip when you climbed Appointment with Death (E9 6c) at Wimberry, Chew Valley. Any scary moments on Prisoners? 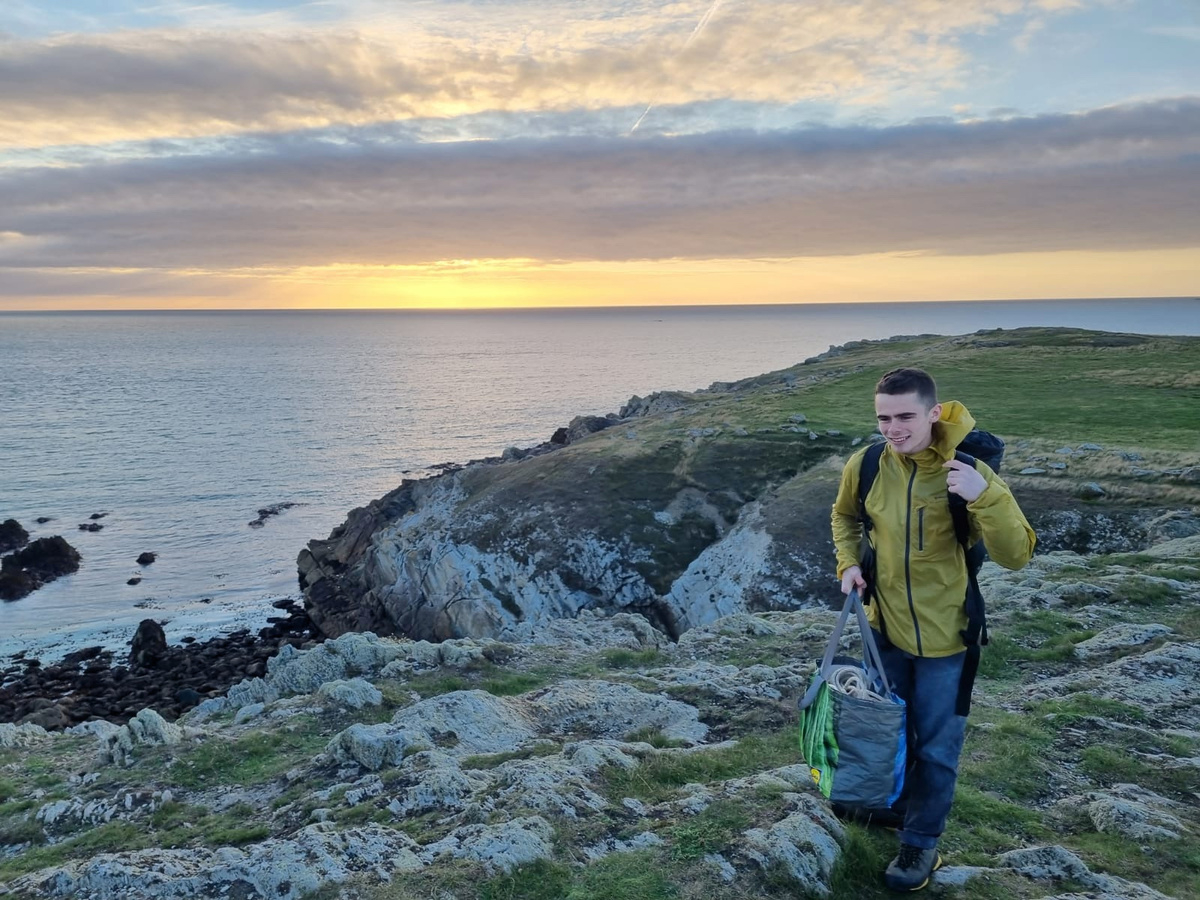 You’ve done a load of bouldering earlier this year and then switched to routes ahead of the World Championships. How did you find switching to trad?

I try to climb bits across all climbing disciplines year-round to not fall out of the loop, so it doesn’t feel much like a switch back. I think doing a variety of everything compliments each other quite well. I felt strong and fit after lots of training in prep for the World champs, I also felt really relaxed as it was just so nice to be back climbing on rock again after a stint of training.

What does trad climbing provide for you that other forms of climbing don't?

It’s quite nice to climb with some consequences everyone and then. When you’re at the wall or above a nice bolt, it’s easy to be a bit sloppy with your climbing as if you fall you can just have another go! I like the feeling when I feel like I’m climbing perfectly on a trad route, because you can’t afford a slip-up, and I don’t think you get that much in other disciplines.

It seems a lot of the hardest trad is being done by climbers who – like you – are strong boulders/sport climbers as well – how ‘essential’ do you think have that kind of background when you’re doing hard trad?

I don’t think it’s essential but it definitely helps to have some strength/fitness in reserve. Personally, I wouldn’t want to be trying dangerous routes right at my limit. If you’re bouldering Font 8B+ or sport climbing F9a, current trad routes generally have nowhere near anything that difficult (although Neil’s new route sounds pretty stern!), so if you can keep calm, it's a good position to be in (although sometimes if a move is really insecure, having excess strength doesn’t always help).

OK finally then, the elephant in the room; let’s talk about the grade. Having reflected on your ascent of Prisoners what are your thoughts?

This is a tricky one for me to comment on because I don’t have a huge amount of trad experience, and especially across a variety of styles. The bulk of my trad experience is on the grit, and some on-sighting in Pembroke. Personally I thought Prisoners climbed quite like a grit route, in that it’s a bit of a necky solo up to some good gear, and then small boulder problems between breaks. I felt as a sport grade it was around F7c+ ish with a Font 7B+ crux boulder.

We had what felt like quite good conditions on the day which would have helped massively. Danger wise, I can only really compare it to Meshuga and AWD, the climbing on Prisoners felt a lot more secure than both of those routes, and I think a fall would be big, but you’d ‘bounce’ off the short rock slab at the start onto a grassy ledge (and then probably off the ledge again!), rather than hit rocks. From a brief look at some of the other routes on the crag, they look to be run out between pegs. Maybe in relation to some of those, the route could be getting on for E10, but are they all E7? It's always hard to put a grade on something, and especially trad where the grade is even more subjective given you have to take into account how dangerous it felt for you. Personally, when comparing it to other routes I’ve done, I felt like I’d had an E8 6c experience.

Grading of routes is difficult and ultimately climbers can only grades routes relative to their experience both on the route in question and in comparison with other routes they have done. The first ascensionist has an even harder task to suggest a grade. James Taylor originally graded Prisoners E10 / F8b having done other routes such as Rare Lichen and Gribin Wall Climb both Welsh testpiece E9’s. James believed that Prisoners was technically considerably harder than those routes hence his grading.

Jim felt that conditions were excellent for his ascent and probably much more conducive than in June when James did the first ascent. He also felt the holds were positive and that unlike his ascent of Meshuga and Appointment with Death which he needed to rehearse repeatedly on a top rope to refine the sequence to eliminate any errors he was sufficiently confident in the moves on Prisoners that he could go for the lead after just one short top-rope session. Jim also commented to Climber that he’s comparing the suggested sport grading to that in the Peak which is notoriously difficult.

Climber understands that other climbers have been on Prisoners who feel that F8a/+ better describes the difficulties. Ultimately, a consensus on the grade will come after more ascents.