After a Covid decimated year the  La Sportiva British Bouldering Championships were back on Devonshire Green, Sheffield over the weekend; Emily Phillips and Max Milne took the titles in the closely contested competition. 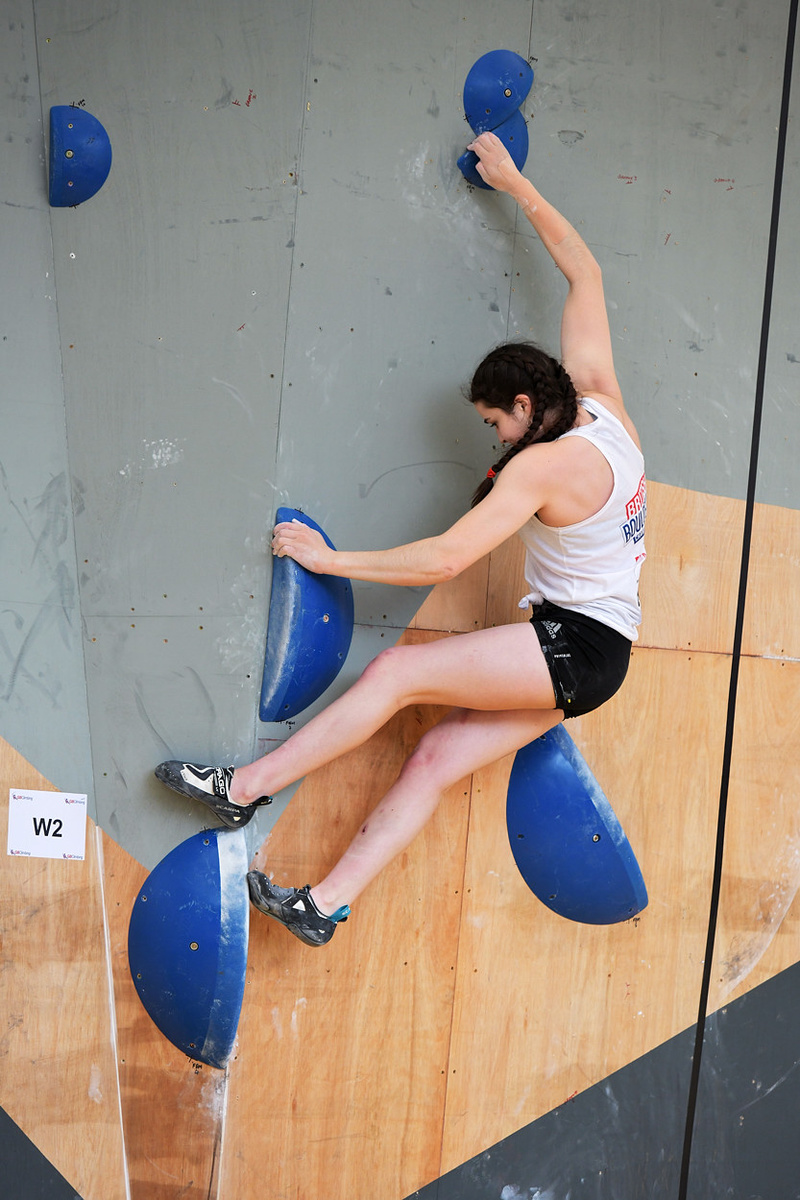 Psyche was high for the first national competition since 2019; 112 competitors signed up, 52 women and 60 men, in total. Saturday was qualification day where the fields in both men’s and women’s were slashed back to 20 competitors in each. Sunday saw both the semi-finals and the finals.

Reigning champions Nathan Phillips and Holly Toothill were firmly in contention after the qualification round although neither finished in the top spots; that honour going to Tara Hayes and Maximillian Milne – a.k.a. Max the Future - respectively. Max was the only male competitor to top all five qualification blocs; impressively taking just six attempts to do so. The top six women all topped the five blocs; Tara Hayes, making a welcome return after a nasty ankle injury, was the only woman to flash all five.

W1, described by the setters as “easier but stylistically difficult” defeated all the finalists; a number of them taking hard and uncontrolled falls off the final slopey foothold whilst attempting to control the final rounded hold. It’s fair to say that it wasn’t the start they were looking for! 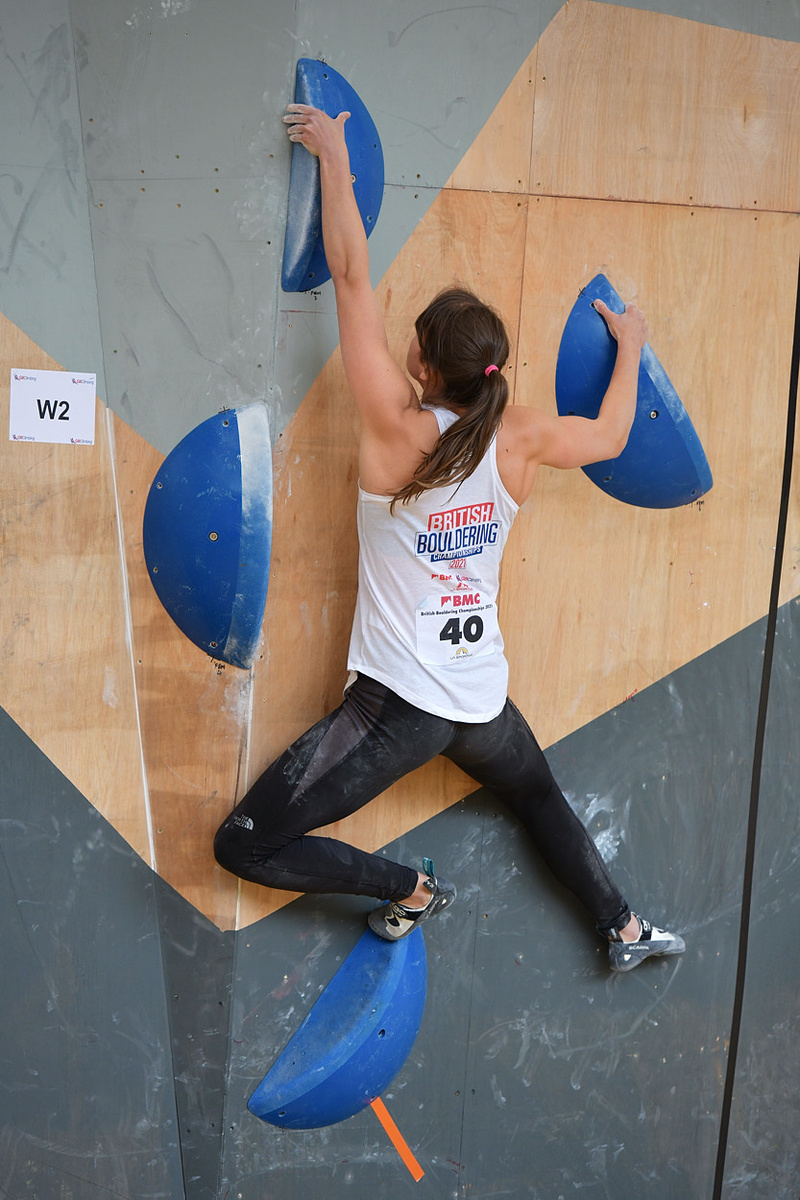 The opposing blobby sloping volumes on W2 was read by many finalists as a dynamic ‘double clutch’ move. Emily Phillips and Tara Hayes however switched up their beta and unlocked W2 using opposing gastons on the initial holds and whilst Tara topped in three attempts Emily took four. It was, however, to be a divisive top for Emily; immediately after unlocking the beta her confidence grew visibly. 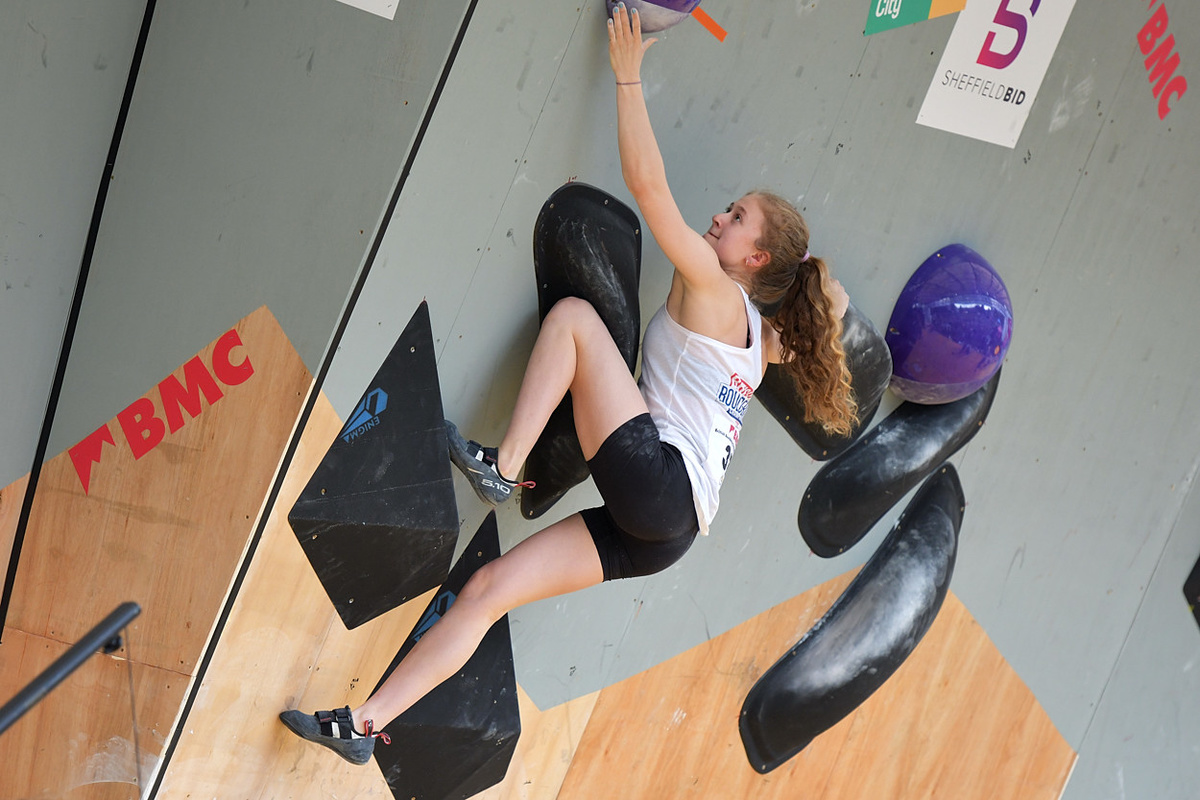 W3 and W4 proved equally pivotal and whilst Emily and Holly topped both, the remaining competitors were shut down.  Emily was clearly on a roll after unlocking W2 and managed to flash W3, a complex and powerful bloc, and then do W4, another powerful dynamic bloc to a knee-bar finish, on her second attempt. 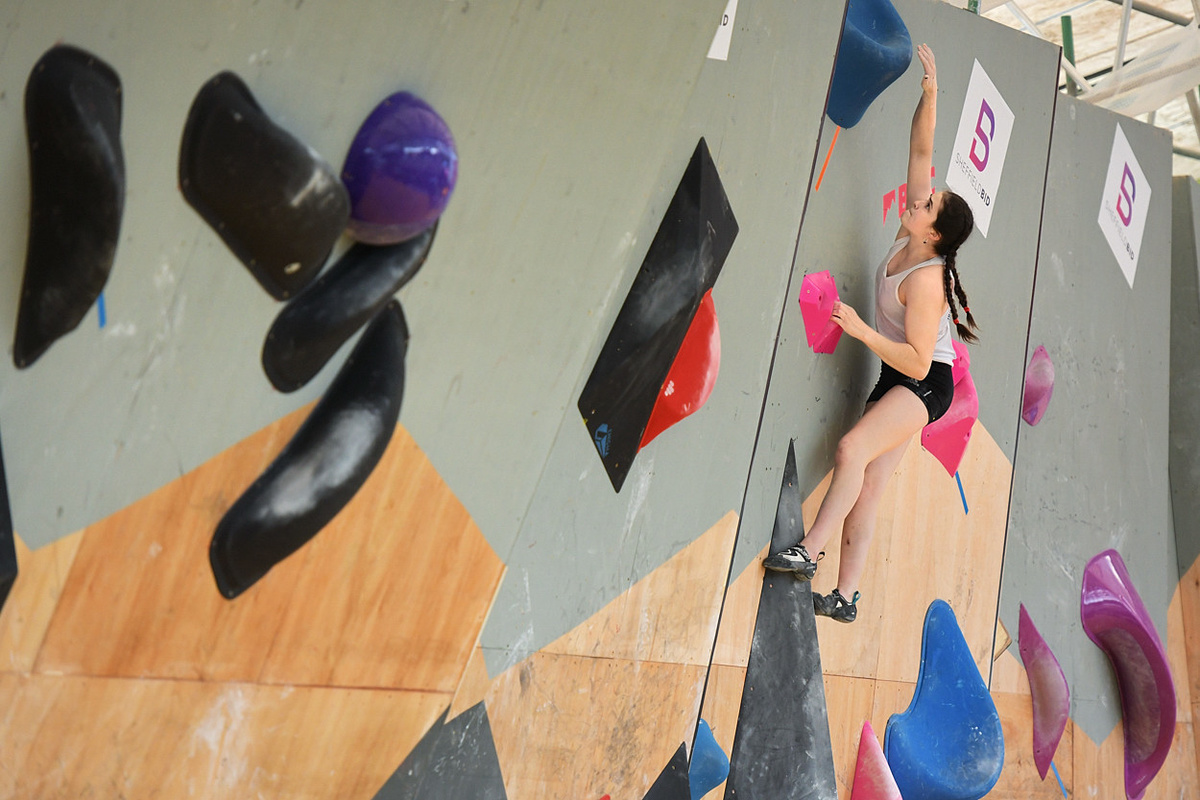 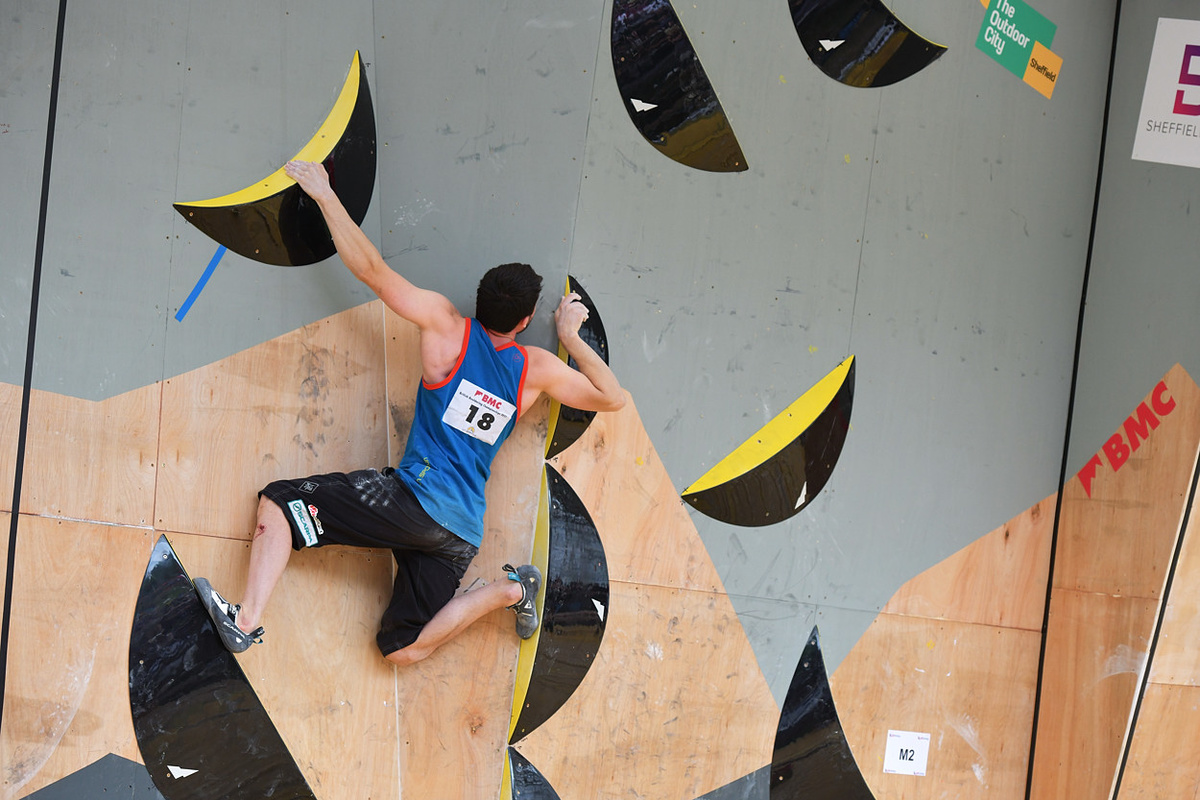 Seldom are there gifts in competition boulder finals but M1 was a close as they come it seemed. All the finalists topped M1 despite the dual-texture slopey opening volume; Max, Billy, Nathan P and Nathan W all flashing it. M2 was a complex series of crescent-shaped volumes; all the finalists got the zone but none topped out. At the halfway stage then it was a very close-run field. 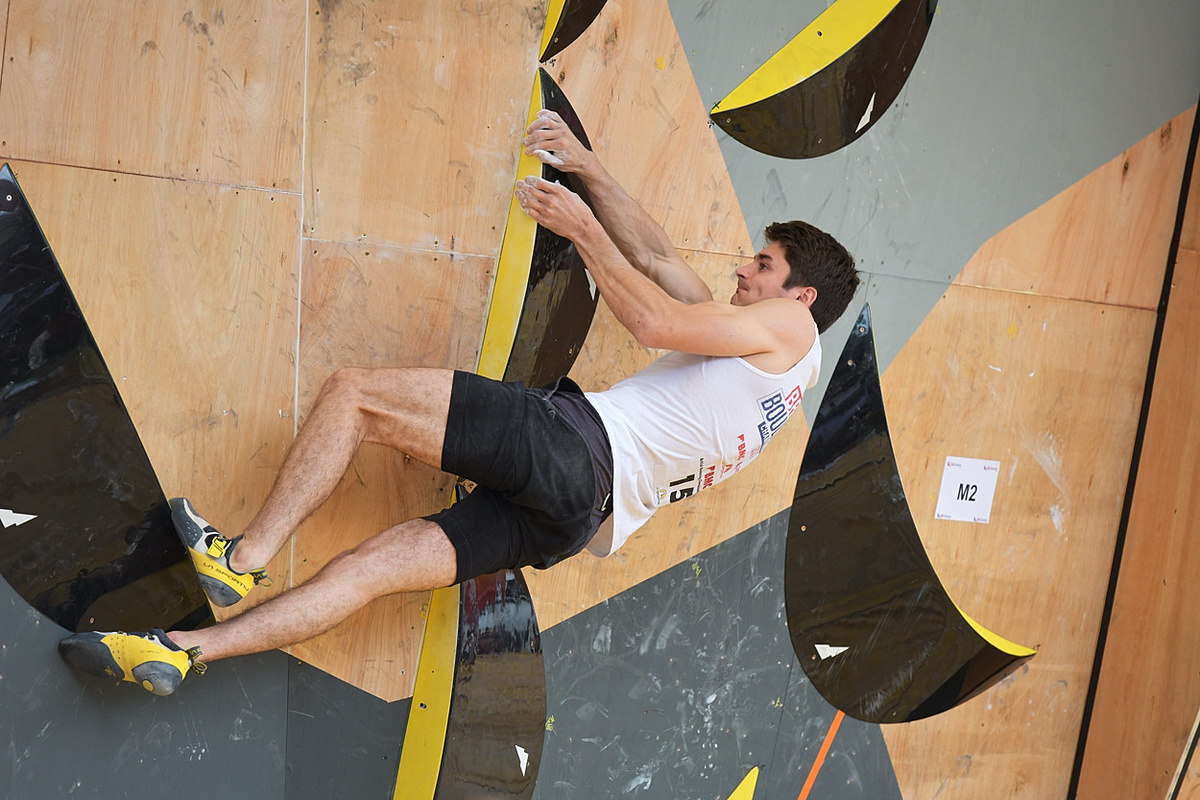 M3 was a little more forgiving and although it saw numerous tops only Billy and Max flashed it. Nathan Phillips, Matt Cousins and Ben Preston all topped on their second attempt. M4 was another “flamboyant” bloc with a double-handed dyno to start with. Fully in his stride and climbing brilliantly, Billy Ridal flashed it to set up a nail-biting finish. Nathan Whaley, Matt Cousins and Nathan Phillips all topped M4 with various attempts but the last man out, Max Milne, would have to flash it to take the win. Showing considerable maturity, Max spent the first minute brushing the bloc before he even stepped up to the bottom. When he did start climbing he moved with confidence and his customary power and style easily flashing it! Both Max and Billy had flashed three blocs and were even on zones/attempts; Max took the win however on countback to the semis.

It had been a super close final; reigning champion Nathan Phillips was edged out into third, Billy Ridal took an extremely well-deserved second but the win went to Max Milne. Max proudly ticked his life goal of becoming British Bouldering Champion off during an interview with Jon Partridge after the event. Having qualified for his first-ever World Cup bouldering final earlier in the season it looks as though the future for @maxthefuture has arrived!

Watch the finals on the livestream below…