Pete Whittaker talks about his repeat of Kaabah

As we reported yesterday, Pete Whittaker has just made the sixth ascent of Kaabah (F8c+) at Raven Tor.CLIMBER has been in touch with Pete re his ascent and can now share his thoughts etc.. 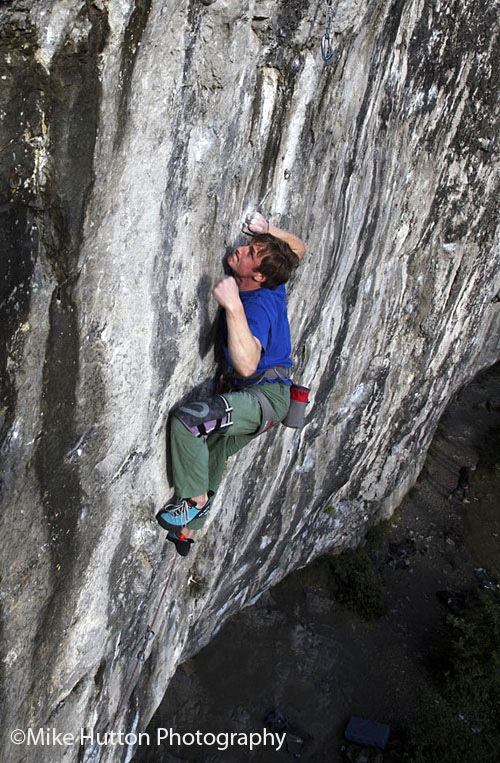 Pete Whittaker on the headwall of Kaabah. Photo: © Mike Hutton. Not to be used without permission

Raven Tor remains incredibly popular with climbers – the easy access, relatively quick-drying and huge collection of well-known test-pieces across the 7 & 8’s grades prove appealing for those wanting to climb hard and/or push their grades.

Mecca and the three extensions – Mecca Extension (F8c), Hajj (F8c) and Kaabah (F8c+) were all first done by Steve McClure between 1998 and 2004. Mecca Extension is reckoned to be the more accommodating of the three and it’s been popular ever since it was first done. Hajj is said to be much harder and perhaps not surprisingly it hasn’t attracted the attention that its siblings have and has had few repeats. Steve’s ascent of Kaabah came during the 2004 Petzl Roc Trip on an especially sunny day in late summer. Since then, Kaabah has seen numerous attempts although has only succumbed on four further occasions before this year; Paul Smitten, Ryan Pasquill, Alex Barrows and Ted Kingsnorth. Several very strong sport climbers were turned away empty-handed last year alone. 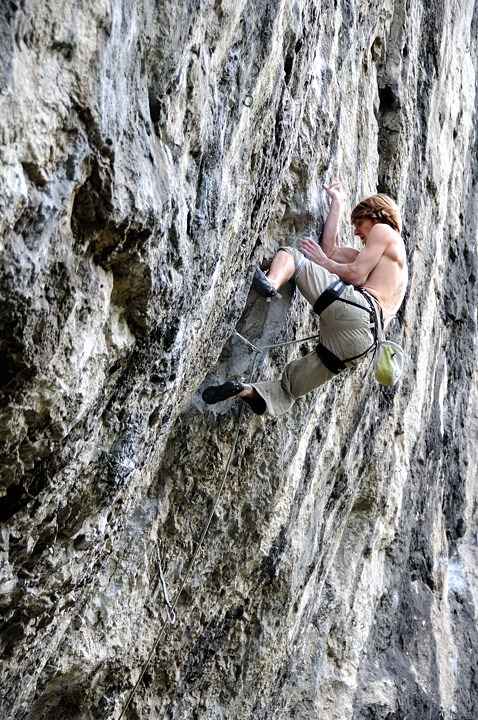 The route starts up Mecca but swings out right where the original routes swings left to the half-height lower-off. Incidentally, this alternative was first bolted by Simon Reed as an alternative and slightly harder finish to Mecca itself. From the shake-out roughly level with the Mecca lower-off, Kaabah kicks-in with a hard, crimpy sequence up the headwall to a junction with Mecca Extension in a shallow corner up which it finishes. Gaining and climbing the hanging corner on Mecca Extension is the crucial section on Kaabah where the difficulty of the climbing is further exacerbated by hard clips. 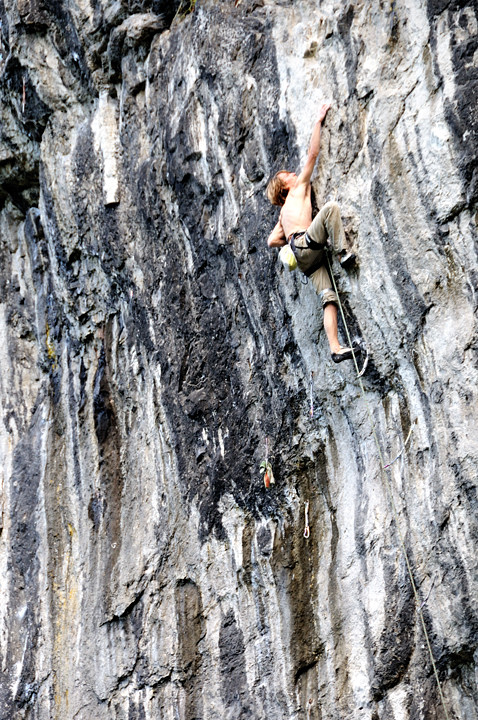 Paul Smitten on the crucial top section of Kaabah in 2008. Photo Keith Sharples

Pete Whittaker had previously done Mecca but had unfinished business with Mecca Extension when a period of debilitating illness grounded him a few years ago. CLIMBER has been in touch with Pete and in the short Q&A below he tells us how he came to try Kaabah.

So well done on sending Kaabah. Before we get into that can you bring us up to date with what you’ve been doing since your Yosemite trip?
When I came back from Yosemite I hardly did any climbing. I didn't feel like doing any more training or even going to the climbing wall, I just felt like resting. So apart from the odd potter down the wall, resting was pretty much what I did. However, in March I had a last minute offer to go out to Spain with my sister, so I went out there and got completely boxed and didn't tick anything! It's only in the last two months I've really started getting back into my climbing again.

Many climbers will know you as one of the WideBoyz - famed for climbing monster off-width cracks. However, you’ve got many hard grit first ascents to your name as well and your trip to Yosemite last year with Tom Randall was a fantastic success. Now you’re ticking hard sport too at F8c+ so is this a new direction for you and the start of a crimpfest campaign or are you just dabbling with a bit of sport for a bit?

When I came back from Yosemite I wasn't really motivated for the Gritstone. I've done a lot on the Gritstone over the last 8 or 9 years and as much as I love it I did feel like I needed to do something different, except at that point I wasn't quite sure what I wanted to do. I had a short trip planned to Norway to try Recovery Drink which is a fitness based 8c+ crack climb. Although the trip was only planned to go and check the route out I didn't want to be a total flop when I got there (as I'd done no training for anything up to this point). I wasn't keen on delving into Tom's cellar, so I decided to go to The Tor to finish off Mecca Extension which I had tried three years previous, but got ill before completing). I thought it would be good to finish off unfinished business and reasoned it would be good to just pull a few hard moves before going out to Norway. That was a month and a half ago and I have just kept going back down to The Tor. It has been motivating to try and do something different from what I normally do.

We’ve all seen the vids of you and Tom pumping out heinous training routines in the wooden cracks in Tom’s cellar – meticulously preparation seems to underpin what you do climbing wise. Have you been training like a beast for Kaabah and if so what was your regime?
I did no specific training for these routes down The Tor. I just decided to go down there and give them ago. I think it's a very British thing to be cool and blasé about training and make people think that you're not doing any when you blatantly are, I find this annoying so I'm pretty open about how much I do which is a lot when it's for an important trip i.e. Century  Crack, Cobra Crack or Yosemite). However, I have massively surprised myself in getting up these sport routes as all I've actually done is just go and try them. I guess my past training gave me a good start.

Kaabah has slowed down some darned good sport climbers over the years so you must be really chuffed to nail that pretty quickly? Can you tell us a little about how long it took and the process you went through?
It took me 4 sessions (I think?) to do Mecca back in 2012. I re-worked Mecca this year when I did the Extension. I think Kaabah took a further seven sessions with Mecca worked out.
When I started to redpoint, I could just about scrape up Mecca to the resting point on Kaabah. Because Mecca had taken it out of me, the top section felt too hard. After a few redpoint sessions I built up the fitness on the lower section and suddenly I could head into the crux feeling pretty fresh.

We saw you a couple of weeks back on Kaabah skipping some of the clips on the crucial headwall of and taking a pretty big fall as a consequence when you fell off high in the shallow corner. You’ve obviously got a pretty good head for taking falls and do you think that the other climbing you’ve done over the years helps you push-on like that or does sport climbing just feel so safe to you that you dismiss taking longer falls?
This was one of the biggest problems of the route for me. There are 3 bolts in the crux section and my plan was to just clip one of them. Initially I had the plan of skipping two and clipping the third from the heal hook on the Extension. When I got there I couldn't clip the bolt because I was so pumped, I had a mini dilemma mid-crux on whether to skip all three and push to the top or pump out and fall off. I'm glad I didn't carry on to the top as it's easy to get your leg the wrong side of the rope on the last move, which would end up being dangerous and that’s certainly not what I wanted. In the end I clipped a lower bolt and it worked out better. When I'm psyched for something I have no problem at all taking big falls.

Kaabah is one of the harder/hardest sport climbing routes you’ve done. What’s next on the agenda – maybe an F9a or is it back to cracks again or even back to Yosemite or somewhere else?
Yosemite later in the year and I need to start training for that!

CLIMBER would like to thank Pete for his thoughts and we'll be watching carefully how his trip to Yosemite unfolds later this year.