Pete Whittaker solo's 150 extremes in a day in the Peak 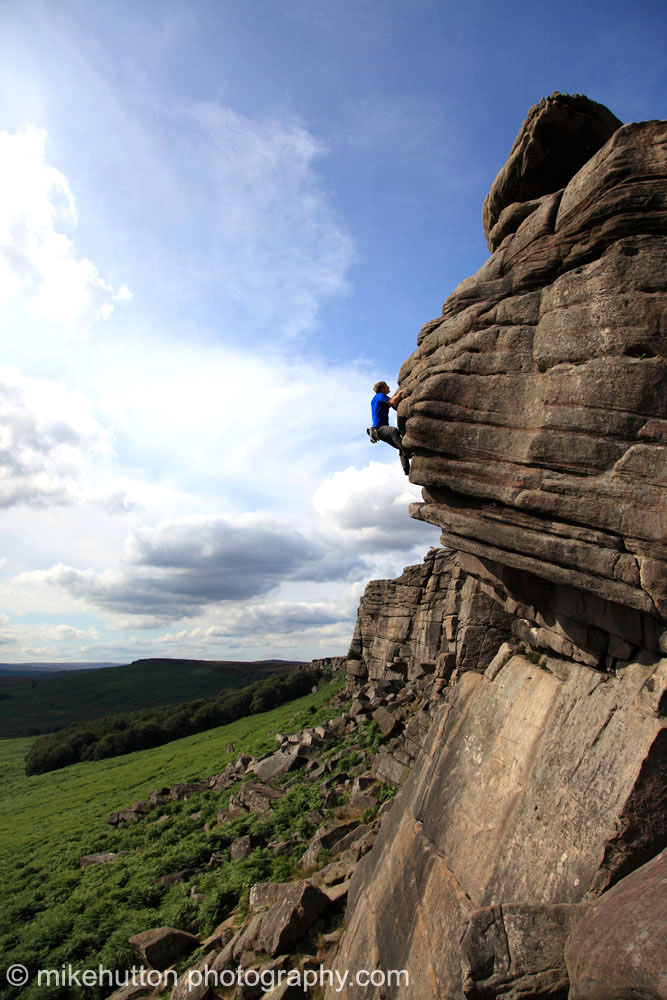 After only what seems like days since James McHaffie’s amazing solo of 100 Lakes extremes in a day Pete thought he’d get in the act but incredibly managed 150 grit routes in total and on one of the hottest day’s of the year. His inspiration was Ron Fawcett back in the day who soloed 100 in a day up to E5 in difficulty. Pete managed to climb up to E6 with Nosferatu at Burbage South.

Pete takes up the story,

“On Monday I went out on a bit of a mission to go and solo some extremes in the Peak District. I have wanted to do this ever since I did the 550 routes in a day (so 6 years ago now) I have a few trips and projects coming up soon so a big day out soloing and doing lots of mileage on rock seemed like excellent training for it.

Ron was the original inspiration behind doing this as he did 100 extremes back in the day. Ron’s day on the Grit is mind blowing, the routes, difficultly and diversity on his final tick list is absolutely outrageous and I still think its one of the most impressive days out there, even for 2014. His standard goes up to E5 and not just one or two E5’s, multiple, really impressive.

I wanted to try and take into account as many of the ‘big’ crags as possible as they all offer different types of climbing, which was the whole point, some are more pumpy, like the cracks of Millstone, some are slopey like the flared breaks of Stanage and some are bold like the slabs of Froggatt (not that the bold made much of a difference). I had been checking the weather for a couple of days, booked a few days off work and hoped for some good conditions. Conditions looked good in that no rain was forecast, but the temperatures for those slopey gritstone breaks didn’t look ideal. 25 degrees in the Peak District were predicted and lets put it this way, it didn’t fail to disappoint, It was an absolute scorcher!

I decided to go for a reasonable start to try and get some better conditions on Curbar and Froggatt. So at 4am with Mike Hutton I set off on a couple of Curbar warm ups. Right Eliminate for breakfast was an eye opener and I had to try on it considerably harder then usual which was slightly annoying considering it was only route 5 of the day. Curbar went pretty smoothly, although a couple of English 6b routes did provide a bit of a fight. After finishing Curbar it was a short walk to Froggatt to start the same process again.

I could feel my arms a little bit from the burl fests of Curbar and had to be careful going straight onto the slick cracks of Stiff Cheese and Beech Nut. However after passing these things eased on the arms and I was able to give them a really good rest. Froggatt is all about slabs, with confidence in the feet you can rattle off a number of routes with relative ease. After losing Mike after he got lost trying to find the Strapodictomy area (I found him again in the bracken, bush-wacking) I finished off Froggatt and moved onto the pumpy cracks of Millstone.

Walking into Millstone I wasn’t really sure whether I was going to enjoy this stint very much. However it turned out to be the most enjoyable part of the day. With it still in the shade, it felt brilliant to be locking fingers and hands in cracks and swim up jams rather then holding onto ever greasing smedges. I think the most enjoyable route of the whole day was Regent Street, I felt nicely warmed up from the previous crags and the climbing is excellent.

The 4th crag of the day was Burbage South and although still in the shade when I got there I could definitely now start to tell the difference between the conditions at 4 in the morning and now. I know the solo circuit at Burbage South pretty well as its one of my favourite and most visited crags, but even so conditions made it that bit tougher then usual and I ended up having to miss out a few of my regular solos that never even feel that hard. After a major bush-wack through chest height bracken down to the path and a walk to Burbage North…

… that was it, no more shaded crags. The sun hit me hard. The rock was burning to touch, not a breath of wind blowing onto the crag and the experience of climbing in the full blazing sun was horrendous. The pace seriously slowed, and being the shortest crag with probably one of the least amount of routes on it, it was quite alarming how long it took me. About 6 routes into Burbage North I was actually close to throwing up from heat stroke. I think the tally clocked in at around 105 routes after Burbage North and I was very pleased to be moving on. The crag which was meant to be easy had taken by far the most out of me.

Luckily at Stanage there was a slight breeze and after 10 minutes of climbing I felt completely energised again. Even though Stanage was in the sun, just that slight breeze made all the difference. After gradually working my way through the easier stint of the 150 and grappling with flared greasy breaks, my Mum, Dad and Sister came out to see me finish up the classic Millsom’s Minion 16 hours later. What a fantastically hot, long but pleasing day and good bit of training.”

Training indeed and he had plenty of support along the way, none so than Mike Hutton who photographed many of the routes, and kept Pete company along the way. Climber will be featuring a gallery of images about the day from Mike in a future edition of Climber.

Photograph - Pete Whittaker soloing Flying Buttress Direct (E1 5b) at Stanage. Thanks to Pete for the words and Mike Hutton for the photograph. You can see more of Mike's photography here.