Days before heading out to Utah with Tom Randall to try The Crucifix Project, Pete Whittaker wrapped up his preparation with a one-day ascent of the Vedauwoo ‘Big 5’. 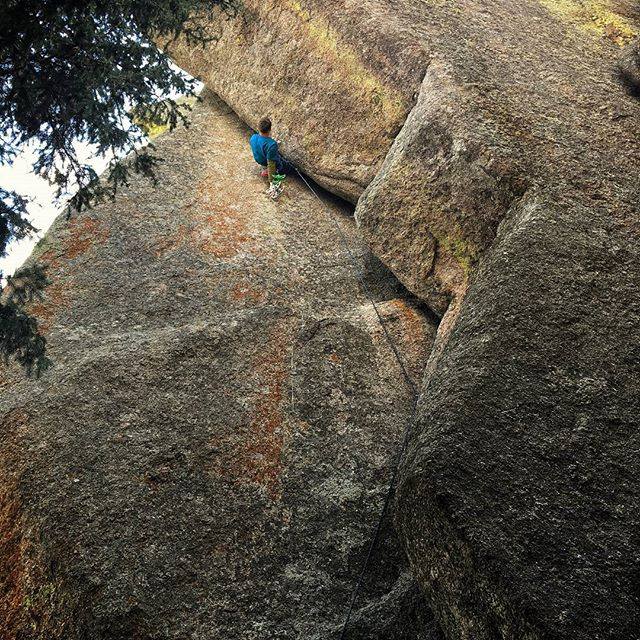 Pete Whittaker in an all-out fight on his all-trad, on-sight send of Forever War early in his Vedauwoo trip. Photo ‘Slim’

Pete’s trip however was just about the ‘Big 5’ as he also pulled-in a number of other significant sends in his four week visit to what he describes as “crystal grazer land”. As usual Pete’s trip involved near obscene levels of crack-induced suffering – something which he – and fellow WideBoyz – Tom Randall revel in!

Pete’s first major bag was an on-sight, all-trad ascent of Forever War – Vedauwoo’s hardest offwidth going at hard 5.13. First climbed in 2012, a year after Pete and Tom’s first trip to Vedauwoo, it was on Pete’s radar as a route to do as he explained on-line; “The offwidth myself and Tom never got to try on our 2011 trip (as it hadn’t been established) has been on my list for 5 years ever since it was put up in 2012.” Pete describes it thus; “It feels too steep to climb right side up, yet too vertical to climb wrong way in (invert). A slight conundrum! A wrong way in, then right side up shuffle is what is required for success.”

Pete goes on to describe the subsequent battle; “After some awkward shuffling and realising that right way in was wrong side up, right side down was wrong way out and flying pirates were better than angry pirates, I ungracefully found myself half smeared in a flaring lip flailing around in some unfitting chicken wings.

I guess it’s at this point where most people, dislike the pain, despise the lactate and decide to whimper the infamous ‘take’. Over the years I’ve actually come to like this part of the route more than the saunter to get there, pain is my friend, so I relished it and heave ho-ed my way to the top in plenty of it.

Although not my hardest offwidth on-sight, I’m pleased to put in a solid effort on this one as it’s certainly one of Vedauwoo’s hardest.”

Not one for resting on his laurels, Pete then set himself a mighty challenge to finish off his visit – a one-day ascent of the ‘Big 5’; Vedauwoo’s hardest wide cracks – Forever War aside. Pete explains his thinking; “The challenge was a gauge for myself to see if I’d improved and to secure in my head that the FAs Tom and I had done and projects we have out in the desert are infact quite tricky, and it wasn’t just me being a big floppy wet lettuce why I struggled so much or haven't yet done them.” In short, the challenge was to climb Squat, Trip Master Monkey, The Wing, Lucille and Spatial Relations in a single day.

Without practicing any of the routes again, Pete managed all five of the routes in just under 9 hours of climbing. Trip Master Monkey was Pete’s last route and it didn’t go down without a fight as Pete explained; “rather than climbing I proceeded to somehow fall upwards, with only a last second realisation of a foothold saving me from the plummet. I was so pumped on the exit my hand had crammed into a claw shape, so I invented the 3 finger claw jam to exit unstylishly.”

Pete has now moved on to Utah with Tom Randall to try The Crucific Project. The WideBoyz ride again!

To read all about Pete’s other Vedauwoo’s efforts click through here or to stay in touch with the WideBoyz click here.