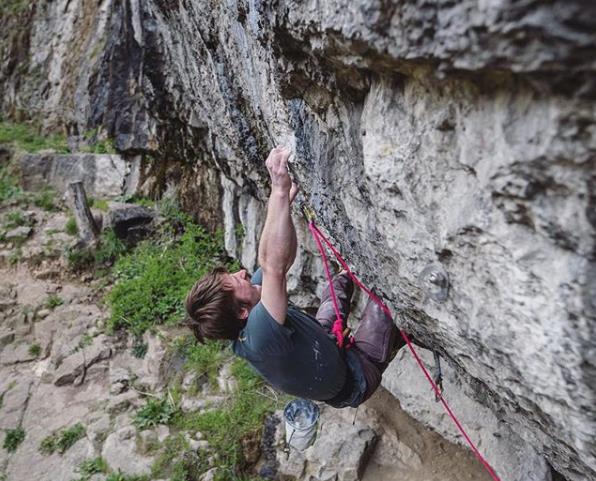 Back in 1990 when Ben Moon did the first ascent of Hubble he created a beast. Since then, it’s only had a handful of ascents despite being one of the world’s best known test-pieces. Over the last few years it’s widely become accepted that Hubble is actually F9a rather than F8c+ which Ben originally gave it. Perhaps with national pride a subconscious factor Alex Megos who did the sixth ascent in summer of 2016 thought that Steve McClure’s adjacent route Kaaba (F8c+) was harder. Many don’t go with that view however, Will Bosi, after his seventh ascent, reckoned it was F9a and Font 8b+. Irrespective of the grade, an ascent of Hubble is a world coveted prize which Pete Dawson has now added to his CV.

Great result and tenacity getting Hubble in August; how long has it taken you and what have connies been like?

Thanks! I first tried Hubble in November and then tried it on and off for much of this year. I lost count of how many sessions but it’s probably over ten and under twenty. The conditions have been good mostly, the holds on Hubble are quite sharp so they are relatively unaffected. A tree gives dappled shade which is very nice.

It’s just over a year since you did Rainshadow, was that a conscious decision to concentrate on Hubble which is much shorter and hence much more powerful and did you train on a replica as many climbers seem to do?

No not really. I’d always liked Raven Tor as a crag and I was psyched by the history of the route and the moves are mega. Although to climb Hubble I had to focus on gaining strength more than I have done previously. I did this by doing really basic strength work on the fingerboard and then applied it through the training board at the Depot Manchester. My replica was the actual thing! I’d try loads harder at the crag with people supporting me.

Despite being nearly 30 years old it’s still only had a handful of ascents; do you see that set to continue or do you think more people might get involved with bouldering levels on the increase?

I hope there will be some more ascents now I’ve done it. The route is compact with small moves which is not the usual style of training boards which usually revolve around doing quite big moves. So I think it is still very difficult to gain the specific ability on it. Pulling 1-5-9 isn’t enough.

The grade debate over Hubble has been quite involved over recent years; what’s your take on it both as a route and a boulder grade?

The only thing I can do it compare it to Rainshadow really. It’s harder than that for me as it took me more sessions. It’s at least an 8B boulder, it may be harder, I’ve not tried any 8B+’s.

Going forward, what’s your plans now for the rest of the summer?

For the rest of the summer I’m going on a climbing trip to the alps and hoping not to get too weak before getting back on hard stuff in this country in autumn!