James first looked at the route back on 2008 and set his sights on the lead recently, spending a couple of weeks of concerted effort on the route and making the fastest repeat to date of the original sequence first climbed by Dave MacLeod back in 2006. This is the fourth ascent of Rhapsody E11 7a following repeats by Sonnie Trotter and Steve McClure.

As part of the build up to climbing the route he spend a few months of training at his home in France before he returned to the UK, first with a trad trip around parts of the UK with Yuji Hirayama where he flashed Something’s Burning at E9 (read here) before heading north to Scotland.

Success came after working on various aspects of the route, breaking it down into sections and first trying to lead it with the gear in place, taking the monster fall off the headwall. He finally lead the route placing all of the gear. 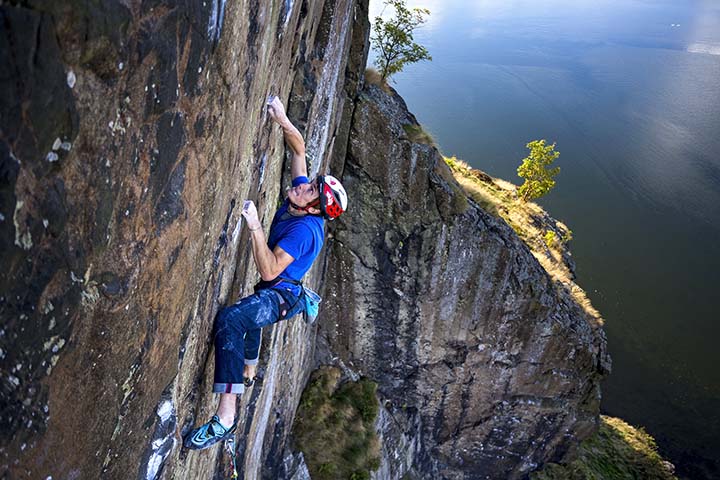 He commented “Rhapsody is hard, it’s really hard in fact, and a giant step up from any Trad route I have done before,” continuing “When I finally topped out on Rhapsody, I guess you could say it took me 6 years, 5 months, and 5 tries :-) It’s a route I thought I’d never do, for several reasons, and ironically it was only after topping out that I realised how much it meant. I climbed the route placing all the gear on lead, using the same sequence as Dave. Which is something I felt I needed to do. The last thing I need is more criticism. I actually climbed to the top on my 3rd try, but the gear was in place from an earlier attempt.”

James originally dismissed the route back in 2008, naively thinking his own route in Devon, The Walk of Life, was a grade harder at E12 (and is now E9). James wrote on a recent blog that Rhapsody was “a route that I had tried just before leaving the UK, had failed on, and to make matters worse had openly criticised rather than accepting defeat.  It was a chumps move, the act of an arrogant immature kid, but the past is the past and there is no way I can take that back.”

Moving forward he realised, with some convincing from Caroline that he should return and put this demon to bed, “It was Caroline who first suggested going back to try Rhapsody, more than one year ago.  I dismissed her as crazy, and explained all the reasons I didn’t want to climb the route, and left it at that.  So did she, as by now Caro has worked out the best way to change my mind, is to plant the seed, and let it grow.”

James was filmed on the route by Hot Aches Productions, notably Paul Diffley and Chris Prescott,  who are currently woking on a new film about James, Redemption: The James Pearson Story, which they are hoping to premiere at the Kendal Mountain Film Festival in November.

You can read more at James's bog here