By stepping on the summit of Shishpangma on at 08:58 local time (00:58 GMT) on 29th October Nirmal 'Nims' Purja MBE ascended all of the 8000m peaks in just 6 months and 6 days, and according to his website, ‘smashing the previous record of almost eight years and taking his place in mountaineering history.’ 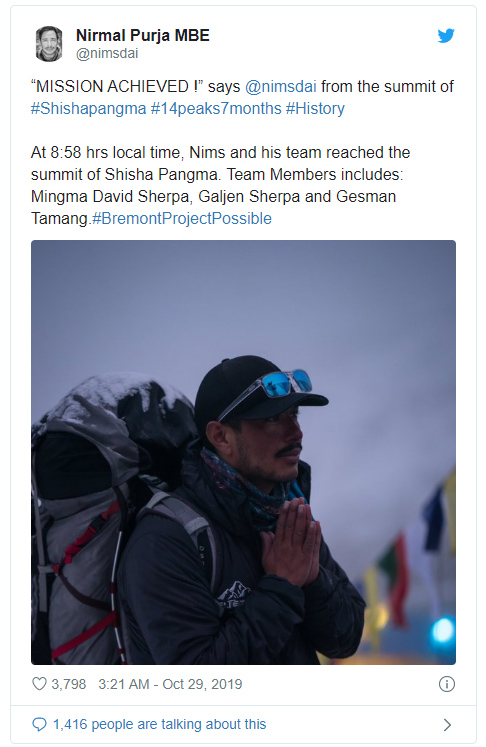 He commented, “I am overwhelmed and incredibly proud to have completed this final summit and achieved my goal of climbing the world’s 14 tallest mountains in record time. It has been a gruelling but humbling six months, and I hope to have proven that anything is possible with some determination, self-belief and positivity. I could not have made it happen without the unending support of my friends and family who have been in my heart this entire time. We started with nothing, but look how far we’ve come,”

“I believed in this project and I made sure to surround myself with people who believed in it too. This was never just about me, which is the reason I’ve been able to overcome some huge obstacles on this journey. By achieving this goal, I knew I could inspire people from all generations, across the world,” added Nims.

This is a remarkable achievement and Nims joins a list of just 40 climbers to have completed this feat but in a much faster time of course. Remarkably the ex-soldier didn’t start climbing until 2012 when he visited Everest base camp.

You can read more about it at Nims website https://projectpossible.co.uk/