As we report earlier, William Bosi become the youngest ever Brit to climb F9a when he nabbed the sixth ascent of Rainshadow at Malham over the weekend. 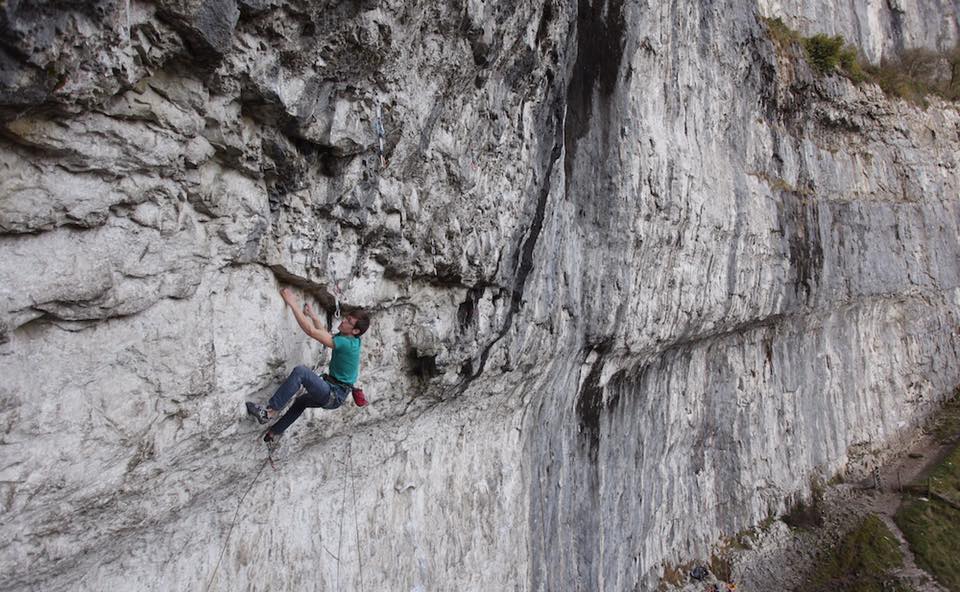 Steve McClure’s Rainshadow has seemingly become the ‘must-do’ F9a for Brits aspiring to join the coveted F9a club on home soil. Originally climbed by Steve in 2003, it was Steve’s third F9a after Mutation at Raven Tor and Northern Lights at Kilnsey. Rainshadow was in the news a lot last year with both Ben Moon and Stuart Littlefair clipping the chains over the summer/early autumn.

William Bosi however, is the youngest climber by some margin to climb Rainshadow. Famously Ben Moon topped out last year just days before his 49th birthday. Bosi’s ascent of Rainshadow makes him the youngest ever Brit to climb F9a. Previously, Malcolm Smith, then aged 18 years, emerged from his Scottish cellar to make an early repeat – one of the few – of Ben Moon’s Raven Tor test-piece, Hubble. At that time Moon graded Hubble F8c+ although with the passage of time and in comparison with other routes around, even Ben has accepted that Hubble is F9a. As such it was the first ever route of that standard in the world and Malc’s repeat give him the crown of youngest Brit to climb F9a. Fittingly, albeit somewhat belatedly perhaps, Bosi now has that title.

CLIMBER have been in touch with Bosi with a few questions…

Congratulations on nabbing the sixth ascent of Rainshadow - has it sunk in yet?

No not yet I still can't really believe it! I also haven't stopped smiling since, it feels amazing!

There are some pretty good climbers trying Rainshadow at the moment, were you feeling any pressure to get the job done?

On that note I did steal quite a lot of beta of Ryan Pascal who was there a lot of the time I was. However, I didn't feel any pressure in that respect but I did put a lot of pressure on myself which wasn't great as I really wanted to climb it.

By all accounts you haven't had many days on Rainshadow. Can you remember how many days in total and secondly when did you think that you'd be able to do Rainshadow?

Well it's by far the longest I've ever worked a route but I did only end up spending 8 days on the route. I knew that I could do the route after my first go on day one as all the moves went down very quickly and I believed linking it would only take a bit of time and luck.

You, and others in your cohort such as Jim Pope, seem set to do some amazing things assuming you can sustain the effort and commit for the long haul. It's great to see you young guys getting stuck-into the routes outside as well as getting ‘youngest ascents’ and so on. Is that stuff important for you or are you just keen to get on with the climbing done and let other throw the stats at you?

That stuff is quite nice to be able to say but definitely only a bonus and doesn't really mean anything in my opinion, it's definitely about the climbing itself and getting on the routes that inspire me the most grade regardless.

Rainshadow crux is said to be Font 8A but that comes after doing Raindogs without the chain grab (obviously) which bumps Raindogs up to F8a+ so you've been working some endurance stuff too presumably?

Yeh I mean I've always considered myself a route climber so I have done a lot of endurance over the years with a lot of circuits! However I've been focusing a lot on bouldering and strength training lately.

Malcolm Smith has also posted on FB saying "An incredible effort from 17 year old William Bosi. Excited to see what the future holds..." Others have suggested you get straight onto Overshadow (F9a+) to the left and see if you can't add your name to the (very short) list of Brits that have climbed F9a+. Is that your plan?

It's an interesting one as I am psyched to try that route but I have so many other routes/boulders I want to get on first so I'm not sure. I don't really have much of a plan apart from fitting in what I can around my exams and comps.

So there you have it – the word according to Will Bosi - the youngest Brit ever to send F9a.

Finally, to see a clip – shot by Hot Aches - of William climbing the crux of Rainshadow in slo-mo see below. We understand that Hot Aches are doing a film about William so make sure to watch out for that in the future.