Pete Whittaker has just repeated Recovery Drink in Jøssingfjord, Norway. This is the third ascent of this steep crackline, considered to be F8c+, following the first ascent by Nico Favresse in 2013 and Daniel Jung last year. 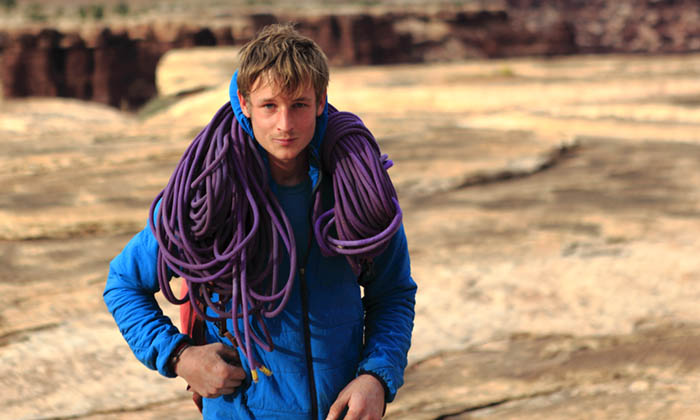 Pete sent the following details through to Climber about the route, the process and the final ascent:

‘Can someone hand me the Bakewell Pudding please, I've finished. Forget a recovery drink, I'll take some recovery pudding instead.

After three specific trips last year, I had a sore right hand from repeatedly stabbing at the same jam. My right heal was left wondering why it was trying to do some bizarre and contorted sequence above my head, whilst squeezing the most tenuous position on the route. And my stomach was rumbling at my first concerted effort to not be 'Beefy Pete' but actually have some lean and lightness about me.

I wandered away from the final trip of 2018, to Recovery Drink, with an empty right hand, a pointless right heal and an unhappy belly, saying 'feed me, you bastard.’

After a short regroup, and analysis of what went wrong, the conclusion in my head was...

With this in mind I decided to start phase one of 'getting it right'. I hit the treat shop hard and went from my lightest ever weight to my heaviest in six weeks (six whole kilos gained), solid work, and it felt so easy to do. I was incredibly happy with the initial progress. I recall it as one of the happiest periods in my life; Climbing big walls and eating cookie dough until it seeped from my eyelids (although I've still yet to complete the cookie dough challenge).

My plan was to beef up, and train beefy. But also not too start training too early as motivation can sometimes dip. Christmas, New Year and Spring came and went and I was still perfecting the beef and not starting the climbing related stuff too early. Recovery Drink training couldn't have been any easier if I'm being honest with you. 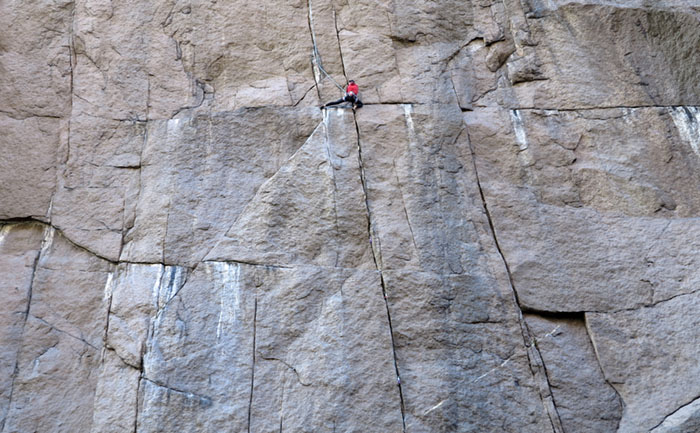 The line of Recovery Drink.

By springtime there was still a niggling factor which hadn't been erased in my mind, and this was ‘how was I going to get around the whole 'weak person’, foot above the head beta’… because realistically it wasn't the way.

On a passing visit, May time, I revisited the moves (now as Beefy Pete) in an attempt to eradicate the foot nonsense. Some folk seem familiar with the ‘karate move’, or if you’re not, essentially it’s the crux throw (or stab) to a hand jam. To catch the jam is the crux. The beta I was using did in fact make this move easier than how others were trying, (I was going thumbs down into the jam, rather than thumbs up), so I did catch the jam on multiple occasions, on previous trips, without so much fuss. The problem for me came afterwards - matching the jam. Matching with your hand in the thumbs down position - in a word - desperate. Hence all my foot above the head shenanigans.

With foot nonsense eliminated, it was now time to stop being so beefy, get in climbing shape and lean up in a better, happier and healthier fashion than last time. I made solid progress and gradually turned The Works’ yellows into orange, 20 mils to 10 on The Beastmaker, and 50 to 70 kilos on the bar. Nay bother.

Heading to Norway - I left the shambles of the crux replica in Tom’s garden [Message from Tom one week prior to going: don’t go on the 50 degree board again, I think it’s not that far off collapsing - classic quality construction], lapped and feeling solid, (that’s solid, as in I was feeling good. Not the construction…)

It was interesting coming back to the route and seeing my doughnut jam (or is that jam doughnut?!), as an ‘in shape’ Pete. It felt better than I remembered, unfortunately though…I couldn’t eat it

At the end of day two on the route I decided to have a little redpoint attempt. I wasn’t expecting much, more a cheeky look to get the initial lead out the way. You know take a fall, get used to the wall again.

Miraculously I found myself mid crux with some power in the tank. Not much, but some, and albeit feeling the sag, some is always enough for something extra to happen. Left heal went on for the match and it didn’t come off, which was a surprise, because I was milking it much more than the hold really allowed. I realised I better carry on, so shut my eyes to try harder and fondled for the jam doughnut. I then realised I couldn’t see a bloody thing, so opened them again, found I was still connected to the wall, flipped my hand the ‘correct way’ and unbelievably found myself established beyond the crux. Blimey! The top crack is no formality, I was just thankful I’d re-familiarised myself with its intricacies.

It was kind of anticlimactic, I wasn’t supposed to do it now; second session of the season. But I guess everything just went a little smoother this time around. I’m sure the recovery drink for Recovery Drink is meant to be some strong Belgian beer, and although I feel strong, I’m not Belgian and I don’t like beer, so a good cup of British Yorkshire tea it is, (yes I’ve brought it with me).

I’m pleased with my performance here, but on the cracks its always only half tick until double tickage. Tom is busy running around the Lake District at the moment preparing for other projects…But, Randall - when you've finished running around and beefing up your sparrow legs, I'm with ye for it!’