Activist, Dan Turner, has reported that irreparable damage has been done to most of the holds on the problems at Whitehouses, North Yorkshire and a ‘no climbing’ sign screwed to the rock. 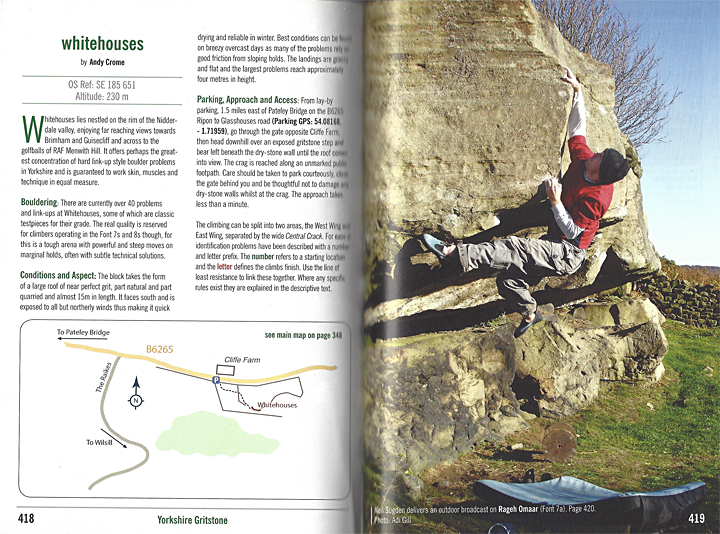 It is believed that this action was taken by, as yet persons unknown, in response to inconsiderate and/or poor behaviour by what is thought to be a minority of climbers. Access to the crag, now obviously considered to be ‘off limits’, is somewhat irrelevant given that the majority of the holds have been hammered off.

Whitehouses, perhaps the ultimate roadside, high standard, weather-friendly bouldering venue in the area, was home to three dozen or so high standard problems and link-ups in a splendid open position overlooking Nidderdale. Flat grassy landings beneath the various problems and link-ups was also part of the attraction of Whitehouses. South-facing and exposed to all but northerly winds, Whitehouses was a short one minute walk-in. If it sounds little short of perfect then yes, in short, Whitehouses was a dream crag for hard bouldering!

Sadly however, the car-parking and access points for Whitehouses were adjacent to the nearby farm. It is understood that car-parking issues, such as climbers blocking the gate, as well as poor behaviour has led to frustration. The BMC’s local Access Representative had been mobilised and was part way through negotiations with the land owner/tenants. However, it’s now obvious that the aggrieved parties were so frustrated that they took matters into their own hands and smashed the holds off the problems and screwed the ‘no climbing’ sign to the rock.

Unfortunately, Whitehouses isn’t the first such venue that has been lost to the climbing community as a result of poor behaviour on the part of some climbers.

As a climbing community we need be aware of the access situation for the crags we visit by checking both the guidebooks and the BMC’s Regional Access Database (RAD) which has all the latest info. Critical issues are; car-parking, crag access/egress point, excessive cleaning, on-crag behaviour such as being noisy as well as the old favourites such as leaving rubbish and/or other detritus.

Climbers can consult the RAD by clicking here.

Dan Turner, one of the area’s bouldering activists has made a short video about the current situation at Whitehouses – see below. Sadly, it makes for a depressing watch!!