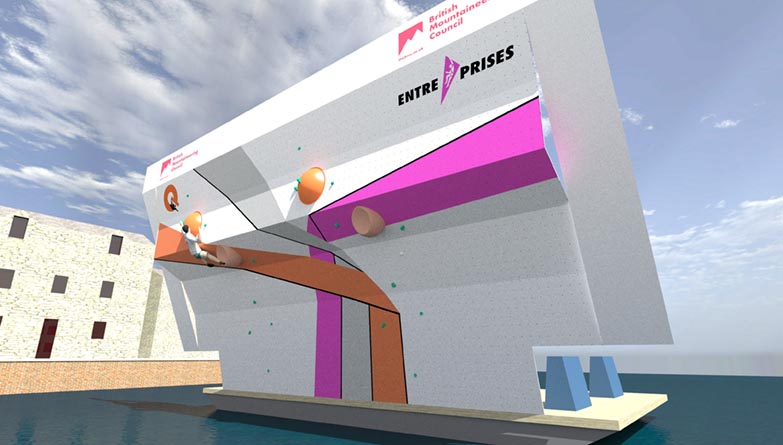 At the end of August, on the weekend of 30th and 31st, Exeter will play host to the UK’s first inland deep water solo competition.  Staged by the Quay Climbing Centre, the event will bring the first outdoor artificial psicobloc to the UK.  By a chance of geography the climbing centre is situated right next to Exeter’s canal basin, making it the perfect location for such an event with a deep waterway located right next to a large open Piazza from where spectators will have a fabulous view of the climbing in action.

Standing just over 7 metres tall and 12 metres wide the competition wall, which has been built by Entre-Prises UK, boasts a 3 metre overhang and has been designed to enable three competitors to climb simultaneously on routes ranging from V1 to V14.  Blokfest veterans Gaz Parry and Mike Langley will be setting the routes, together with well-known local setter Gav Symonds. They are promising challenging and interesting problems using the latest Entre-Prise designed holds and volumes. Top outs may be possible but it is just as likely that competitors will fall into the water with a splash mimicking the experience of deep water soloing on real rock and making for a great spectator experience!

The competition sold out within a month and over 180 climbers are expected to make their way to the city for the event which kicks off on Friday 29th August with an evening talk by UK deep water solo legend, Neil Gresham and US climbing star Sierra Blair Coyle.

The unique and quirky nature of the event has attracted many of the UK’s top climbers, with over 40 sponsored and team GB athletes joining the open competitors at the semi-final stage on Sunday 31st. Teams have been entered from major industry players including La Sportiva, Scarpa, DMM International, 5.10, Evolve, Boreal, Tenaya and newer players such as Alpkit. The climbers in these teams include Steve McClure, Ed Hamer, Emma Twyford, Jordan Buys, Naomi Buys, Sam Hamer and Leah Crane. The Quay is even entering a team of local up and coming climbers from the region.

DWS Exeter promises to bring the best of the best in deep water solo together for the first time in the UK. Neil Gresham, who will be competing for Team La Sportiva, said: “this event is one of the most exciting things to happen on the UK climbing scene in years. Deep Water Solo Climbing is one of the most visual and free forms of climbing you can experience. This will not only be fantastic for the sport of climbing in general but will do wonders to promote it locally in a region that has a lot to offer those looking for a Deep Water Solo adventure. I can’t wait for my chance to go head to head with Britain’s best climbers!”

The event will take place across the weekend with qualifiers on the Saturday and the semis and finals held on the Sunday. Talks by athletes will take place on the Friday and Saturday evenings with food and a bar provided by the Quay’s Workshop Café and there will be plenty of boot demos and other activities hosted by the event’s sponsors and the climbing centre. Paul Russell, Centre Manager and event organiser said “our aim is to create a high quality weekend of climbing that has broader appeal to climbers and locals alike. If DWS Exeter works who knows where we can take it next year.”

Climber magazine will be there to cover the event so expect to see a report both on the website and in the magazine where there will be a gallery of great photographs.