If you're stuck indoors or weather bound and have already polished your Xmas book off, have a read of the nine climber/climbing blogs which have been nominated for the 2014 Trespass Blog Award. 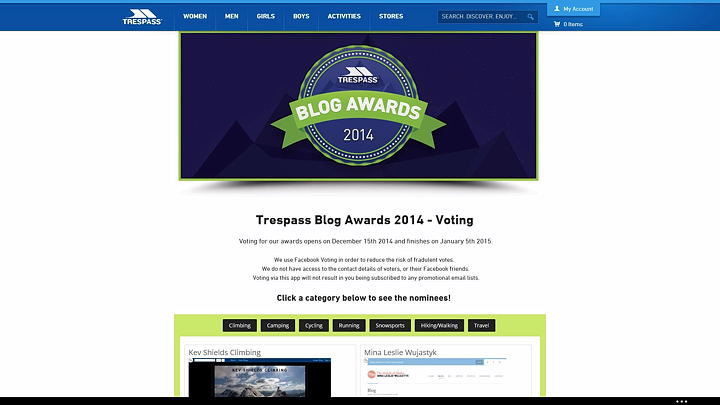 Voting in the Trespass Blog Award opened back on December 15th and will stay open until January 5th with the winners being announced on January 7th.

Now’s a good time to check-out the nominated blogs and cast your vote. The Blog Award actually covers a whole raft of sports and disciplines – there’s a total of seven categories in fact, Climbing and six others  – so there’s plenty of good on-line reading for you.

There are nine blogs nominated in the Climbing section ranging from hard core rock action to the full-on winter stuff. Here’s a list of and links to the nominated blogs...

Trespass have added a note or two about the actual voting process which we’re reproduced below so you can check it out if you’re at all concerned about being spammed afterwards.

We use Facebook Voting in order to reduce the risk of fradulent votes.
We do not have access to the contact details of voters, or their Facebook friends.
Voting via this app will not result in you being subscribed to any promotional email lists.