Indian authorities announced yesterday that five bodies had been located during the search operation for eight missing climbers in the Nanda Devi region. 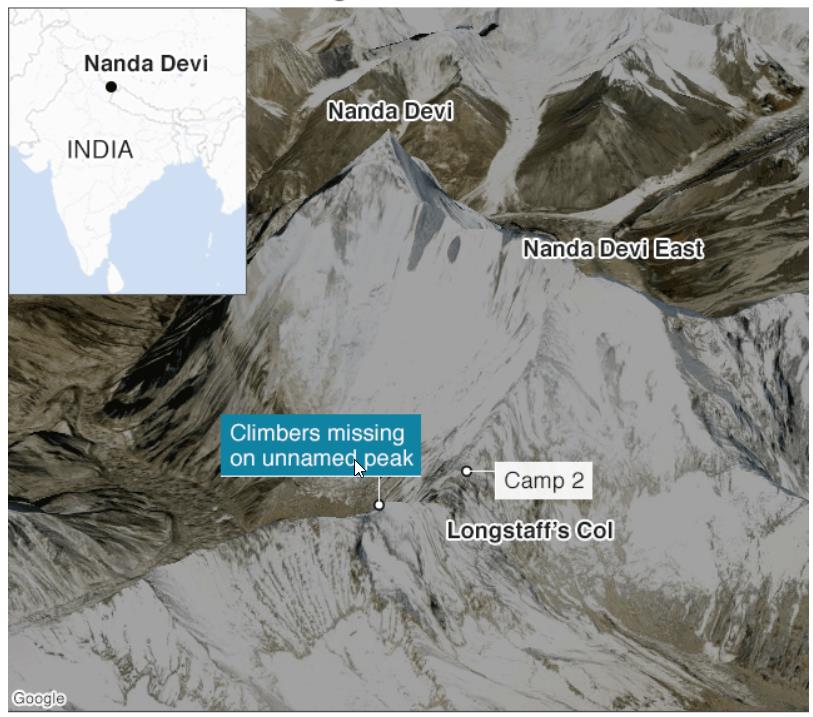 Yesterday, the Hindusta Times released an update: ‘On Monday morning, the IAF chopper left for a sortie from Pithoragarh at 8.51 am for the group’s last location of Nanda Devi East. During the sortie which lasted for about two hours, it detected five bodies at a height of about 5000m,” said Vijay Kumar Jogdande, district magistrate, Pithoragarh.’

Jogdanda, a civil administrator in Pithoragarh district in northern India's Uttarakhand state, confirmed that the helicopter search by the Indian Army Force was then suspended due to heavy snowfall and high winds but that the search for the three remaining missing climbers would resume today and that the IAF was being consulted on how the retrieve the bodies.

The eight climbers are understood to be part of a group of 12 climbers that were on an expedition to the region by Moran Mountain, a Scotland-based climbing company run by the highly respected international guide, Martin Moran.

The British Mountain Guides association, of which Martin Moran was a member, released a statement on Sunday night. They describe that a second group of four climbers, lead by guide Mark Thomas, had been preparing the route on Nanda Devi East and had reached Camp 2. The remainder of the group, including the expedition leader Martin Moran, were attempting an unclimbed peak (Peak 6447m) adjacent to their base camp as an acclimatisation climb.

On May 25th Moran had confirmed that the group had established a camp at c.5400m, that all was well, the weather was good and the group were planning to summit the next day.

It appears that what then followed is uncertain but the BMG report goes on to outline what they believed to have happened. Moran and the other seven climbers on Peak 6447 failed to return to camp on the expected date. Base camp support staff radioed Mark Thomas who, together with his accompanying three climbers, went to Peak 6447 and initiated a search of that area. They failed to locate the missing eight climbers but did find evidence of a very large avalanche on the route that Moran and his group were expected to follow. Thomas instructed base camp support staff to alert the rescue authorities.

The BMG report goes on to outline the search efforts which continued on May 31st and then June 1st. As often the case, the search was hampered by back weather in the area. On June 2nd, better weather allowed a helicopter search of the area; Mark Thomas assisted with that effort. No sign of the missing climbers or equipment were found. Mark Thomas and the three other climbers were flown out from base camp back to Pithoragarh.

Following yesterday’s search efforts and announcements (above) no further update has been issued as yet and it is unknown whether search operations have been able to be continued today or not.

Wide-spread condolences have been expressed to the families of all the missing climbers and the CLIMBER team also adds their sincere condolences to all concerned.