Leaving the UK in January for the first leg of a world bloc tour Tom Peckitt washed-up in Squamish recently where he’s been on a sending spree. 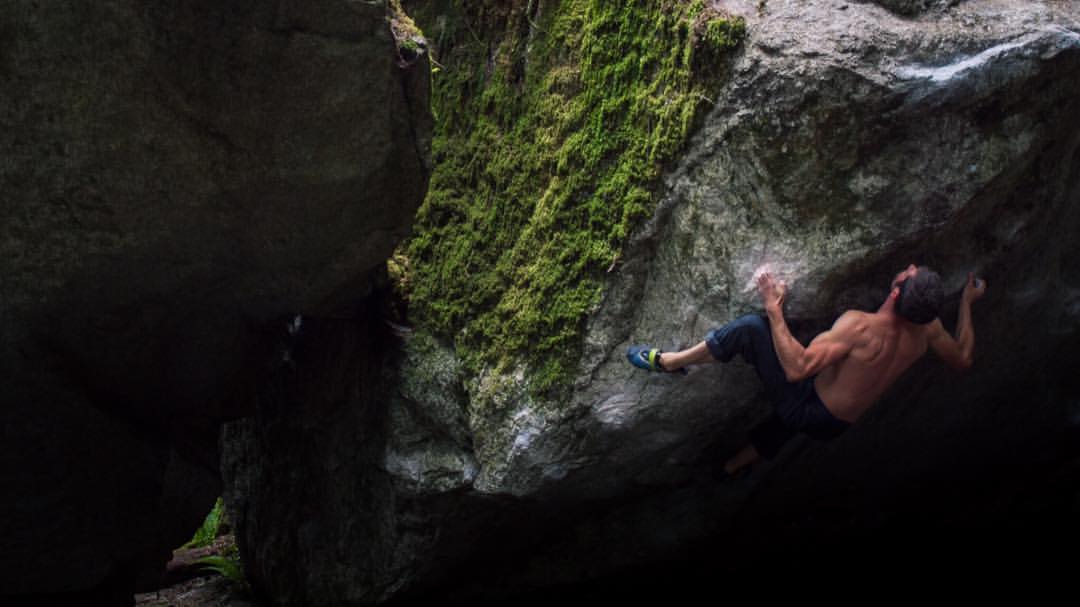 Posting on social media a couple of days back Tom sounded justifiable chuffed have completed all the V11 in the third edition of the local guide; “This place hasn't disappointed!”

You seem to have settled into Squamish nicely - no problems with the granite?

Not sure what’s happened but I seem to have hit the ground running here and going pretty well from day one. In fact, the first week here was one of the best of my trip so far in terms of ticking lots of problems. I’ve not been projecting harder problems too much as there are so many quality problems it seems a shame to sit under one boulder for a long time. My strategy has been to try and do lots of stuff quickly then move on.

Squamish is also a story of conditions. I’ve been lucky to have only a handful of rainy days in the past few weeks and some relatively cool temperatures. Conditions on the rock here can literally change from one minute to the next, where something can feel impossible to doable by a slight breeze. I think to climb the really hard stuff here though it’s felt a bit warm to get decent friction on really poor holds but maybe I’m just making excuses.

I’ve been on a road trip in North America since January so I’ve had time to focus on climbing and try lots of different styles. However, there are striking similarities between the granite here and the UK grit which I cut my teeth on. Parallels can be drawn between the subtle techy style, condition dependant rock and intricate ways to grip holds.

How does Squamish compare to the other areas you've been to on your big tour?

I spent a lot of time in the desert areas in the US, which was great as you can pretty much guarantee that it’s not going to rain. I loved those areas (such as Bishop, Hueco, Joe’s) but I was so relieved to go back to the forest, mountains and moss covered granite. I’d been to Leavenworth before here, which is also granite but a very different style. It’s difficult to say if here is my favourite place so far, but it’s certainly up there!

Tim Clifford moved out there yonks back to climb etc. - you bumped into him at all or done any of his problems?

From what I understand from second hand sources, he’s recovering from surgery on his bicep. I never really met him in the UK as he moved to Canada as I was starting to climb on the Yorkshire grit. It’s inspirational what an impact he’s had on the scene here though. So many of the hard plumb lines are attributed to him. I’ve certainly done quite a few classics with his name on them but not really stepped up to properly try his ultimate test pieces, such as The Singularity (still unrepeated). That will certainly need dry, cool temps and of course fingers stronger that steel! I’ve briefly tried a classic V13 of his called Shelter, which I made good progress on my first session but, again, patience will probably be needed to capitalise when the stars align and the conditions are right.

Where's next on the tour?

Home. I leave Squamish in early/mid- June and return home for a couple of weeks. The plan is to totally rest, as my body is starting to develop lots of aches and pains, see family and friends.

On the upside, I then have a month in Rockands, South Africa! Certainly not regretting quitting the day job!

For connoisseurs of tick lists (hands up if you aren’t?) here’s Tom’s tick list of the V11s. BTW, one of Tom's followers pointed out that there were a few bloc sans ticks - Tom's promised to address that too before he moves on from Squamish.

Tom’s been posting videos has he’s been travelling round the US. Go to his YouTube channel here to watch them. See below though to watch his tape of Squamish V11s.