Toby Roberts – aged 11 years - has just repointed Revelations at Raven Tor to become the youngest ever Brit to climb F8b. 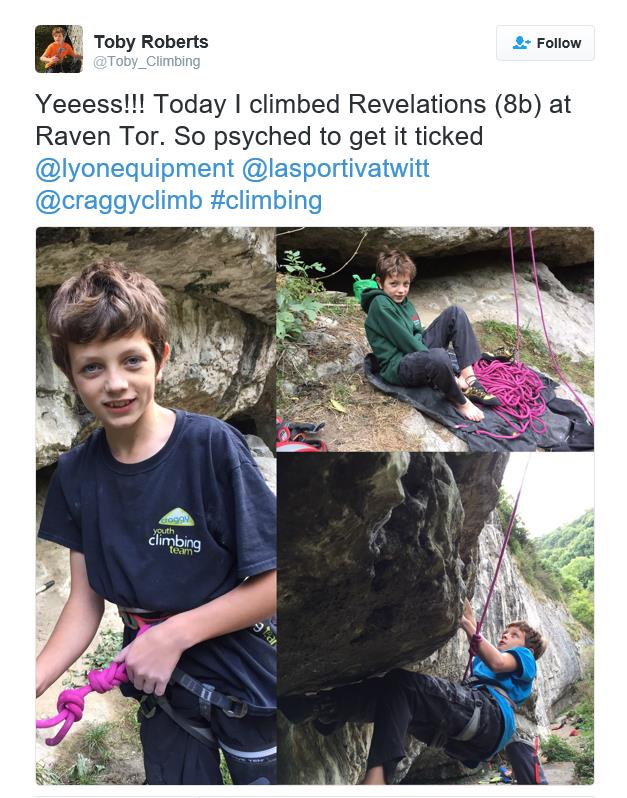 Toby’s rise as the UK’s hottest ‘young gun’ appears to be unstoppable. A year ago Toby – then aged 10 - became the youngest climber to redpoint F8a when he sent Raindogs. Over the intervening year Toby, who climbs at Craggy Island in Gilford, has tightened his grip on the international stage by winning the Imst Youth Colour International Comp in Austria. This international comp is specifically for young climbers who are not yet old enough to compete on the European Youth circuit. His first place this year builds on his excellent second place last year – reinforcing the view that Toby is one of the most dedicated and able young climbers about. Becoming the first ever British winner at Imst is undoubtedly another string to Toby’s bow – to mix sporting metaphors! Toby’s ascent of Revelations makes his the youngest to climb F8b – so we believe.

Always keen for a quote or comment from someone in the know, CLIMBER have been in touch with Ian Dunn – the junior team coach. Ian, who fondly remembers doing both the Raindogs - Revelations double back in the day, is especially well-placed to comment therefore. “Toby is so small his ascent of Revelations is an incredible effort”. Word was that Toby’s sequence was ‘pretty wacky given he’s so short’ so what did Ian make of that? “Toby’s so focused and driven that he’s find a way round things that seem impossible”. CLIMBER also asked Ian what he thought of working with Toby as the team coach; “He really competitive, very, very keen and works very hard”.

So Toby’s climbing future looks very bright indeed – CLIMBER look forward to reporting on his continued rise in the sport. Meanwhile follow Toby on Twitter or via his website here…