Tim Miller, a fully qualified Mountaineering and Climbing Instructor, has just been awarded The Scottish Youth Award for Excellence in Mountain Culture. 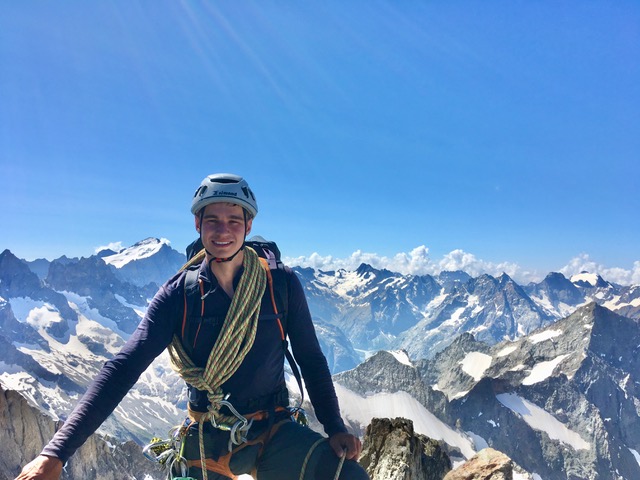 In a joint announcement, the West Highland College UHI and the Fort William Mountain Festival have announced that 23 year old Tim Miller, a volunteer climbing coach at The Glasgow Academy and a graduate of Earth Science (BSc) from The University of Glasgow, as well as a fully qualified Mountaineering and Climbing Instructor is the sixth recipient of The Scottish Youth Award for Excellence in Mountain Culture.

The award, established in 2015, celebrates adventurous young people, the landscapes they choose to explore and the outdoor pursuits in which they excel. The young recipient needs to have shown resilience and determination to succeed within their chosen area of expertise, shown results through their own efforts and ideas, given back to their community, whilst being thought of as an example of excellence by others.

Tim said: “I am really delighted and humbled to be receiving the Youth Mountain Culture Award this year. It has come as a big surprise and it was a lovely gesture by Rob MacKenzie [2017 youth winner] to nominate me.  Well done also to Colin Prior on his Scottish Award for Excellence in Mountain Culture.”

From the very first days being coached at the Glasgow Climbing Centre, Tim was instantly hooked, quickly becoming a passionate, strong and competent climber and making a name for himself on the competition scene in the city. In 2013, in his first foray into competitive dry tooling, he won the Junior Scottish Tooling Series.  With very limited ice climbing experience, he placed 4th in the Youth Ice Climbing World Championships in Champany en Vanoise, France, the following year.

However, when Tim made the transition into outdoor climbing he found his true calling. In a climbing career, spanning less than a decade, he has had many epic alpine and mountaineering adventures; numerous hard traditional and winter ascents and demanding test pieces and first ascents, including grade VIII winter ascents.  He has also undertaken many technical expeditions to the Greater Ranges [the high mountain ranges of Asia] where he has climbed up to 7000m on new routes and unclimbed peaks.

Tim has not only dedicated time to honing his own skills. From the age of 17, he has dedicated a great deal of time to passing his knowledge on to the next generation of climbers. Tim went to school at The Glasgow Academy, which has a leading outdoor education programme. Upon his graduation Tim began giving back to the programmme, volunteering his own time to work with the young climbers coming through the school. His calm, friendly, polite and deeply knowledgeable personality makes him an excellent instructor, always leaving the kids excited for more climbing.

Through working with the school and getting a taste for teaching and instructing Tim Miller has focused his efforts into learning and gaining the experience he needs to make a life out of guiding and climbing instruction.  He has recently passed The Mountaineering and Climbing Instructor Scheme qualification awarded by the Mountain Training UK - the collection of awarding bodies for skills courses and qualifications in walking, climbing and mountaineering in the UK and Ireland. He is now working towards becoming one of the youngest people ever to be accepted on the British Mountain Guides training scheme. Tim is a member of the Association of Mountaineering Instructors.

Tim now runs a successful guiding and instructing business, Miller Mountain Guides, taking his passion for both teaching and climbing into the mountains.

Rod Pashley, Chairman of The Highland Mountain Culture Association, organisers of the Fort William Mountain Festival, said: “What is striking about Tim Miller is his countless achievements on such a rapid journey; his development and honing of technical mountaineering skills and abilities and his mountaineering experiences that have taken him to the Greater Ranges. What is also striking, and one that would no doubt be expected from a professional mountaineer, is his passion and love of the outdoor environment; the sharing of it; the engagement with others and the understanding of the power of mountain culture and the benefits of engaging with it at whatever level”.

Lydia Rohmer, Principal and Chief Executive, West Highland College UHI, said: “West Highland College UHI is privileged to sponsor The Scottish Youth Award for Excellence in Mountain Culture in this, our tenth anniversary year as an academic partner of the University of the Highlands Islands. We are delighted that this year’s recipient clearly epitomises the resilience, entrepreneurial excellence and commitment to the outdoor community that we strive to develop in our own students at the School of Adventure Studies here in Fort William. We wish Tim every success in the future.”