The year after sending Rainshadow (F9a), Stu Littlefair – the UK’s favourite climbing astrophysicist and arch rival of kneebar-king Alex Barrows - has just celebrating his 40th birthday by doing 40 routes at Malham and Kilnsey. 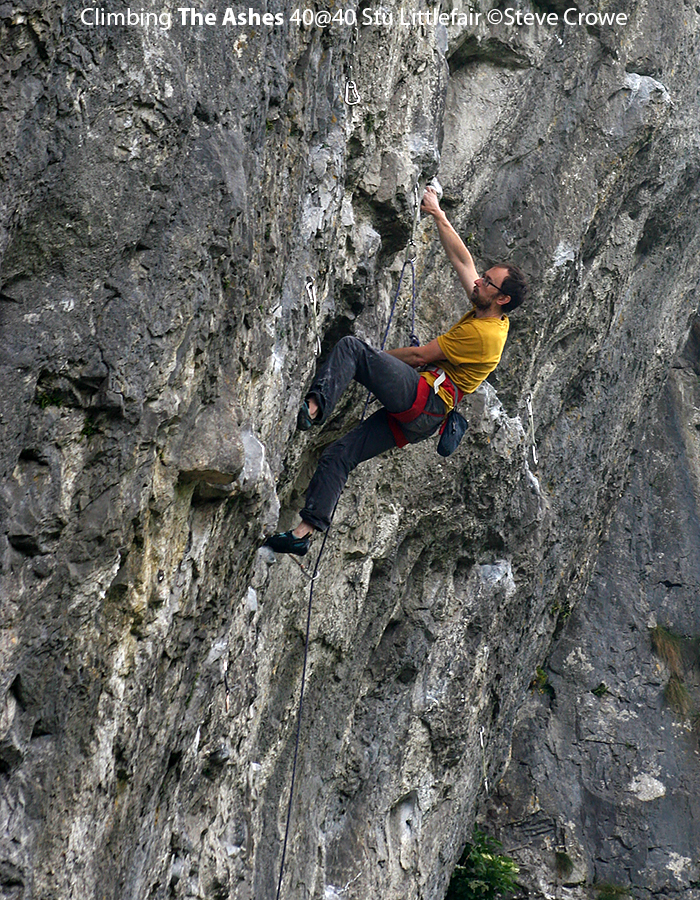 Enchainment projects have become much in vogue recently; Ron Fawcett’s original 100 routes in a day on grit yonks ago setting the early pace. Since then, link-ups like the Staffordshire Nose – where all the Joe Brown and Don Whillans routes in Staffordshire are done in a day - have become popular challenges. Others have taken it to extreme’s – quite literally. 2014 saw James ‘Caff’ McHaffie solo 100 Lakes Extremes in a day and Pete Whittaker doing likewise for 150 extremes in a day on Peak grit. Perhaps the toughest yet was the Pete Whittaker and Tom Randall monster Derbyshire/Staffordshire challenge when they did 125 routes and 22 miles of running in a 24 hour period.

So, back to Stuart’s 40@40 which unusually, he did on limestone.  Stuart has been a regular at both Malham and Kilnsey for some time now where he has steadily worked his way up through the harder grades but his ‘enchainment’ project is quite different. Much to his credit, Stuart didn’t stick to easy routes either – Raindogs (F8a) for example was on his list although having redpointed Rainshadow last year then it’s reasonable to believe that he had Raindogs ‘off pat’.

For the record he’s the list of route he did starting first with Malham and then moving over to Kilnsey.

CLIMBER have been in touch with Stuart with a few questions:

I was inspired to do the 40@40 by the summer challenges Tom Randall & Pete Whittaker do. I fancied something similar. I also knew there was a fine tradition of climbing your age in routes but usually on quite easy routes, and usually by people in their twenties, so I thought it was about time someone did it properly.

Did you climb the routes as they appear in the list in left-to-right order and if so, is there a subliminal message for peeps to get their head's around?

The list is in R-L order so I wouldn't forget where the routes were once my brain stopped working. I actually climbed the routes in a highly scientific order designed to maximise the chances of success. Or I picked the one I fancied climbing next, I forget which.

Alex Barrows wants to know how many kneebars you used?

Good question about the kneebars. I was very worried about the historical significance of this important day out and so I eschewed all kneebars and, in many cases all technique whatsoever. That way there can be no questions asked.

When are you gonna stop messing about and get on an F9a+?

I'll get on a 9a+ soon, I promise. But first I just need to sleep for a few days.

Thanks to Stu for sharing his thoughts and to Iain Macdonald and Steve Crowe for the pixs. See more of Iain’s pixs online here  and Steve’s photos online here…

Update: Stu also thanked his supports including his belayers, and route equipers who climbed the routes twice - once to put the gear in and then to remove it afterwards; "Massive thanks to everyone who helped on the day! Special thanks to Karin Magog and Steve Crowe who equipped half of Kilnsey. Rob Sutton and Jules Littlefair and Matt Pascoe for all day belaying skills and to my family for hanging out all day and winding me up. Last but not least: thanks Paul Bennett for the Haribo!" Stu.