Stoney Middleton in the Seventies

A history of climbing at Stoney Middleton throughout the Seventies is now on-line.

Aficionados that revel in climbing history should make themselves a coffee and then hot-foot it over to the Stoney Middleton Heritage website straight away for the captivating inside story of climbing at Stoney during the Seventies as told by one of the central climbing figures, Geoff Birtles. 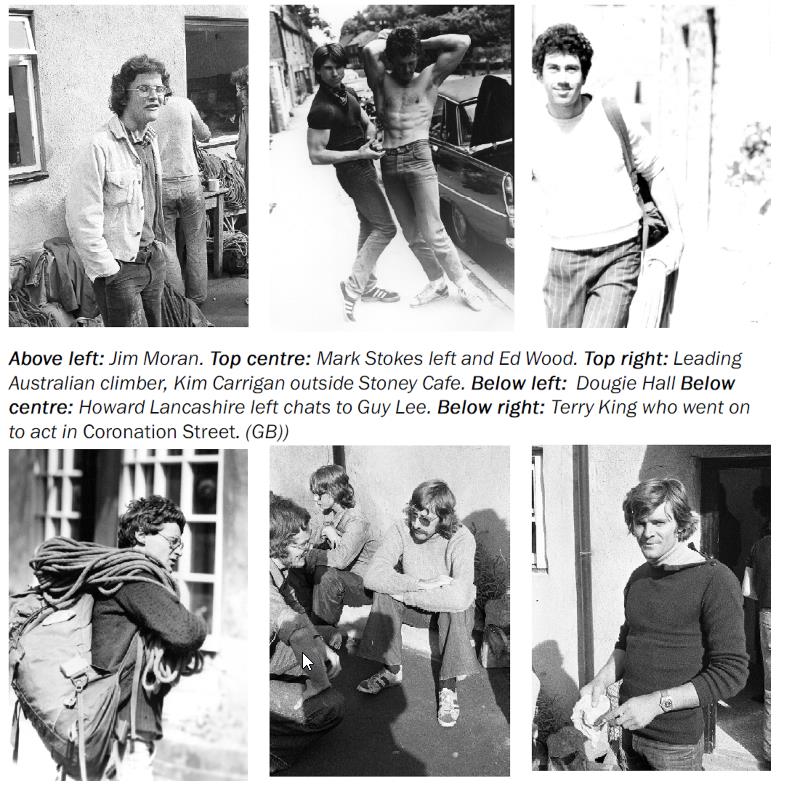 Stoney devotees from the Seventies

Birtles, no stranger to hard first ascents himself, frequently partnered the mighty Tom Proctor on numerous outings and cutting edge new routes. Fuelled purely by builder’s tea and chippy butties from the legendary Stoney café Proctor and Birtles frequently vied for new routes with Yorkshire raiders Pete Livesey and Ron Fawcett to say nothing of the then young whipper snappers like Gabe Regan, Ed Wood as well the marauding Dougie Hall. Crags Magazine, published by Birtles, frequently reported the news in what now seems like a prehistoric (pre-internet…) era!

Arguably Tom Proctor – a.k.a. Hydraulic Man – was the man; certainly he made Stoney his own. Our Father (E4 6b), was Proctor’s 1968 calling card. Circe (E5 6b) and Kink (E5 6c), both done by Proctor in 1977 provided considerable entertainment for the locals.

Tom also developed the bouldering in Tom’s Roof (a.k.a. The Womb) – not to be confused with Tom’s Cave which is further up the Dale – in which he developed some great problems as well as his great strength. Famously, Proctor glued a crucial hold back on a central problem for the continued delight of all that followed in his footsteps; one of the first occasions known occasions that glue was used to restore a problem/route.  Four Minute Tiler (E5 6b), Proctor’s last great addition – having failed to put the first free ascent of Menapause to bed - signalled an end to the era.

Starting with Four Minute Tiler the Eighties at Stoney saw massive development - this will be written and added on-line to the Stoney Heritage website.

Click through here to read the full account of climbing in the Seventies at Stoney by Geoff Birtles.