Steve Dunning is The New Statesman

Inspired by the quality of the climbing and the vison of the first ascensionist, Steve Dunning has just headpointed The New Statesman (E9) at Ilkley.

With Yorkshire Gritstone in the news recently following the new guide by the YMC (Yorkshire Mountaineering Club) it seem poetic that Dunning should be one of the first out of the blocks for the 2014/15 winter grit season with his ascent of John Dunne’s Ilkley masterpiece, The New Statesman. Dunne originally did The New Statesman back in 1987 when he graded it E8 7a. At the time it was considered the hardest route on grit and it only succumbed to Dunne after considerable effort and top-rope practice. 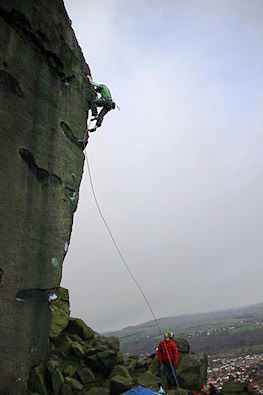 Steve Dunning on his ascent of The New Statesman. Photo Tom Lewton

Fast forward nearly thirty years, Steve Dunning ascent of The New Statesman is thought to be the tenth ascent. Although Steve Dunning is no stranger to hard climbing, he isn’t big into headpointing. “It’s only my third ever headpoint” Dunning admitted. That being the case we asked Steve what motivated him then to get involved with the route and apparently it was all down to Team USA. “I was at Ilkley when Team USA (Matt Segal, Alex Honnold and Kevin Jorgeson) rolled into town. And when they said The New Statesman was absolutely stunning I’ve wanted to do it ever since”.

For years, the word on the street has been that an upgrade has been in the offing – especially after Michele Caminati fell off high on the arête and ripped one of the cams that was thought to protect that section. Since then, the placement has been considered to be very poor. Dunning confirmed, “I put the cam in but the placement is now so poor that the weight of the rope alone pulled it out. Fortunately, it was when I was working the route and not on the actual headpoint itself!" Team USA were believed to subscribe to the E9 grade as well.

Dunning had this to say about the grade. “I’ve onsighted E7 on grit easily by comparison so I’d say that The New Statesmen is more than 1 grade harder so E9 seems about right. It’s a highball Font 7c+ that you wouldn’t wanna jump off into a tricky E6. It was probably one of the hardest problems around in 1987”. More importantly though Dunning confirmed that the climbing was excellent and that Dunne’s ascent in 1987 was “visionary”.

When he’s not out climbing Steve Dunning runs the Depot climbing walls in Leeds and Nottingham. Click through here for more info.

Thanks to Tom Lewton for the image of Steve Dunning on his ascent.