The shock waves continued at the Briancon Lead WC last weekend with some top names absent, some delivering so-so performances and others posted faultless performances.

A number of top name climbers, Adam Ondra, Shauna Coxsey and Jessie Philz included, were all making their final preparations for the forthcoming World Championships and hence absent from Briancon. In contrast, Briancon was business as usual for many, although that said Janja Garnbret faced a different pressure at Briancon – namely could she get back to her normal winning ways?!

The semi’s once again provided some big shocks not least in the men’s where Sean Bailey finished in joint first place with Hiroto Shimizu. Amazingly, numerous big-names didn’t bring their best game; Romain Degranges, Sasha Lehmann, Stefano Ghisolfi and Alex Mego all finished much lower in the rankings than would be expected. Will Bosi on the other hand, stormed through in third place just one move behind the joint leaders. Over in the women’s semi, Chamonix winner and shock new lead star Chaehyun Seo finished in joint first place with Natsuki Tanii; Janja Garnbret being edged into third. Molly Thompson-Smith put in another excellent performance but missed the final finishing in 16th.

The action in the men’s final all centred on moves 34 to 39 high on the route. Having placed fourth at Chamonix Will Bosi was clearly out to show that he could go all the way at Briancon but when he fell off a foot-swop on move 38 he looked as though he had a fair bit left in his tank. If Bosi continues to post such performances it can only be a matter of time before he podiums and it’s not beyond the realms of possibility that he could well notch up a win in the process! As it was, it was Team Japan – remarkably - that took all three podium positions with Hidemasa Nishida taking the win, the first of his career.

Over in the women’s event all eyes were on Janja Garnbret to see what she could deliver. To the obvious delight of the crowd Garnbret delivered a solid performance completing the all-out jump to the final bucket to take a top. That said, she looked so pumped that she struggled to actually clip the chains so her ‘top’ hung in the air for a few moments until after what seems like an age she finally clipped the lower off! Climbing next, Natsuki Tanii looked in control all the way to the final jump which she promptly failed to make any impression upon. Not so Chaehyum Seo however; she absolutely creamed the route, nailed the final jump and clipped in a manner that totally belies an athlete in their first ever lead WC season. Her win at Briancon, means she has two golds and a silver from her third performances thus far this season. Garnbret undoubtedly has competition for the 2019 lead title; it remains to be seen how the final three lead comps after the World Championships will go; place your bets folks!! 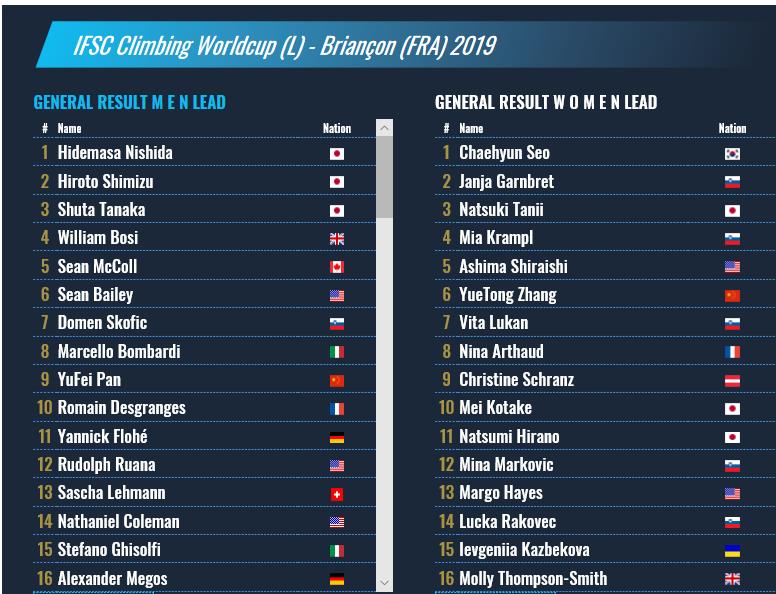 The athletes are now on a three week break from competition before they go head-to-head in the Hachioji World Championship between August 11th and 21st.

Watch the Briancon finals below…

Watch the Briancon Parclimbing finals below…