In a dazzling display of power and purpose both Shauna Coxsey and Jongwon Chon took back-to-back golds in Navi Mumbai over the weekend. Shauna Coxsey’s eleventh career gold gave her an unassailable lead and hence the 2017 IFSC World Cup Bouldering title - her second in as many years.  Jongwon Chon will have wait until Munich to see whether he takes the men’s title. 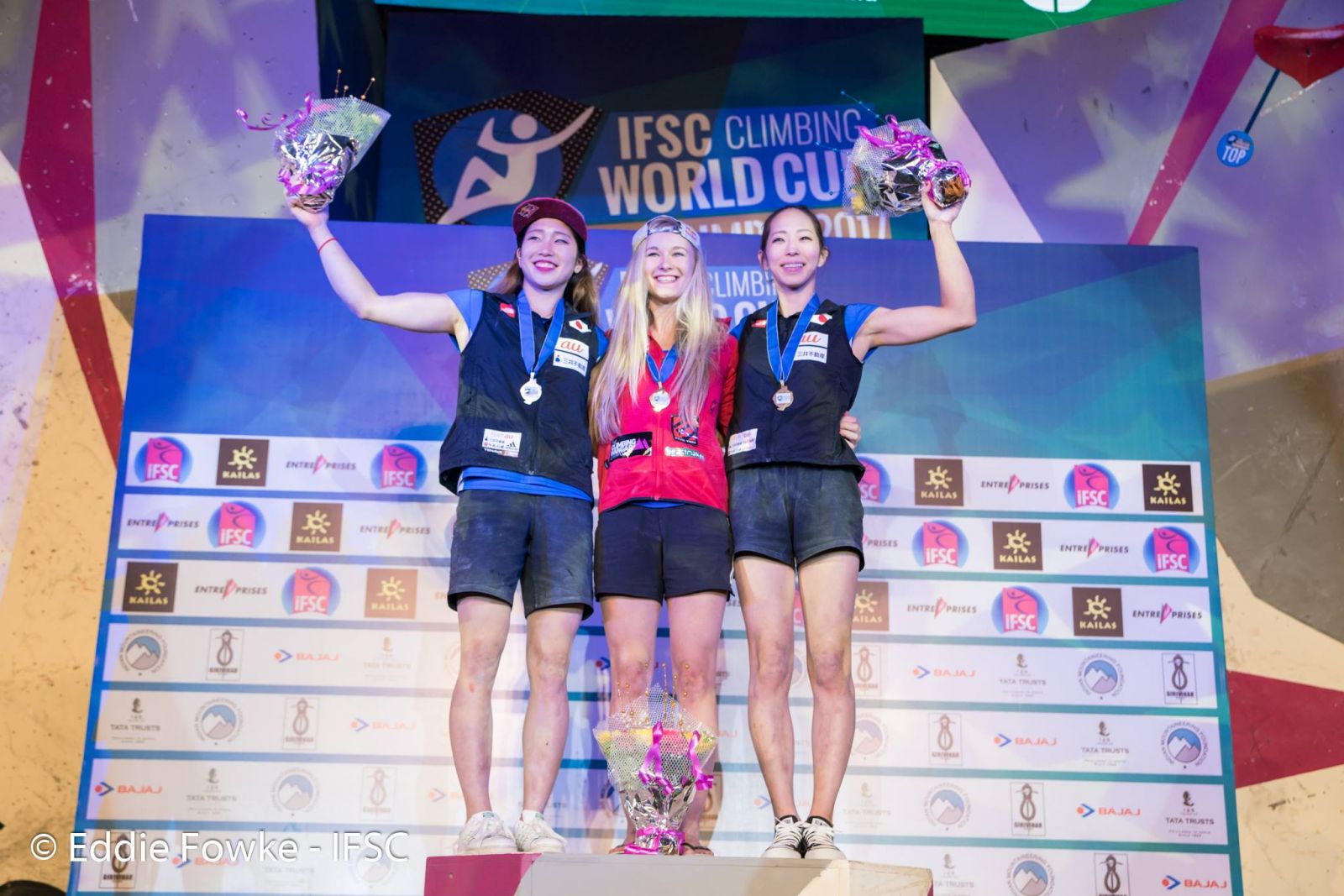 The setting and crowd inside the arena in Mumbai responded well to the boulderers – as well they might given the strong field going into the finals. All six of the men’s finalists, for example, had all won WC in the past. Considerable use was once again made of super large volumes – along with dual texture holds. Whilst many of the problems featured dynamic moves the run-and-jump style blocs wasn’t prevalent. Unlike the previous comp in Vail where a high number of problems were on slabs, Mumbai was all about steep angles. 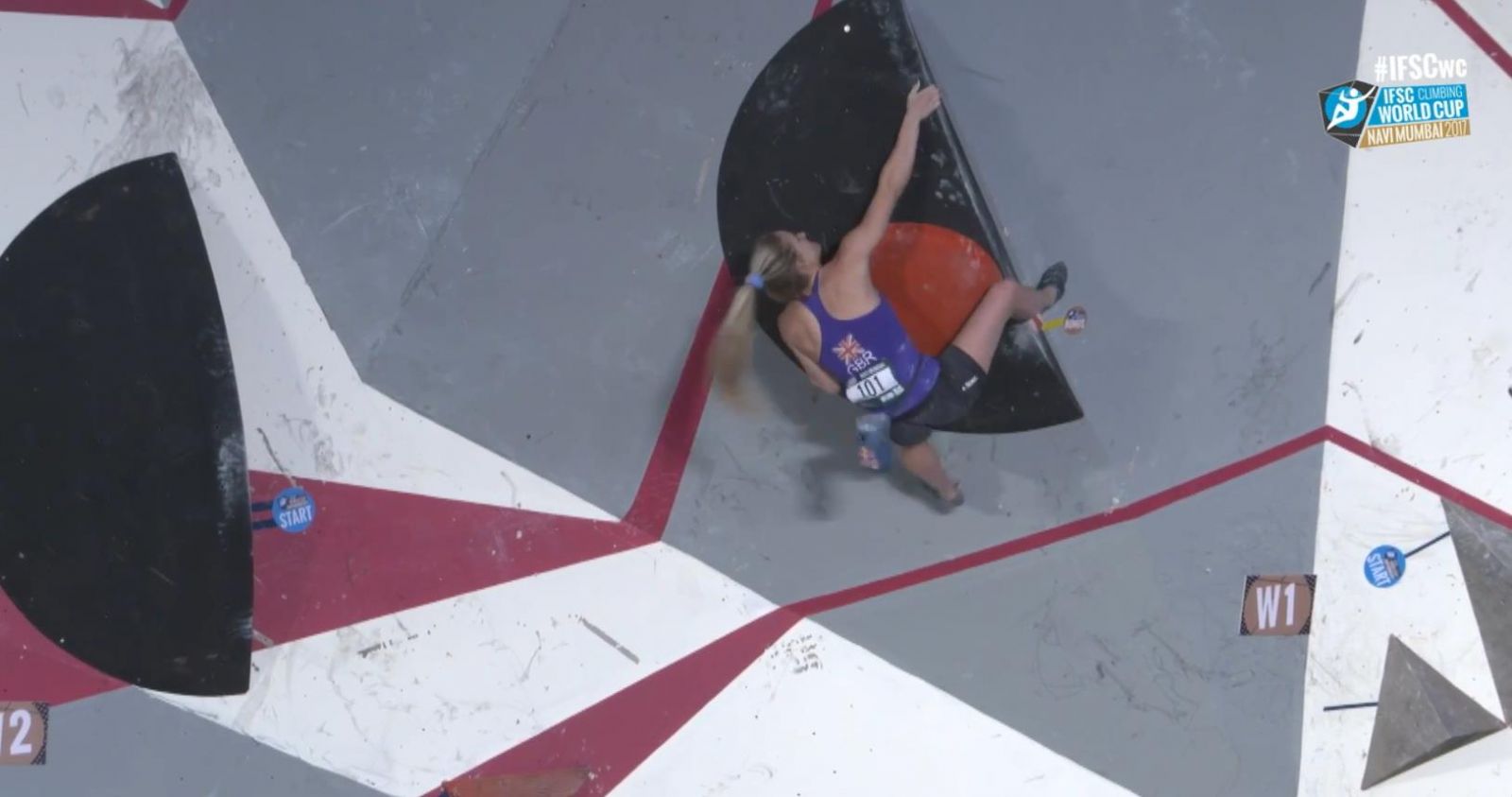 Shauna Coxsey was dominant from the get-go finishing first in both the qualification and semi-final rounds. Cometh the final, Shauna looked as cool as the proverbial cucumber during the viewing period; her inner calm was almost surreal – it seemed as though she knew exactly how she would climb each of the blocs almost without a second glance. Shauna duly completed all four final blocs – the only athlete to do so – in a total of 11 attempts. W2, which involved a sideways dyno for a hidden hold, took Shauna and Miho Nonaka five goes apiece; the rest of the field falling repeatedly off the move. It was however the final bloc, W4, that really set Shauna apart from the field. Not only was it the last bloc, it was also the hardest and once again it involved a dyno – this time from a contorted position whilst going for a small hold in the dished interior of another volume. To the crowd’s adulation, Shauna held the move and then carefully cruised to the top getting the final hold exactly at the point that the clock counting down her four minutes flipped over onto 0:00! It couldn’t have been scripted better! Shauna’s 11th gold gave her another 100points which puts her in an unassailable position on 535 points and hence the 2017 IFSC World Cup Bouldering title – for the second year running. What makes it even more impressive is that Shauna had major shoulder surgery after winning her first title. In second place was Miho Nonaka with Akiyo Noguchi coming in third.  Leah Crane, Shauna’s long-standing training and completion companion, had her best result coming in 11th whilst Michaela Tracey finished in 13th. Janja Garnbret, once again didn’t compete in Mumbai given she preparing for the World Cup Lead events. 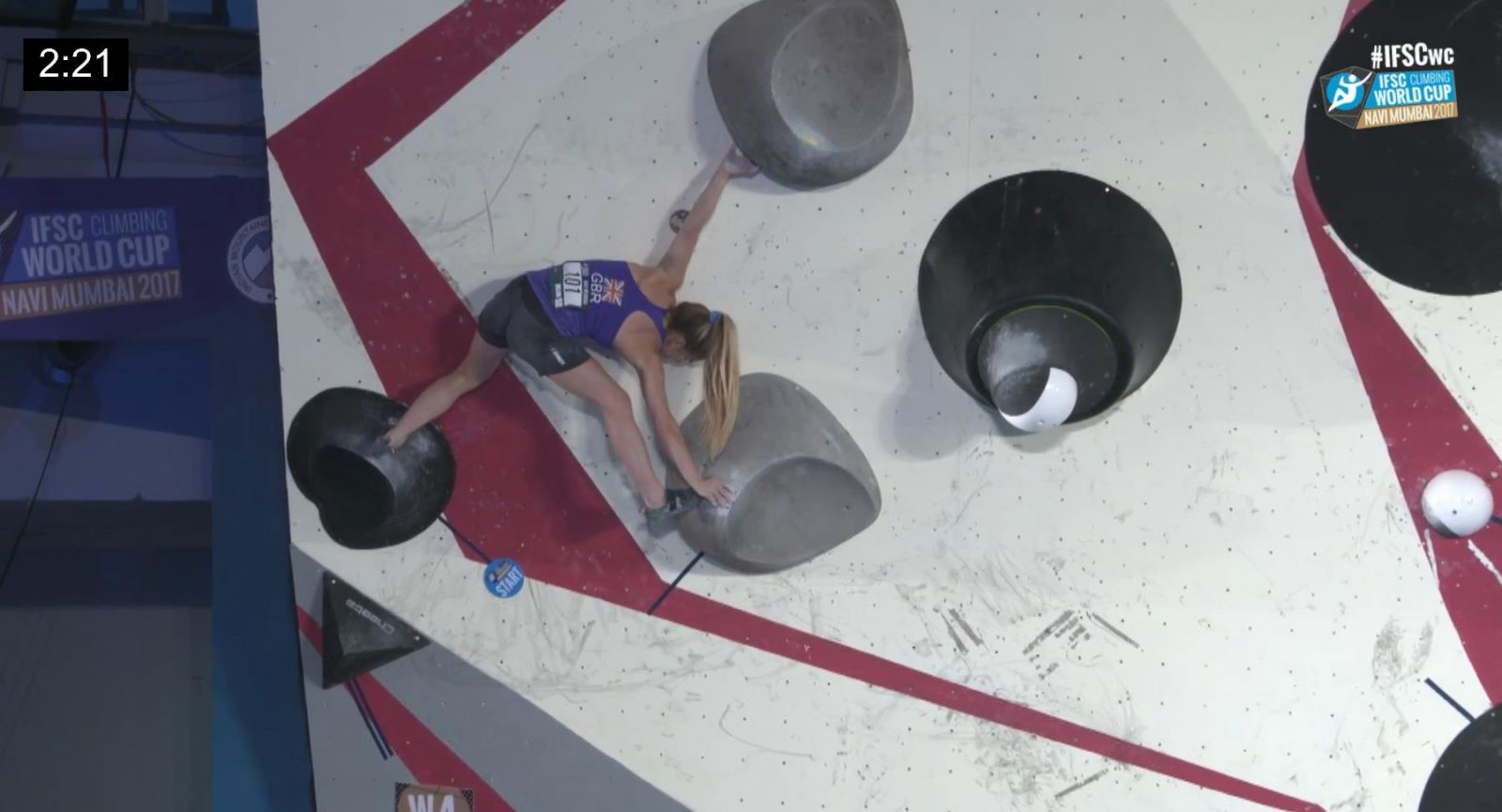 Shauna Coxsey contorting betwixt the volumes on W4 - the crucial crimp buried inside the volume to the right of Shauna's left hand - a hold which she eventually got with her right hand just seconds before being timed-out. IFSC video feed

The men’s event was no less a thrilling comp and as with the women’s event, it wasn’t over until the very final bloc. A high scoring qualification round had been followed with the mother of all semi’s; one of the lowest scoring rounds for a while with even the leaders restrained on two tops. The finals however saw multiple tops; the setters seemingly gifting M1 given the solid (flashed) performance of many of the finalists. That didn’t continue for long however and the field soon spread out. Jongwon Chon held it all together to emerge victorious topping M4 just seconds before his time ran out! Rei Sugimoto and Aleksei Rubstov came in second and third respectively. Billy Ridal posted his best every result (20th) with his first semi’s; David Barrans finished in 37th. 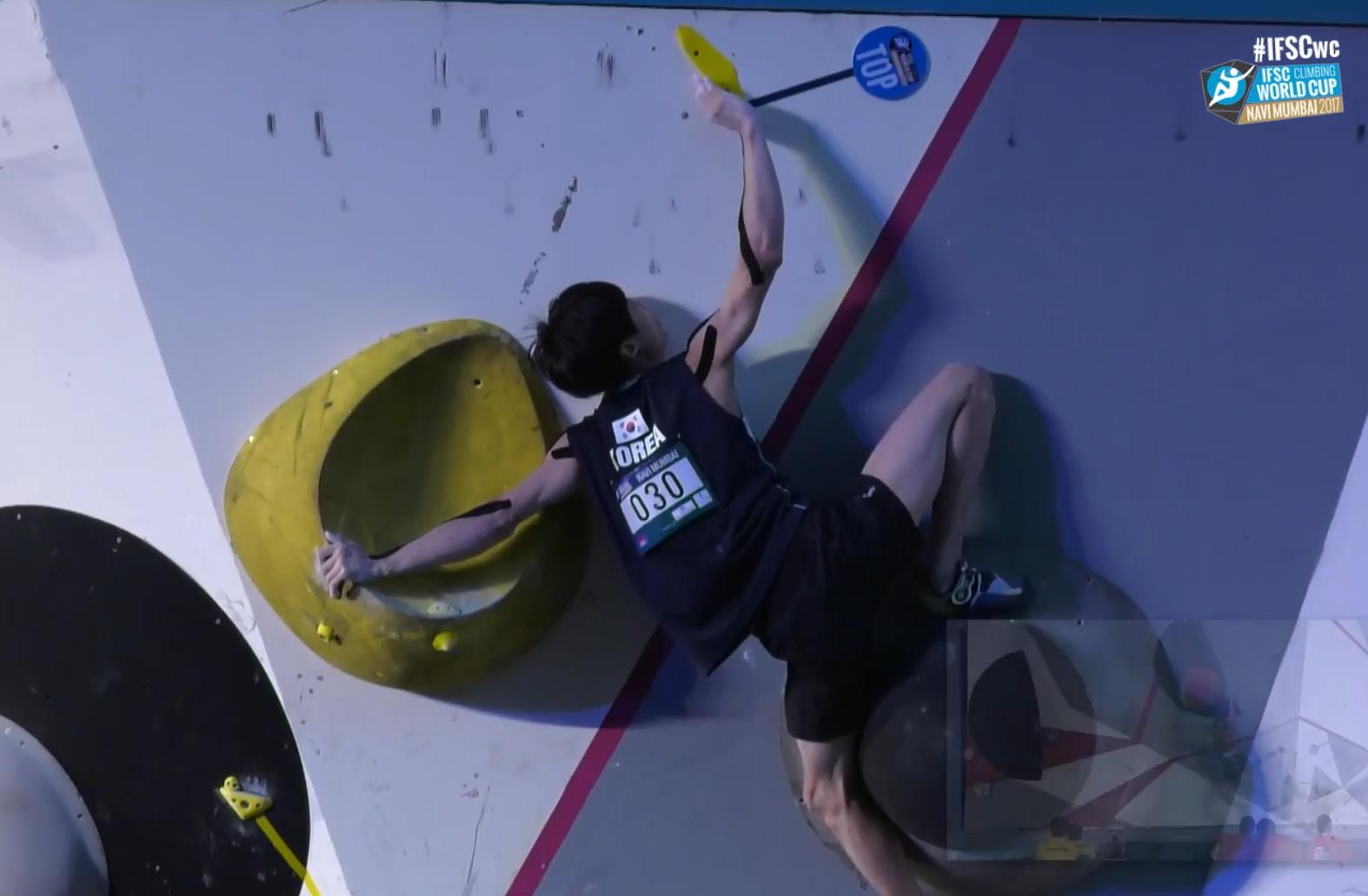 As already stated, Shauna Coxsey is now in an incredible position on 535 pts ahead of Miho Nonaka (377pts), Janja Garnbret (370pts) and Akiyo Nonguchi  (325pts). With Garnbret concentrating on the lead comps it appears as those Miho Nonaka and Akiyo Nonguchi are assure second and third respectively for the 2017 season. Michaela Tracey has 190pts and Leah Crane 57pts. In the men’s event, Jongwon Chon has 426pts ahead of Aleksei Rubstov and Keita Watabe both on 372pts. Tiler Landman is in 22nd place with 62 pts; Nathan Phillips is in 35th on 25pts, Billy Ridal on 46th on 12pts and David Barrans in 52nd on 5pts. 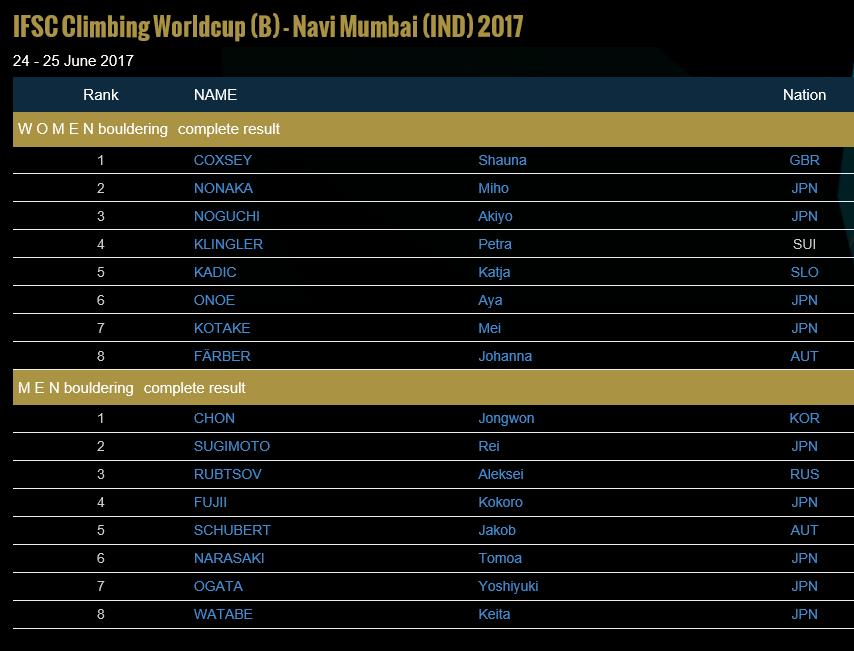 The final event in Munich is on August 18-19th.