Ramon Marin, has climbed “The Prow project” at Masson Lees in the Peak District at M11. 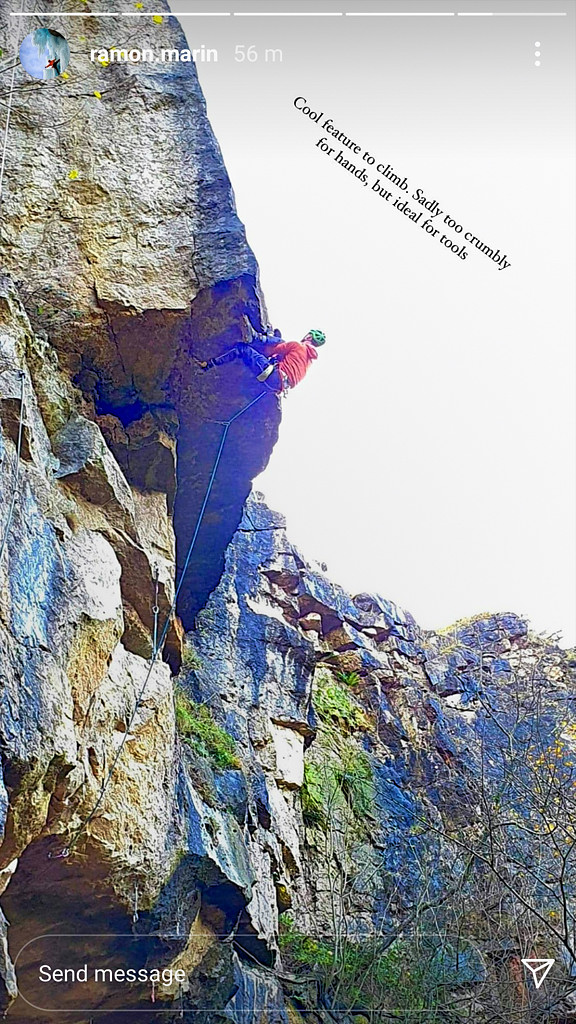 Ramon Marin, ex of Catalonia but now a Peak District local having lived for years in London, has swopped his chalk bag and rock shoes for axes and fruit boots for a productive day in the Peak’s own dry-tooling venue, Masson Lees.

As well as a craving for adventure and rock climbing Ramon has a long-standing interest in winter climbing and dry-tooling; his CV is rammed with both hard winter and mixed routes alike. In 2015 an aborted trip to Helmcken Falls lead to ascents of both Steel Koan (M13+) and Musashi (M12) at the Cineplex Cave in the Canadian Rockies.  Here in the UK, Ramon has climbed a number of hard first ascents of mixed routes at Masson Lees including Substantial Losses (M10), Substantial Gains (M11) and Band of Brothers (M12) before his latest offering, The Prow (M11).

Posting online about his first ascent of The Prow Ramon sounded pretty chuffed; “One of the better routes I’ve done, rock, tooling or winter. It’s got a bit of everything: roof thrutching, a bit of burl and techy, delicate exposed slab. Up there the rock (mud!) is so soft you can actually swing your axes in, tap, tap, tap. Not too dissimilar than the real thing.”

Ramon added; “The Prow is mega, it’s just a shame it can’t be climbed with hands. Would be a similar position to The Spider [Chee Dale]. I’ve always fancied climbing it since I first started coming to Masson; first as rock route, then as a DT route when it became obvious that was going to be impossible to free climb. So it’s cool to have the skill set to climb it; it certainly is a great line.”

Recently Ramon has been climbing at Raven Tor so switching to dry-tooling was something of a relief it seems as he told Climber; “I’ve had three days at the Tor these weeks my fingers are blown. Also, it’s great strength and conditioning – I’m not much of weights/gym guy.” 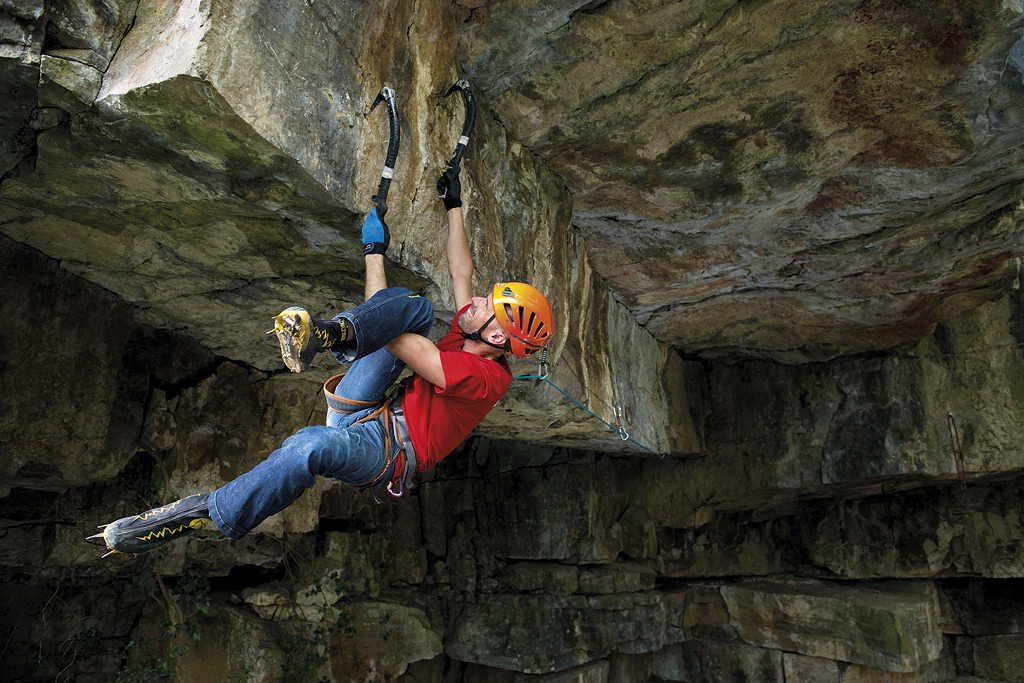 How many DT routes are there at Masson and what’s the grade range?

There are about 14 routes at the moment but that’s changing rapidly as there’s momentum currently with new development. That’s partly due to me moving locally and more people getting involved. The grades range from M5 to M12(++) currently, but there are plans to bolt easier routes due to popular demand. It’s the place of choice for getting ready for Scottish winter at the moment due to its convenient location. It’s very motivating seeing people visit Masson to further their winter skills on the routes we are putting up.


How does The Prow sit relative to other dry tool routes in the UK? Is it one of the harder routes?
It’s not that hard compared to other routes, however grades at Masson are traditionally harder than other crags. What makes the route special is the quality of the line rather than the grade. I originally abseil it with the idea to bolt a rock climb as the prow takes such a prominent stage in the crag, but the rock is too poor, which makes it the ideal candidate for dry tooling.

How long has it been a project and how long did it take you to do The Prow?
I bolted it last year it’s taken me 3 attempts, but I tried all the moves extensively when bolting.

The rock is quite soft at Masson Lees, could the difficulty/ grade change with repeat ascents?
That’s a possibility but there’s a good bunch of crag custodians that look after the routes and if a hold would blow (it happens often) then it would get repaired. However, with drytooling can go either way, some routes get easier with traffic and some get harder. It only gets repaired if it’s unclimbable.

In the past you've had some amazing trips overseas to places like Canada etc - are you hoping for covid restrictions to ease this winter and do u have any trips planned?
Yes, the plan was to go to Canada again but obviously, that won’t happen. But to be honest, recently I’ve been more psyched about doing things in Scotland. Travelling long haul was easier being based in London, but now that I live in the Peak District I’m hoping it’s a bit easier to go north.

Watch a short video about Ramon below…