Nathan Phillips and Melissa Le Neve took the top places in the 2019 CWIF held over the weekend in Sheffield at the Climbing Works. 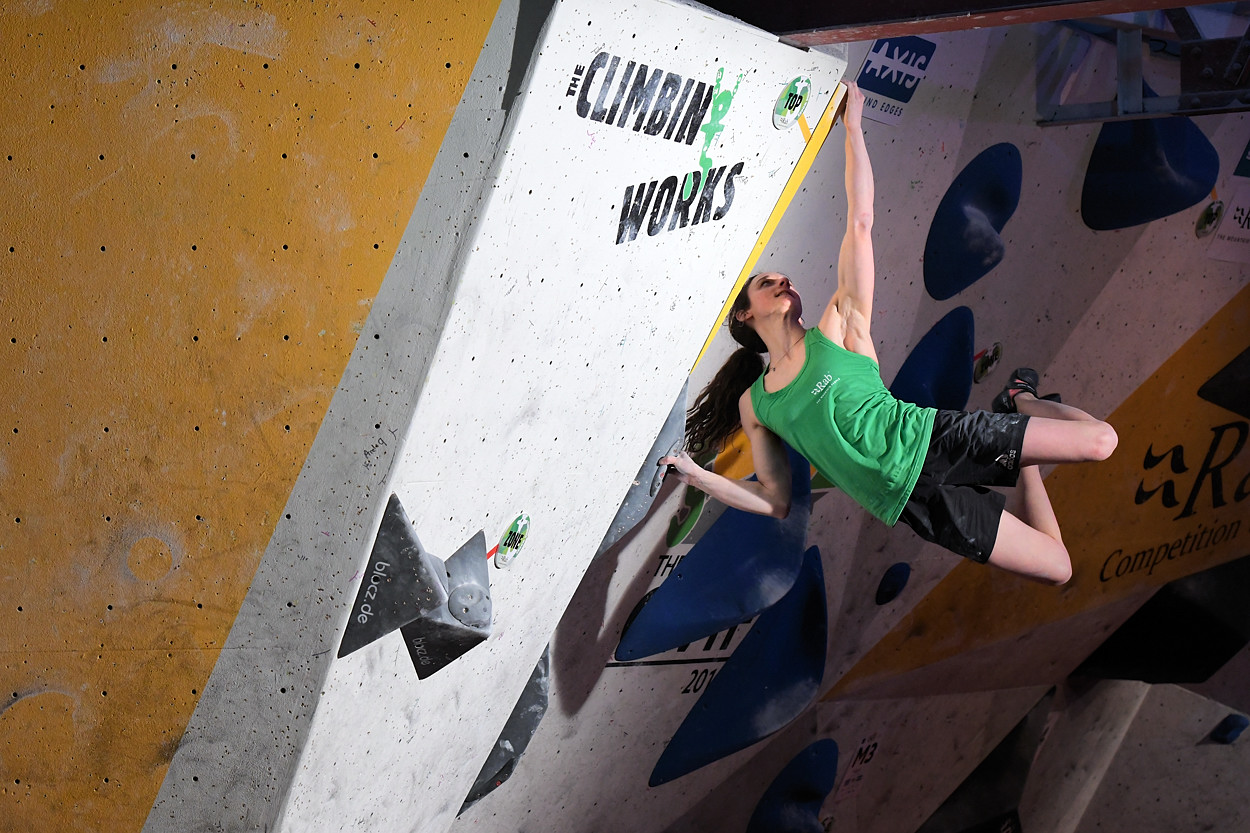 As usual, the Rab CWIF (the Climbing Works International Festival) started the 2019 bouldering comp session off in fine form with plenty of interest from super strong overseas competitors as well as GB climbers. Famous for its friendly nature, the CWIF is an ‘open’ competition meaning that anyone can get involved with the qualification round on the Saturday; albeit they’ll be competing against some of the world’s top boulderers. The twenty best men and twenty best women go forward into Sunday’s semi-final. Typically, as was the case again his year, the semi’s at the CWIF are little short of brutal. 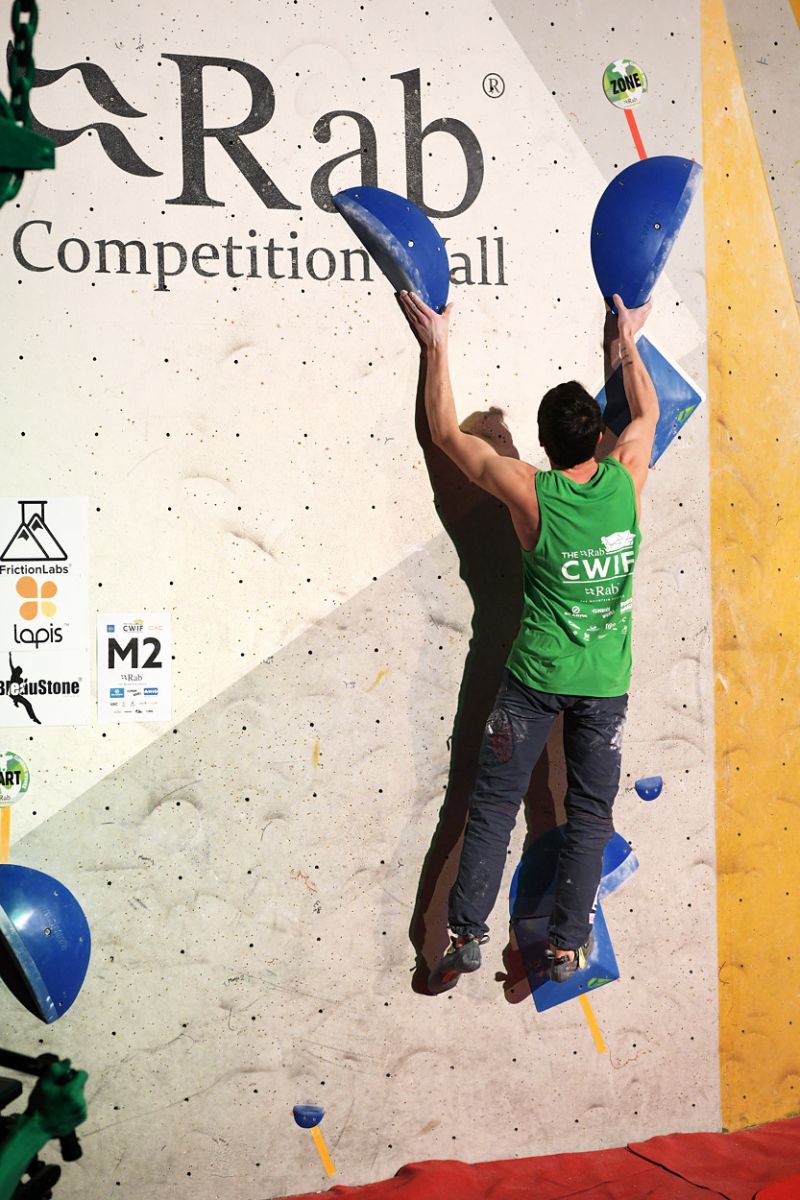 Only the six best male and female climbers went forward to the final on Sunday evening; this year’s final contestants could well have taken straight out of an IFSC bouldering world cup. Climbing in reverse order to their semi-final places, Stasa Gejo kicked-off the action with Molly Thompson-Smith, past CWIF champion Melissa Le Neve, Michaela Tracy, Germany Helene Wolf and Belgian Chloe Caulier following. The men’s final line-up was no less star-studded; from Alexei Rubtsov who started the men’s competition, followed by Sean McColl, Alex Khazanov, Will Bosi, Jan Hojer and Nathan Phillips. 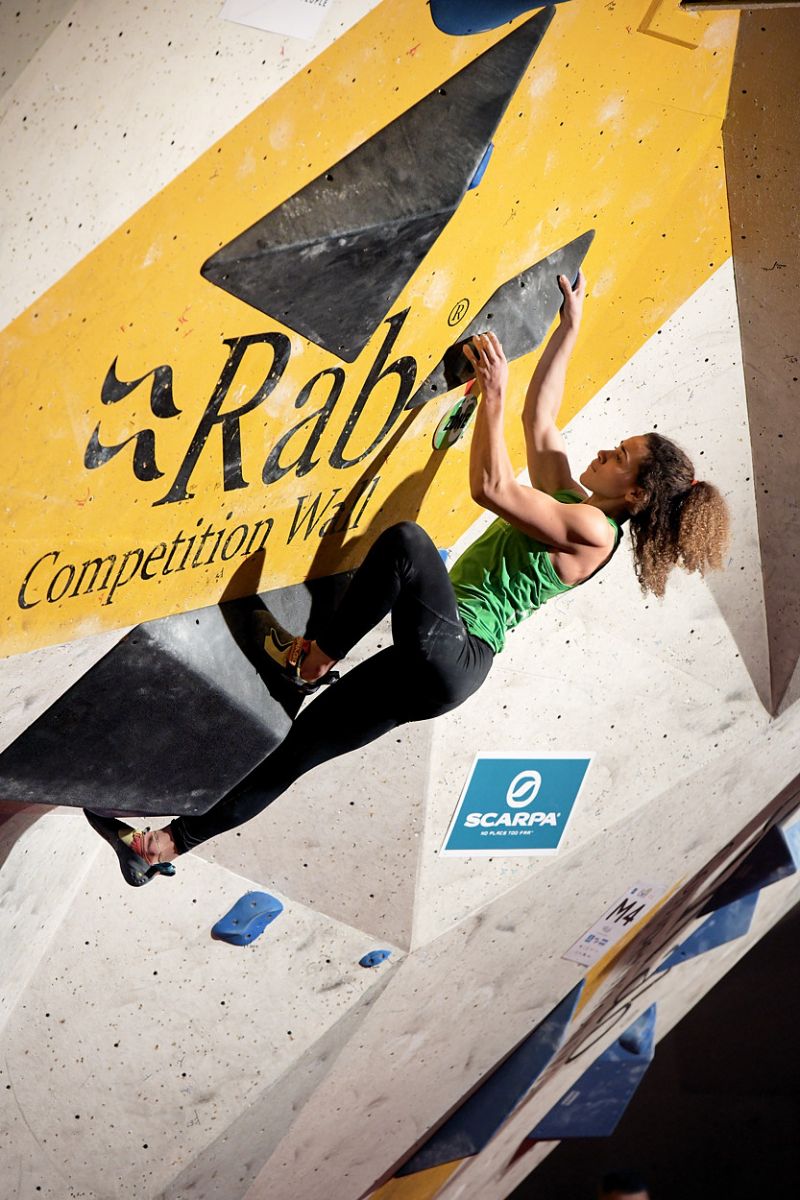 Stasa Gejo and Chloe Caulier got their campaigned off to a flying start when they both flashed W1.  Melissa Le Neve and Michaela Tracy both topped W1 also albeit taking three goes each. Maintaining their consistency, Staso Gejo promptly flashed W2 whilst Michaele Tracy got W2 on her third attempt – again. Midway through the finals then Stasa Gejo held a commanding position closely followed by Michaela Tracy. 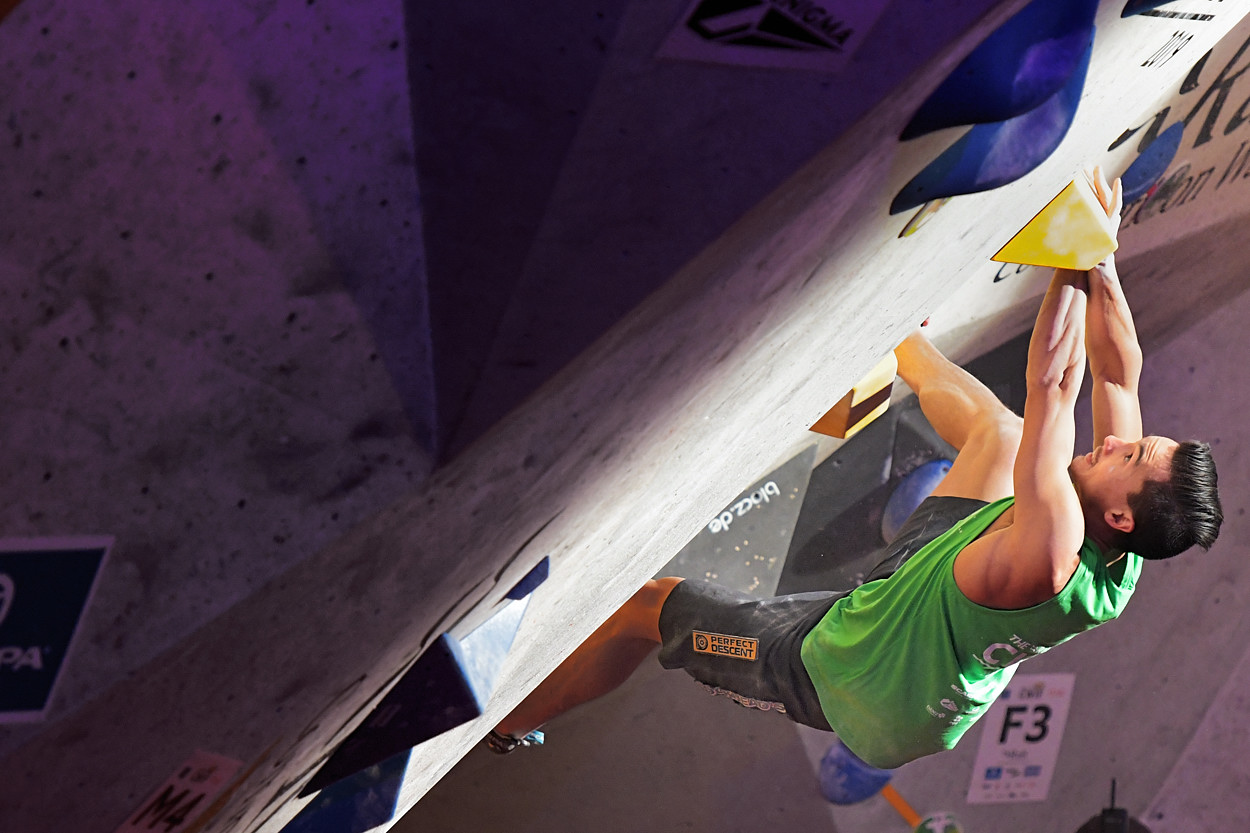 The men’s opening bloc was equally dominated by the on-form Nathan Phillips; he alone flashed M1 seemingly breezing past the initial hard moves that stumped many in the field. Past CWIF champion, Sean McColl, did M1 on his second attempt so it looked as though Nathan Phillips might have a challenger. M2, a super technical slab, reduced most of the men’s finalist to dust; more than one of them taking all their allotted time just to get both feet off the floor! Whilst Bosi and Hojer fought hard and got into middle of the bloc it was Nathan Phillips that really impressed; his prompt and seemingly casual flash must have been especially demoralising for the others! Alexei Rubtsov was the only other finalist to even make the zone on M2; notwithstanding however, he sunk no less than 21 attempts into M2! Dave “The Don” Barrans, who was closely watching the action, immediately assigned Phillips’s demolishment of M2 to the preponderance of grit slabs on which to practice!  Phillips, like Gejo, was going into the second half of the finals with both a commanding and well-earned lead.

If the first half of the finals belonged to Stasa Gejo, the second half was Melissa Le Neve’s. Le Neve started her run-in to the end of the final by flashing W3 whilst Gejo failed to top! Chloe Caulier was the only other finalist to progress higher than the Zone on W3 topping on her second attempt. By the time Le Neve had polished of the final bloc, W4, on her second attempt it was looking like it was a done deal. Chloe Caulier almost held the final hold on W4 but, as she had done on W2 earlier in the final, she failed to control the hold and failed to match and hence failed to get the top. Caulier got the closest but as none of the other finalists matched Le Neve’s three tops, Le Neve took the win and added a second CWIF title to her CV. 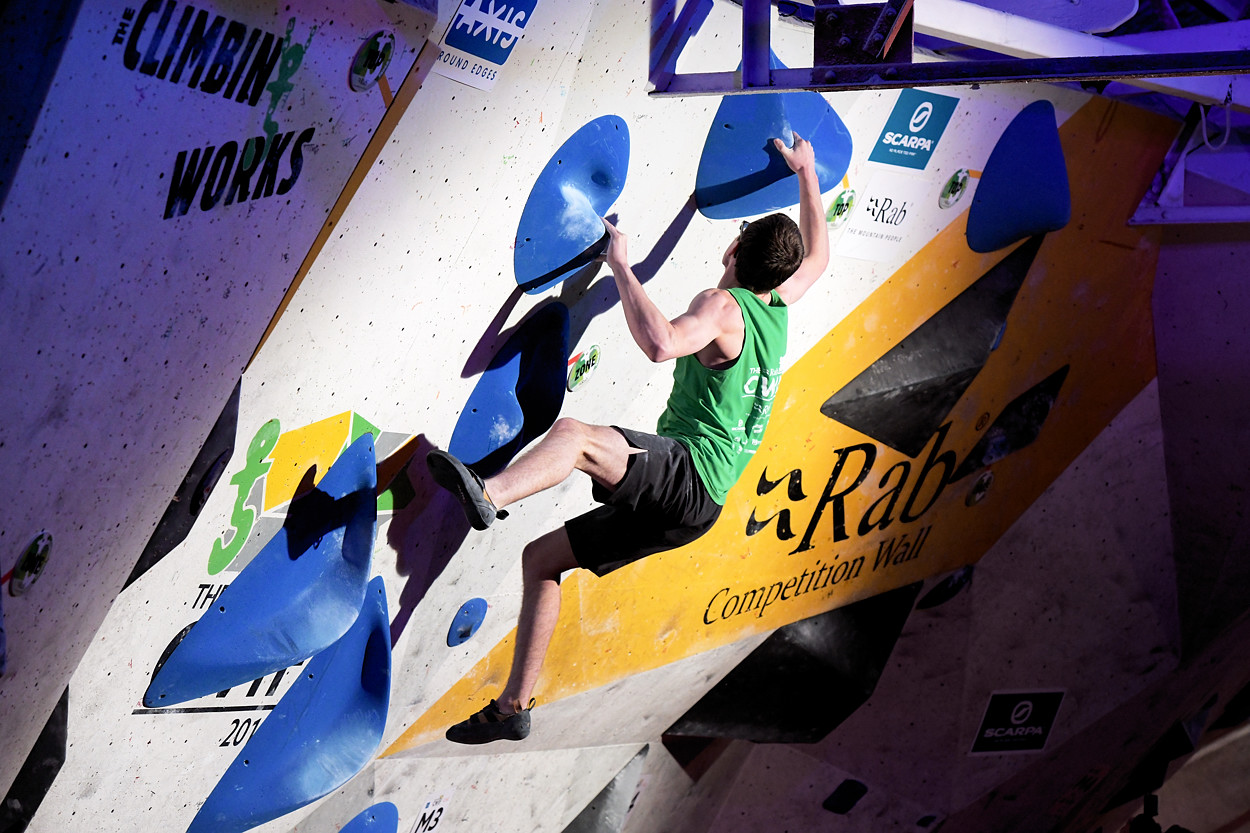 The second half of the men’s final was equally enthralling; M3 proving to a bloc too far for all the finalist including Nathan Phillips. To his credit however Will Bosi got within an ace of topping M3 latching, although not holding, the final sloper!  Former CWIF winner, Sean McColl was determined to finish on a high and he set British nerves on edge with a flash of M4. Nathan got close but didn’t top out but had done enough to take the CWIF title having collected all four zone holds to Sean’s two. 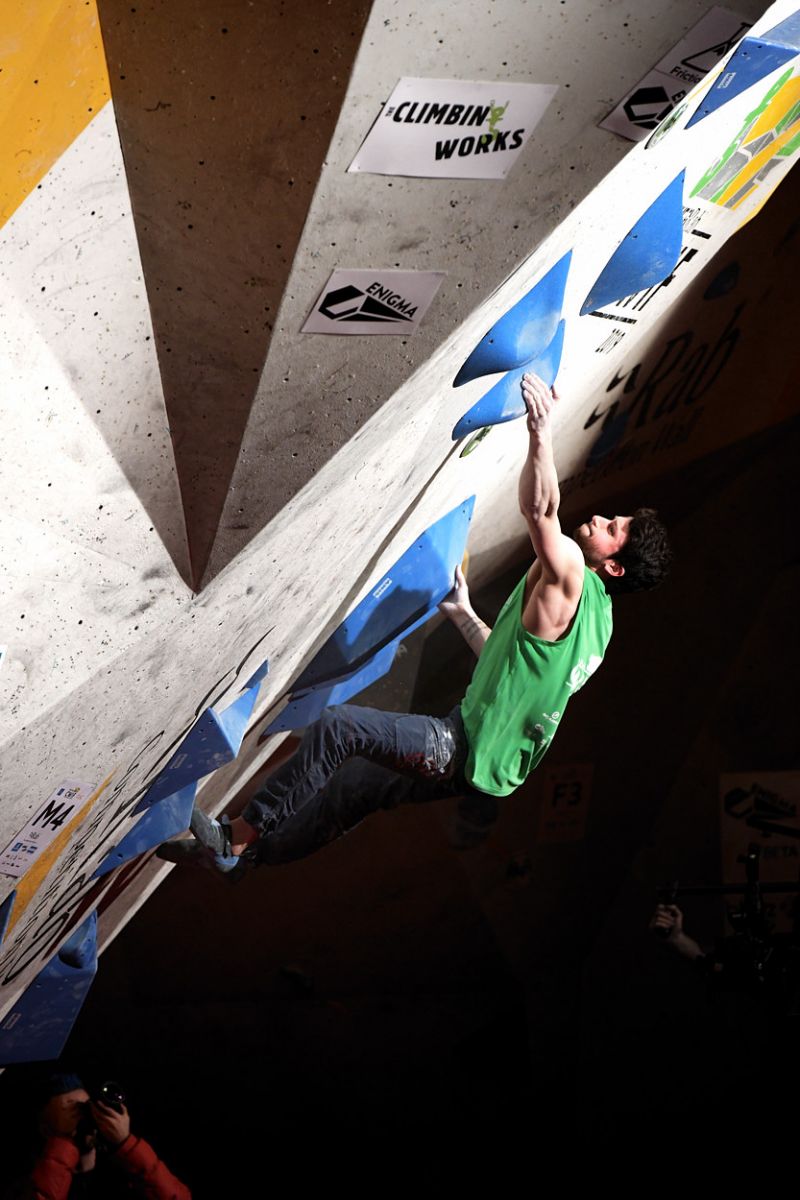 Speaking to Mina Leslie-Wujustyk after the finals Nathan admitted he had come with the intention of topping all the blocs in the comp. In the end he was just two short of his target; a damned fine effort. Melissa Le Neve loves the CWIF as she told Mina; “CWIF is an amazing experience as always, I love coming here, I love the style, the people, the British humour and the city is very nice.” 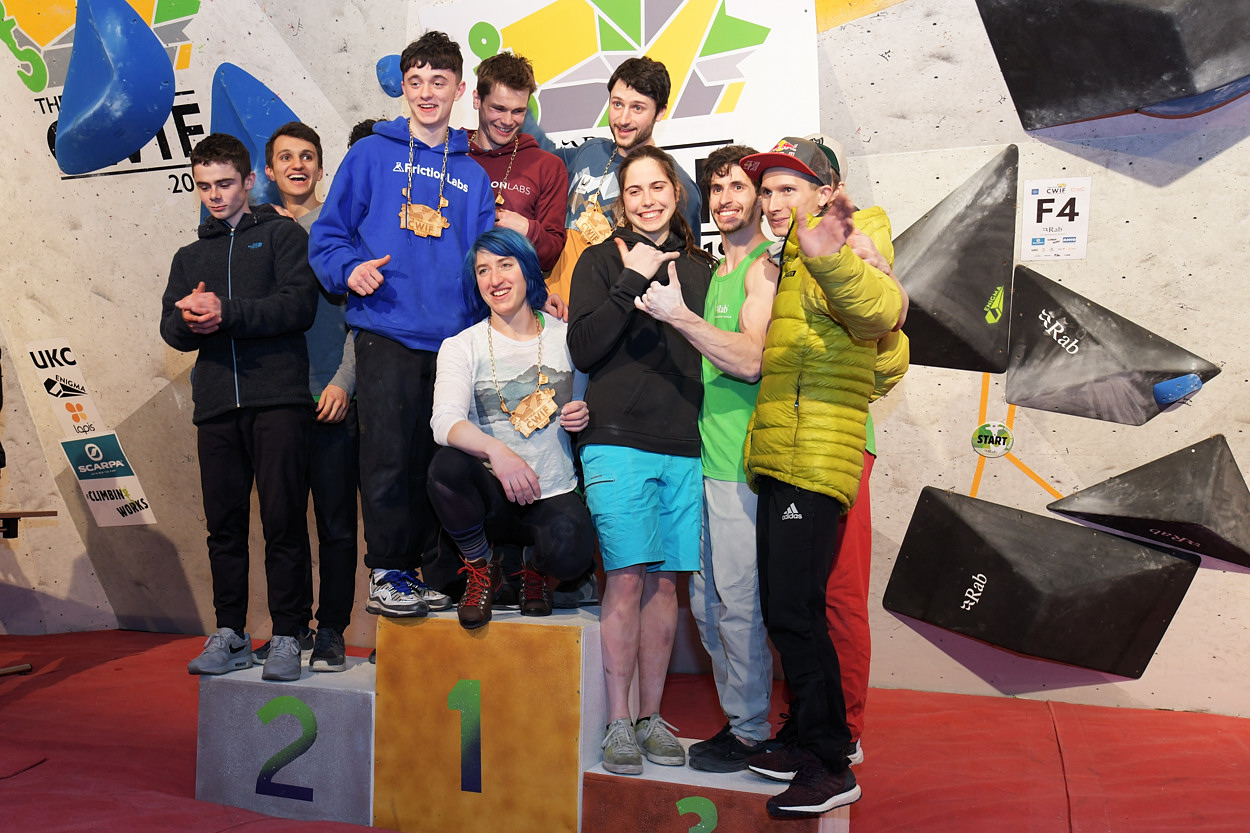 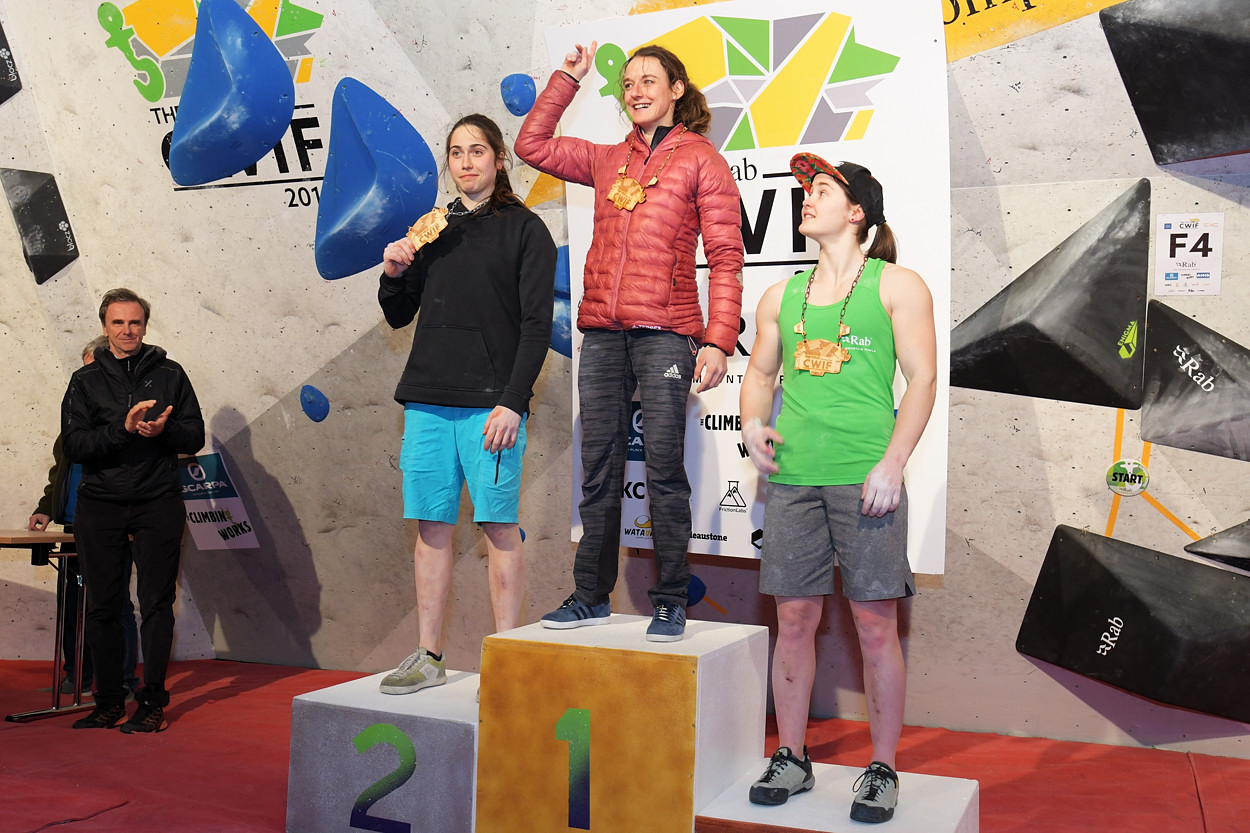 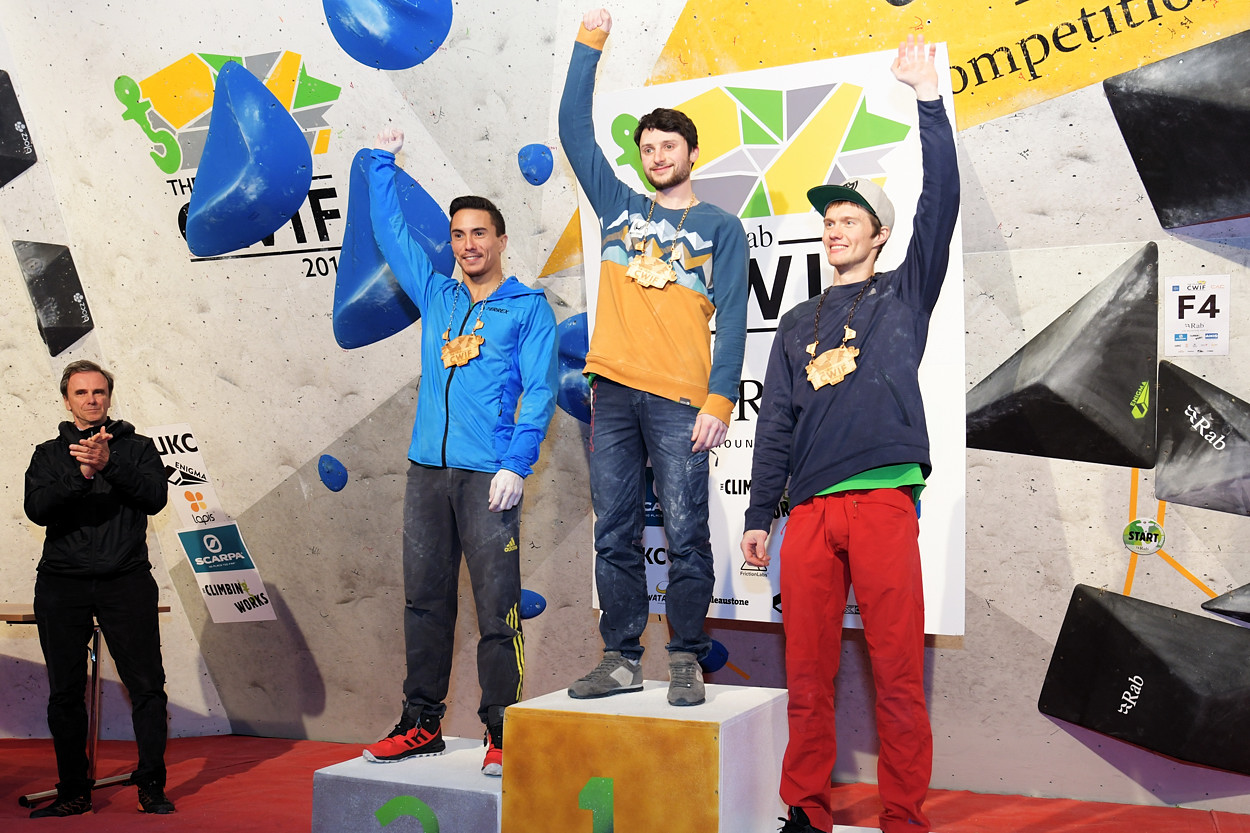 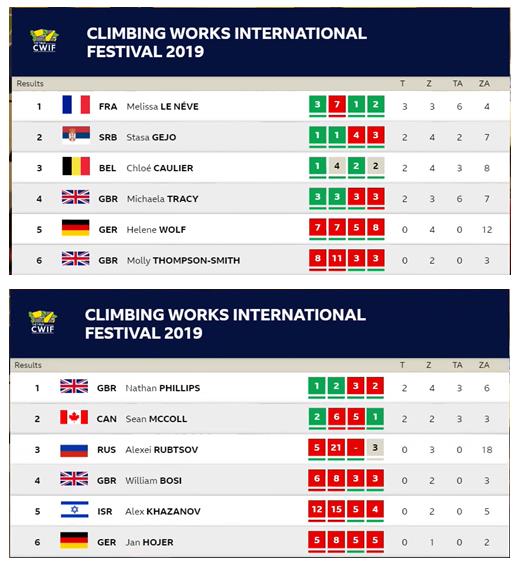 Watch the CWIF Finals below…