Colin Haley (American) and Marc-Andre Leclerc (Canadian) arrived in El Chaltern with big plans. Their first big objective, the first ascent of the reverse of the Torre Traverse, fell over a four-day period 18th – 22nd January.  Dubbed as “climb of the season” this south-to-north crossing of the Torres had been attempted previously by a number of climbers including Colin Haley. Haley’s previous attempt in 2012 with Jon Walsh was abandoned in the face of a storm. Haley and Leclerc called their route La Travesia del Oso Buda (literally the traverse of the bear Buddha) in honour of Bjorn-Eivind Artun and Chad Kellogg, two climber (subsequently killed in separate climbing inclidents) who had first attempted the reverse traverse back in 2012. Colin Haley, climbing with Rolando Garibotti, did the first ascent of the Torre Traverse back in 2008 so it’s quite a coup that he has also done the first ascent of the reverse. 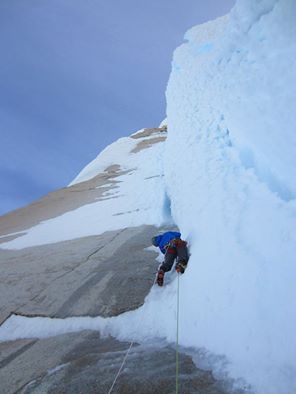 Colin Haley starting up pitch three of 'Venas Azules' on the South Face of Torre Egger. Day 2 of the South to North traverse of the Torres. Photo Marc-André Leclerc - Facebook

Subsequently, and over a two day period, 2nd-3rd of February, the pair did the first complete ascent of Cerro Terre’s north face establishing a line they have called Directa de la Mentira – literally, the Lie Direct. This is a reference to Cesare Maestri's disputed 1959 ascent of Cerro Torre via its northeast ridge. They followed the line of El Arca de Los Vientos, the 2005 route climbed by Rolando Garibotti, Alessandro Beltrami and Ermanno Salvaterra, to the Egger-Torre Col. Above the Col they veered away from the El Arca de Los Vientos by climbing direct up the north face, adding a total of six new pitches, before rejoining El Arca prior to the summit. These six pitches weren’t said to be especially difficult but they were climbed in a constant bombardment of ice shards from the decomposing summit ice mushrooms. The mixed climbing was said to follow splitter cracks on good rock. The headwall where these pitches are located is said to be covered in rime ice for much of the year in a typical year and under these conditions would be very difficult to climb. 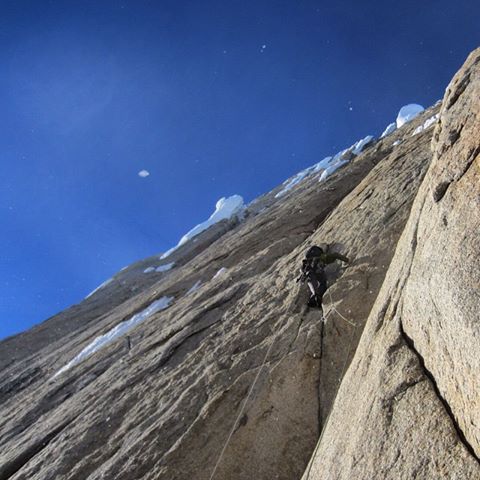 Although Colin Haley is a seasoned Patagonian veteran climbing in his 12th season, Leclerc has only visited the area once before. Nevertheless, his renowned skill for fast climbing – often solo - on both granite and ice have stood Leclerc in good stead. Climbing together, Haley and Leclerc clearly make an incredible climbing team.

Other climbers have also taken advantage of the better weather windows this summer as well including Toni Ponholzer and Peter Ortner who have done the first ascent of Tobogan on Torre Egger. Michal Brunner and JindÅ™ich HudeÄek, two Czech climbers, have also climbed Invisible Line, a new route on the northeast face of Poincenot.

Although the weather windows this year have made climbing much more amenable – especially when compared to last year – experts still maintain that in comparison with good seasons the current season is still quite poor.

Finally, Rolando Garibotti’s website PATAClimb (here) is an invaluable on-line resource.  More details are available on PATAClimb for the action this summer, including a major piece on Cesare Maestri's now discredited ascent of Cerro Torre in 1959 with Toni Egger.