Midlands-based GB Bouldering team member, Orrin Coley, has had a terrific run of late including the second ascent of In Search of Tyler (Font 8a+) at Forest Rock, Leicester. 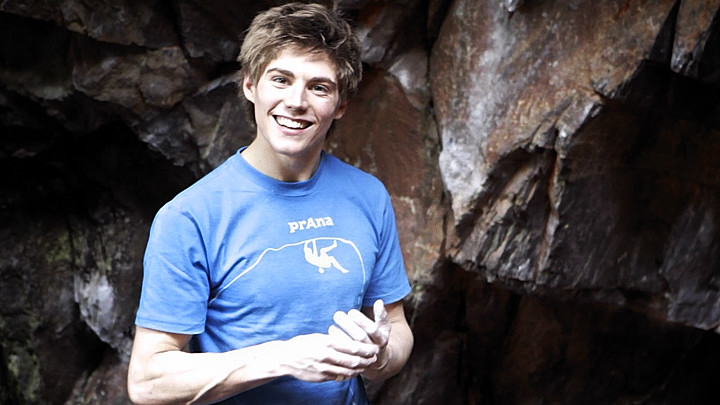 For those not familiar with Forest Rock - arguably it’s Leicestershire answer to Parisella’s Cave. To quote Niall Grimes; “ A grotto of brutality nudged into the corner of a sleepy Leicestershire village. Steep as hell with very powerful climbs.”  An old slate quarry, Forest Rock is home to routes up to E6 (Sorceress) and blocs up to Font 8a+ (In Search of Tyler). It’s a name that is banded about  every now and again but increasingly it’s seeing more attention these days. Orrin has been working through the card of hard problems here and his second ascent of ISOT comes as he’s preparing for the forthcoming bouldering comps.

Keen for the low down CLIMBER got in touch with Orrin…

Great effort on the second ascent of In Search of Tyler (Font 8a+). Can you tell us a little about the problem - what's the climbing like? Thanks! The climbing is actually really cool, it's got a powerful sequence of crimp undercuts at the start, then after a few shouldery moves, goes into a super intense crux where I'm completely spanned out before you get to the finish. It's also really long, 25 moves long with my beta, which certainly adds to the difficulty.

How did you come to get involved with that and how long did it take you? It's basically an extension to a traverse called In Search Of Blame (Font 8a) I'd always looked at ISOB and thought it was too hard for me so never gave it much effort. After my plans changed one day, I figured I'd give it a look and commit to projecting it.  To my surprise, an hour later I'd done it. The extension therefore became my next goal, in total it took four sessions to send it.  For a while I wasn't sure that I could succeed because I just kept getting spat off. One particular day, I pinged off a hold resulting in a massive blood blister on my fingertip which put me out for a few days! 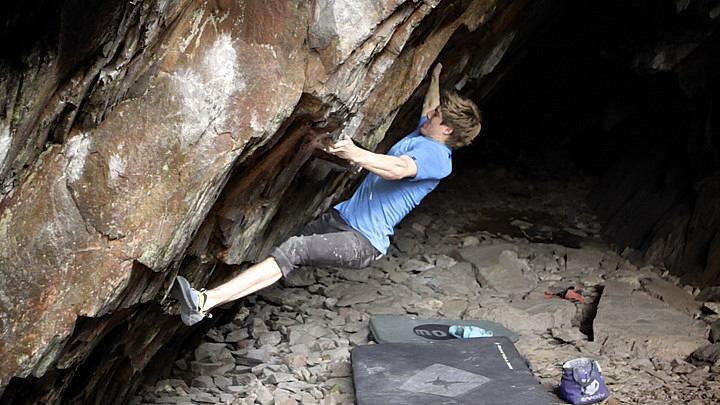 There’s quite a few hard problems at Forest Rock now – including some you’ve got the first ascent. How does it compare to the other cave bouldering venues around and it there much left to do? Yeah there are a lot of hard climbs now! My friends and I refer to it as Leicester's answer to Parisella's Cave!  Every line has been done, so we just keep coming up with ideas for link ups and what not. I put up a couple hard links too, Witchcraft Font 7c+ and then a further extension to that called Necromancer, which I gave Font 8a.  Realistically, I think it's harder than that but was nervous about grading any higher. The main thing left for me to do is a project which I'd always deemed near impossible, although given my recent form, my definition of what’s possible has been stretched quite a bit...

The last month you’ve really stepped up the pressure and you’ve had some great results – 5xFont 8a and a slew of other hard problems as well. Tell us a little about the stuff you’ve been doing and from what you’ve done which do you think are the more significant and why? Recently I've had the time to travel to the Peak, so I made the effort to climb lots. Each weekend I was managing a Font 8a, I wouldn't say any were more significant to me, it was just the psych that kept me going for another. I think believing I could climb these things actually helped me to climb them! It started after CWIF, when I figured I'd try The Dark Room and after getting an unexpected quick tick I just tried to keep the ball rolling. I've been visiting Anstons a lot and have slowly been working my way through the crag ticking Black Hoe, Wrestling With My Dangerous Soul, Quarantine and Soul Crusher (Font 7c/+ Flash). I thought I'd done Tsunami at Rubicon too but later found out that I hadn't used the approved sequence.  It still felt harder than any Font 7c+ I'd done, but I guess it's one to go back for!

You’ve been following a training programme we believe so can you tell us a little about that? A friend and colleague of mine has started “Over The Top Training” he provides training plans and coaching for all levels of climbers.  With the World Cups coming up, it was an ideal time for me to get a really structured training plan in place.  This involves lots of Ancap and Aerocap sessions plus more specific strength training. Although for me the deal breaker has been getting on the fingerboard lots more. I just see gains after every single session.

With the World Cup comps coming up soon you’ll be focusing on those as a Team GB member. How are you going to prepare for those, what’s your thoughts on how they are gonna feel and ($64 million question coming up…) how do you think you’ll get on? I entered my first world cup last year and had my eyes opened as to how strong these guys really are. They seem to make it look so easy on livestream, but trying them is whole different ball game!  My priority is to maintain my base fitness and strength. I'm really excited to be going to Austria, Canada and America for the European Championship and first two World Cups. The styles of climbs that you get in these events are like none other, exactly what I enjoy.  I can’t say what I will achieve but it’s great for me to pitch myself against the rest of the world.  I can see how far I have come and identify where I need to focus for the future.

And finally, what will you be targeting over the rest of the year outside? There is still so much that I want to try outside! After the American world cup a few of us are spending an extra week in RMNP so hopefully we can get some cool stuff done there! I’ve also got a load more to be done at Anston's, plus a few things at Raven Tor. Outside of the well-known climbing destinations, there are a handful of little known, local test pieces that I've been throwing myself at the last few months. Perhaps they will go in the near future...

Finally, thanks to Orrin for shining a spotlight into Forest Rock for us and to Crimpington Bear for the photos (video stills) and the film of Orrin repeating ISOT.

Click through here to go to Crimpington Bear Production FB Page and watch the video below.