UK Sport have announced that a total of £630k will used to fund climbers with ‘genuine medal potential’ at Tokyo. 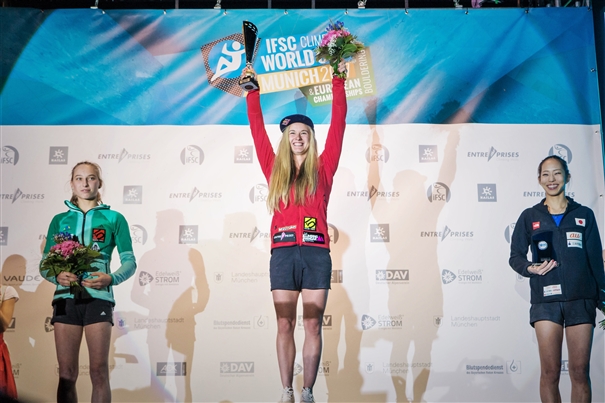 World Cup bouldering champion, Shauna Coxsey, is one climber which will benefit from the funding.

Ever since climbing was officially added to the Tokyo event funding announcements have been early awaited. Yesterday, UK Sport announced that climbing should be a priority for investment and confirmed that a total of £630,000 will be set aside.

A statement on the BMC website (here) has more detail:

The investment is subject to the submission and approval of a plan and an associated budget for the use of this resource, and the costs are based on implementing a ‘Medal Support Plan’ around key athletes. With now less than two years until the Tokyo 2020 games, a programme of support needs to be implemented quickly to benefit the athletes. Due to the urgency with which a programme of support needs to be put in place prior to Tokyo, any investment would be subject to the BMC agreeing to the programme being implemented through a partnership with the English Institute of Sport (EIS). The EIS would be the recipient of the award, and be responsible for forming and implementing the plan outlined above in partnership with the BMC.

Dave Turnbull, BMC CEO, says: “This is a great result for our top climbers and competition climbing as a whole in the run-up to Tokyo 2020. We’ve had some world class results in recent years and it’s great to see these achievements recognised through government funding. We look forward to working with the EIS to ensure our climbers have the very best possible chance of medal success.”

Liz Nicholl, UK Sport chief executive, says: “UK Sport’s vision is to inspire the nation through Olympic and Paralympic success. Today’s announcement, following the annual investment review into our summer sports, confirms strong potential to deliver more medal moments from more sports in Tokyo 2020. Exciting new events such as sport climbing, karate, para taekwondo and BMX freestyle will be funded to inspire a whole new generation of Olympic and Paralympic sports fans and it is fantastic that we already have world class talents ready to compete for medals in those events and more.”

UK Sport says that initial investment in the new Olympic sports will be made through new innovative and targeted medal support plans, as part of a new investment stream aimed at specific athletes with immediate medal potential in Tokyo. BMC ambassador Shauna Coxsey has been named by UK Sport as the athlete with the highest medal potential in the GB Climbing Team.

This comes as no surprise considering she is the reigning and two-time IFSC Bouldering World Cup Champion. Shauna has been ear-marked as one of the key athletes who will receive funding as, with training in the two other disciplines in the combined climbing event – Lead and Speed, is likely to do well in Tokyo 2020.

Shauna Coxsey says: “Today my journey to the Olympics became a little bit more real. UK Sport has announced its commitment to fund Climbing and I am fortunate enough to be recognised as a potential medalist. This funding will enable me to access elite level training support and help me to become the best climber I can possibly be. I am more motivated than ever to train hard and pursue my goals! I would like to thank all those who have supported me on my journey so far. It’s going to be an exciting few years! Bring on Tokyo 2020.”

Meanwhile, the GB Climbing Team has a number of young talented hopefuls with medal potential too, such as Molly Thompson-Smith, Will Bosi, Hannah Slaney and Jim Pope amongst others. They will now have to prove their prowess on the 2018 competition circuit to win a share of the pot.

Zoe Spriggins, BMC competitions programme manager, says: “It’s inspiring to see Climbing and the dedicated GB Climbing Team athletes gain recognition through government funding. We’re excited to be working to help competition climbing realise its potential in the Olympic Games in Tokyo 2020, and look forward to partnering with the EIS during this historic time.”

How does funding work?

The primary role of UK Sport is to strategically invest National Lottery and Exchequer income to maximise the performance of UK athletes in the Olympic and Paralympic Games and the global events which precede them.  Investment decisions are made on a four year basis wherever possible to cover a complete Olympic or Paralympic cycle but are focused on an eight year performance development model. Success is measured by the medals won, the number of medallists developed, and the quality of the systems and processes in place to find and support the nation’s most promising future champions. More information can be found on its website.