It is now c.24hours since the massive earthquake hit Nepal creating shocks and causing deaths in India, Tibet, Bangladesh and on the Nepal-China border. Following the initial shock – reported at 7.9 by the US Geological Survey – further shocks including ones up to 6.6 – have been felt across the region. The international community are now mobilising resources to help with the rescue efforts and experts in search and rescue started to travel to the area overnight. The latest news on-line in the Guardian’s news feed contain the latest from a Nepal police spokesman who has reported that the number of people injured has risen to 4629 whilst the death toll has risen to 1953. 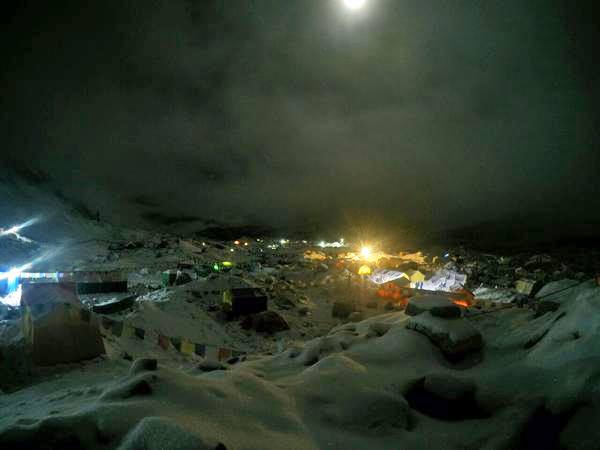 As we reported yesterday – see here for that news item – the Everest region has been badly affected by the earthquake which caused massive avalanches across the area. Although many climbers are posting on-line a full picture is hard to assimilate.

Various other expeditions are active in the Everest region as usual at this time. To the north side of Everest in Tibet, Sean James, a Sheffield climber now editor of Outdoor UAE magazine, has posted that the team he is with is safe and well in the northern base camp but that aftershock continue to hit the area. In his morning update he posted: “As we sleep on the ground in tents, last night we could still feel the ground trembling constantly. Apparently there were also a few larger shocks. We are safe here in bc and gathering all reports. Kathmandu seems destroyed and we had a visit from â€ª#‎Britisharmy everest team at breakfast who are wanting to pull back to Ktm and help the relief effort.” 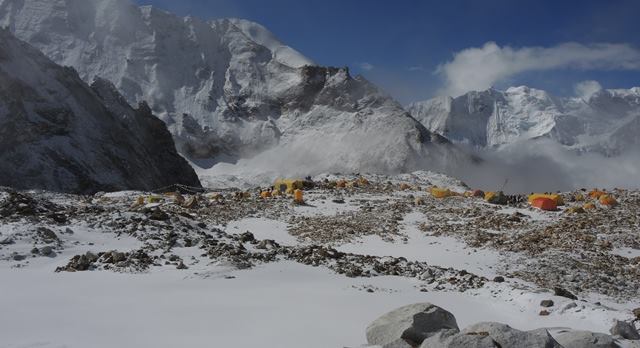 Messages posted by British guide, Victor Saunders, said that the team on his side of Makalu were safe. Also on Makalu is Adrian Hayes who posted a morning update earlier; “After yesterday’s devastation, quiet and peaceful here today. Approx. 40 climbers from 20 different nationalities grouped into approx. 10 teams are safely here – although, with the chaos, carnage and tragedy happening elsewhere in the country, we won’t be moving anywhere shortly, and only if the Sherpas want to.” Adrian reports that the steep ice wall (seen in above image) he descend an hour before the earthquake was subsequently avalanched on both sides.

Teams on Annapurna are reporting that they are ok.

However, the expeditions on the south side of Everest climbing the traditional South Col route have been worst affected. The Base Camp beneath the Khumba Icefall has been especially badly hit by avalanche and yesterday’s news was that 18 had dead in the camp. Many others have also been injured and are awaiting evacuation down the mountain to get treatment. Late last night a number of helicopters were reported as on stand-by to start evacuating the injured but the poor weather in the area was hampering/preventing flights.

The situation higher up the mountain appears to be that a large number of climbers – thought to be up to 100 in total - are cut-off in the higher camps (Camps 1 and 2). Posts this morning are of further avalanches at and around these camps and hence concern is now how to get these climbers off the mountain given that the access route through the Khumbu Icefall which connects base camp with the higher camps was destroyed by the avalanche. Although the initial intention was to heli-evacuate injured climbers only, it is understood from posting (@Northman PK)  that climbing equipment (ropes and belay equipment) has been dropped by helicopter at Camp 1 on the South Col route – presumably to assist with the downward re-establishment of a route through the Khumba Icefall to enable the mountain to be evacuated. 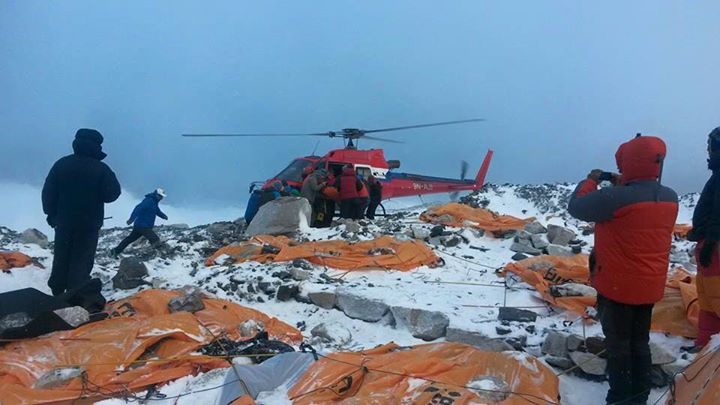 A number of deaths have already been announced by their respective expeditions and/or friends/families. Adventure Consultants report losing five members of staff at BC. The Madisson Mountaineering Team have reported the death of their base camp doctor, Marisa Eve Girawong. Jagged Globe say that Daniel Fredinburg, a Google executive on their expedition, died from head-injuries. A cameraman,Tom Taplin, is also understood to have died (@elizabethmenetr). It is believed that these deaths all occurred at Base Camp.

Further news will be posted.