Neil Gresham talks about his ascent of Sabotage

Closing out a long-term project, Neil Gresham climbed Sabotage (F8c+) at Malham just over a week ago. 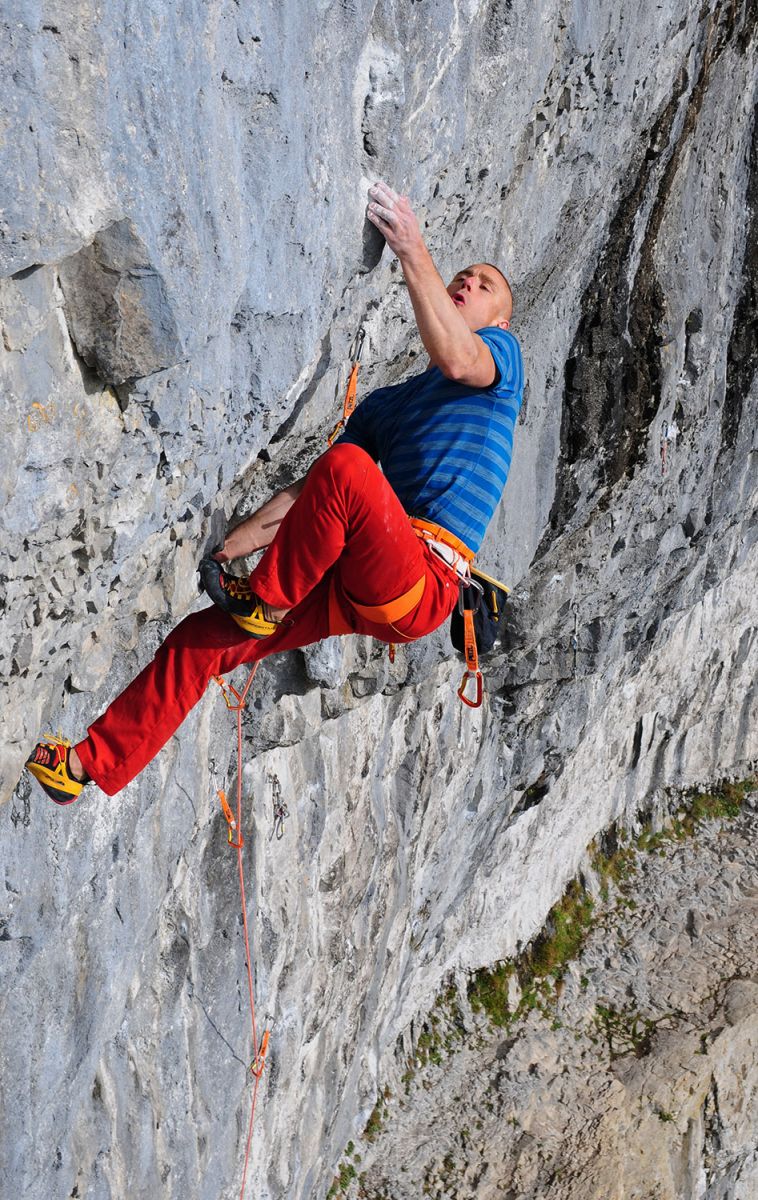 New routes are Malham are getting harder and harder; harder to find and harder to do. Neil however, has been successful in climbing two major extensions to existing routes above Malham’s catwalk – Sabotage takes in the whole of Predator and then blasts on up the headwall above.

Following our earlier report of Neil’s ascent, here, CLIMBER have been in touch with Neil and can now bring you his thoughts on closing out his latest project.

Great job on closing out your project - that must be a relief and time for a celebration?

Yes, it feels weird not having to squeeze as much training as possible into every spare second and to be able to eat and drink what I want, when I want. I don’t think I’ve ever felt as exhausted from a projecting campaign. My first move was to have a big night out and now it’s time to kick back and spend some time with my family.

Doing a new route at a new grade is doubly exciting and rewarding. Can you just describe the process you have been following both with your training and climbing.

Having missed the main sport-climbing boom in the late 80s and early 90s, it was always a dream of mine to put up a worthwhile new route at Malham or Kilnsey. I was very happy with Freakshow, my Kilnsey route from last summer, not least because it was my first 8c, and I guess Sabotage has been the icing on the cake. The grades of these routes are a bonus but it’s so much more important to me that they’re regarded as good rather than hard. In terms of training and tactics, I’ve learnt more in the last 4 years of my climbing than in any other period and I’m now a totally different climber to the one I was in 2012. The main thing was getting back into redpointing after a long break and also working with a nutritionist for the first time. Glen Burrows (of Supercharged Nutrition) has helped me to develop and refine a system for cycling my nutrition so that it synchs-up with the periods of training and performance. This has essentially enabled me to cheat my way into the body of someone who climbs 3 grades harder than me for very brief periods in order to snatch the redpoint! I honestly wouldn’t have believed things like this were possible a few years ago, but it shows just how much the science has evolved in recent years. 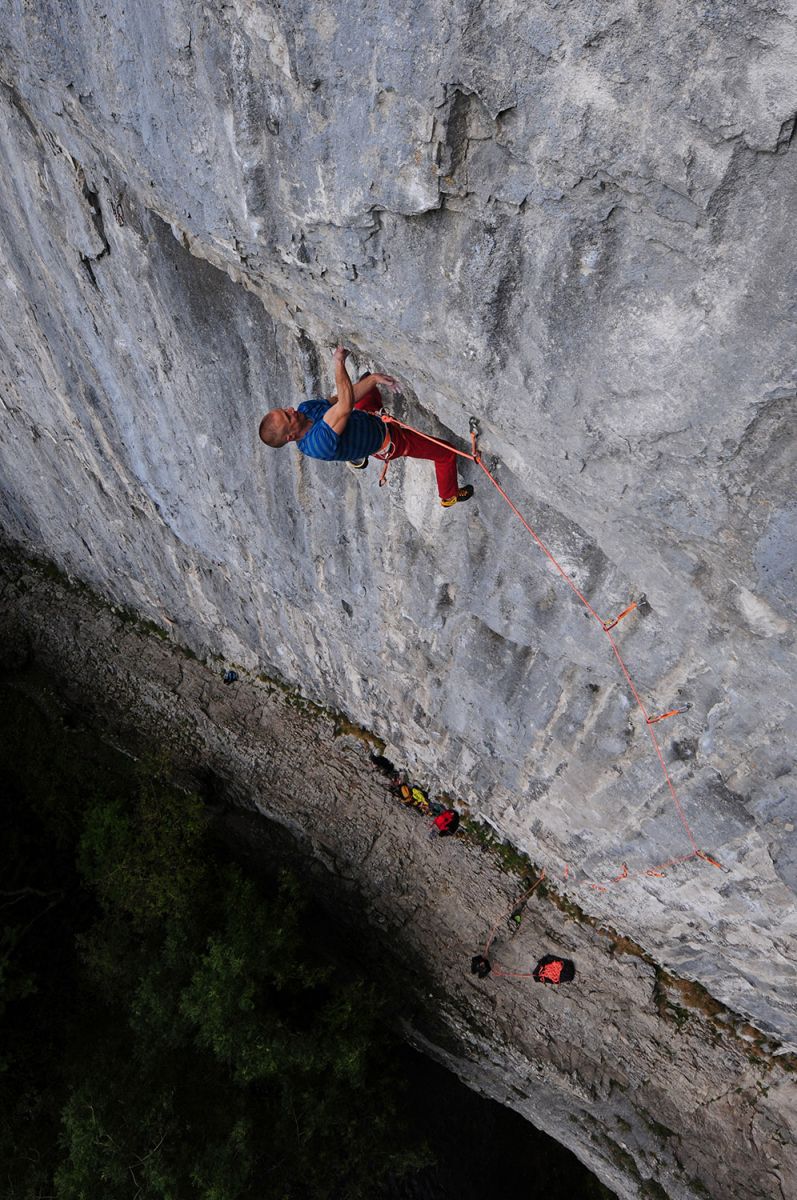 Neil starting the crucial sequence on Sabotage having climbed the whole of Predator (visible below). Photo Ian Parnell

So Sabotage kicks-in once Predator finishes. What's the climbing like up there?

The jump up in difficulty is considerable and for me the hardest part was switching into bouldering mode having done all that endurance-based climbing. The sequence is around Font 7b+ in standard and centres around 3 moves, using a sloping tufa in conjunction with a small undercut. Quality-wise it seems to blend well with the lower part of the route. There’s some slightly dubious rock on that headwall in a few places but Sabotage connects up the solid bits.

You had Predator off pat in the end - what was the most you did that in a day?

There was one day when I did it 6 times with 15 minute rests in between. I needed to get it to the stage where I could climb it fairly easily in order to have a chance at getting through the crux. I ended up doing Predator a total of 48 times during the whole campaign and didn’t drop it once. This is either a sign that the top crux is quite hard or that I need to work on my power!

Long term projects are notoriously difficult to close-out. What was your strategy on this?

This is the hardest part of all because as soon as you start to think about closing the deal then the pressure amplifies and you’ll be less likely to deliver. There was one day when I went to the crag expecting to do it, having been agonizingly close on the previous session, but I was a bag of nerves, shook my way up Predator and then messed up at the crux. The following session I was much more impassive and I neither expected to fail, nor to succeed. I just went there to enjoy the day out and focus on the climbing and it’s no surprise that I sent on that day. I used to believe that hard routes could be achieved in a whole variety of mental states, from the extreme positive to the extreme negative; but perhaps this only the case if the route isn’t at your absolute limit. It’s quite telling that with Sabotage, the day I did it was the day when my mood was textbook perfect.

What have you got your eye on next then? A grit proj perhaps?

My gritstone days are definitely over. I vowed that I wouldn’t try anything hard after doing Equilibrium in 2001 and I’ve managed to stay true to that. I’m a father of two now and hard grit definitely doesn’t go well with that. I’m keen to get back into Scottish winter climbing and also to get out on my doorstep in the Lakes this winter. I bolted a fantastic line at Kilnsey last year but at the moment, the thought of focusing everything on a project in Yorkshire isn’t too appealing! That said, I probably shouldn’t leave it too long in case someone else moves in.

Neil is sponsored by Petzl, La Sportiva, Julbo, Osprey and Sherpa. His fingeboarding app, 'Hangboardguru' is available on iTunes.

Finally, many thanks to Ian Parnell for the use of his excellent photos to illustrate this important story. Follow Ian on his blog here.