Neil Gresham â€˜back in the saddleâ€™ with Fearless (E9 6c)

Neil Gresham turns to the trad heart lands in the Lakes for his latest test-piece addition, Fearless (E9 6c) on Dove Crag. 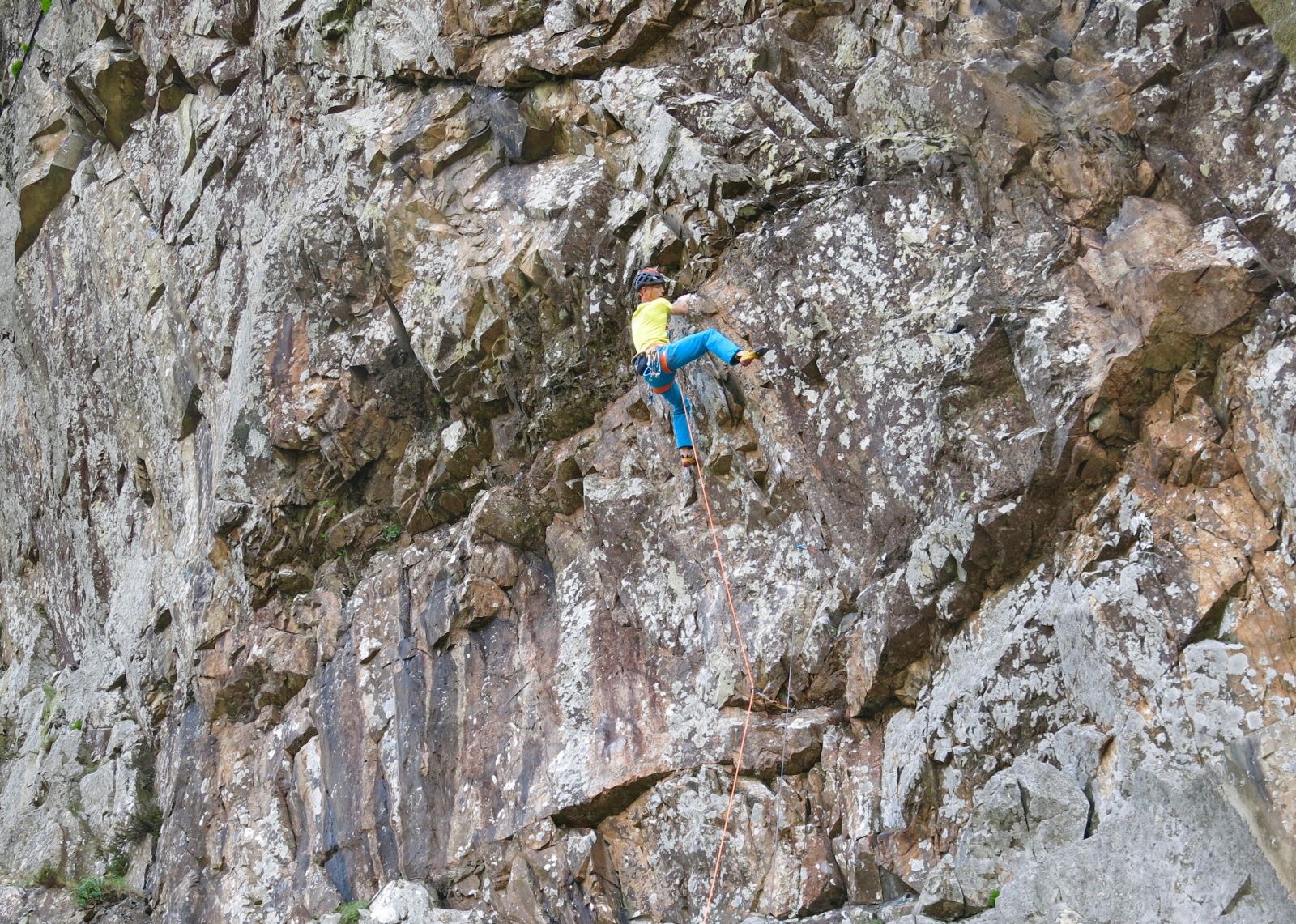 Neil Gresham on the lower crucial wall of Fearless (E9).

Those with their eye on social media will have seen that Neil has been mixing it up recently; ice climbing over the winter and some early season trad in the Lakes. Following quick ascents of some of the more gnarly additions at Shepherds Crag – Devil’s Alternative (E6) and Geronimo (E7) - Neil turned his attention to the mighty overhanging bastion that is Dove Crag.

Long revered as one of the jewel’s in the Lake District crown, Dove has attracted hard-core climbers ever since the year dot. Etched into the very psyche of the climbing world is Extol (E2+). Done by Don Whillans in 1960 – albeit with a point of aid – Extol is, as Chris Bonnington described it in Hard Rock – “rather like Whillans; direct, uncompromising and hard”. Development at Dove, like many crags, has gone in waves; the last wave was arguably initiated by James “Caff” McHaffie when he did Fear of Failure (E8 6c) in 2002. This monster 50m pitch has remained the hardest route at Dove despite the addition of numerous hard routes following Caff’s ascent. Fear of Failure, as with every other route in that area, starts up Fear and Fascination (E5+) and then traversed along Vlad the Impaler (E7) to avoid the initial overhanging wall. It is that wall that caught Neil’s eye and is the meat of his latest new route. 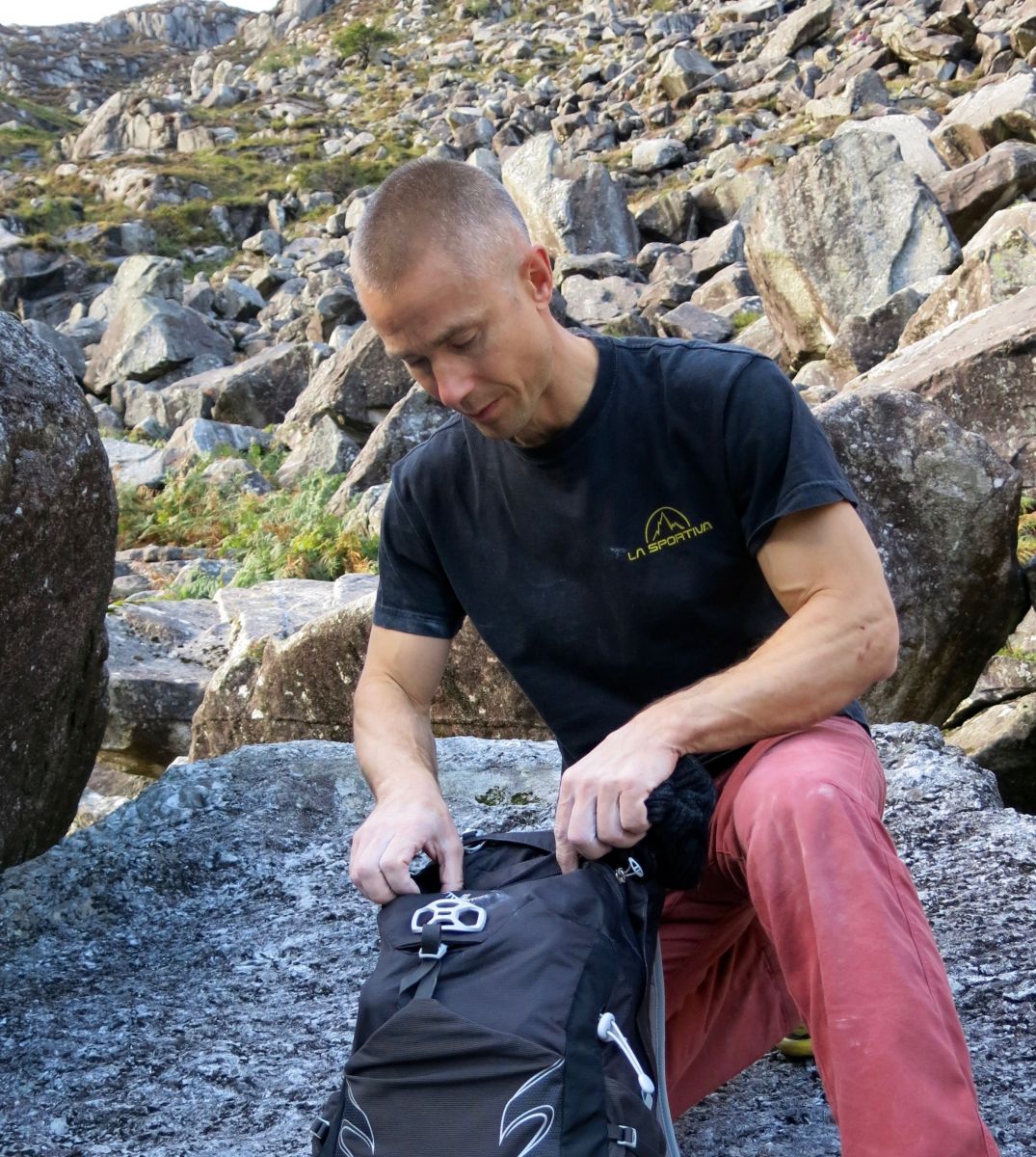 Neil back in the trad game…

Commenting on-line Neil summed up his latest addition; “It's a soft E9 and I confess that I'm rusty when it comes to this end of the grading system, having hung up my headpoint shoes in 2002. One thing's for sure, it's great to be back in the saddle.”

So Fearless, sounds tough even if as you suggest it’s ‘soft’ E9?! Can you describe the climbing please for us?

It's a route of two halves, with the new direct start being fairly serious. There's a steep, burly V6/7 bouldery section above a ledge and if you drop this you'll hit the ledge and then tumble down the lower wall. After this, some steep, physical but well protected climbing leads into the crux of James McHaffie's superb E8, Fear of Failure, which is safe but hard. Overall, Fearless is about F8a, though it feels 8a+/b placing all the gear and you certainly don't want to fall off the new lower section. I think there has been some suggestion that Fear of Failure might be low in the grade; however, I'm fairly sure that if we're taking this route as E8 then the new start is enough to bump it up a grade.

When did you first become aware that there was a possibility that the lower wall might be climbable?

I've always wanted to climb at Dove - it's one of those mythical crags with a concentration of incredibly steep but well protected routes in the upper E-grades. I picked up the guide recently to get the psyche on, and when I looked at the topo I noticed that three of the routes on the middle part of the main face seemed to traverse in along a diagonal fault line, rather than going straight up through the obvious steep, blank section below. Sure enough, on abseil inspection, I realised that the direct line was on.

What preparation did you have to do for the route?

I guess I've slowly been regaining my form and recently I flashed Devils Alternative E6 and made a quick repeat of Geronimo E7 at Shepherds Crag, as well as doing a minor new E6 at Burnt Crag. The main thing for me was getting my eye back in, having essentially taken a fifteen year sabbatical from trad. I've been focusing on sport projects in Yorkshire for the last 4 years, so my strength and fitness are pretty-much there. It was just a matter of getting my head in gear and putting it all together.

How did it all go on the first ascent?

It was a total nail-biter. The pressure was on and I needed to do it on the day, as I now have a month's worth of fixtures in the diary and I won't be able to do much training during this time. To be honest, I was pretty concerned about the bold section - there's never a good time to hurt yourself and all the memories of psyching up for grit 'headpoints' came flooding back. Fortunately I made it through this part but then my next concern was to not fall off the safe, upper part as this would mean having to do the start again. I was pumped out of my mind but just managed to claw my way through.

Neil is sponsored by La Sportiva, Petzl and Osprey Europe.