Mirror Wall - the film - a review from Kendal

A review by Noel Dawson of Mirror Wall  - the film by Matt Pycroft featuring Leo Houlding and team and premiered at Kendal Mountain Festival 2016.

There was great excitement in the sold out theatre at Kendal Mountain Festival for the showing of Mirror Wall, the latest amazing offering from Leo Houlding and Berghaus. Leo took to the stage and gave a short introduction to the film. He particularly paid tribute to the work of Matt Pycroft, the director of Mirror Wall, whom Leo described as ‘… disease ridden, disabled and cursed’. Nice! To be fair, Leo did go on to explain Matt’s illness and his disability and that the curse was the fact that prior to Mirror Wall Matt had never been on a totally successful expedition. Leo’s team was made up of ‘diseased’ Matt Pycroft, Matt Pickles (distant cousin of Jason Pickles), famous tree climber Waldo Etherington and South African Joe Mohle. 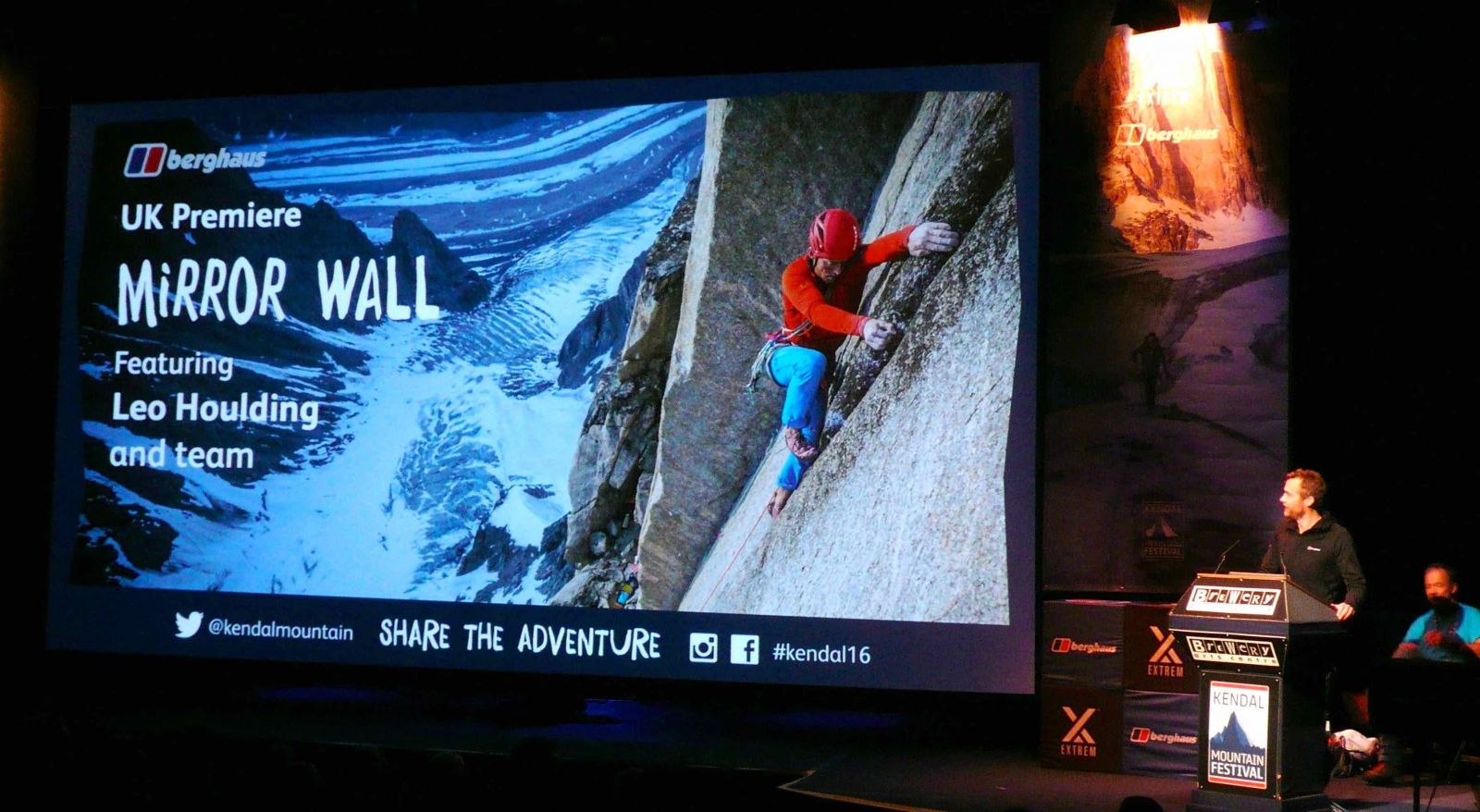 The Mirror Wall is a 1200 metre granite wall which sits above the Edward Bailey Glacier in Eastern Greenland. A Swiss team climbed both the left and right sides of the north-west face in 2012. Leo and his team were in Greenland to attempt a first ascent of the centre of the face.

Mirror Wall in many ways reflects a new chapter in Leo’s life. He explains early in the filming that much has changed since his last major film, The Last Great Climb. He is now the very proud father of the beautiful Freya who has filled his life with a wonder which he could probably never have imagined. She has, in many ways, changed his perspective on adventure and risk.

Leo also describes in his narrative the loss of one of his best friends, Sean ‘Stanley’ Leary, who shared many ‘risky’ times with Leo, some of which pushed them both to the very edge of the edge. One too many risks saw the terrible loss of this humble, amazing young climber who was so looking forward to being a father himself. The Leo we travel with in Mirror Wall has the joy of fatherhood while carrying the sadness that his friend ‘Stanley’ would never know that joy.

Leo is a man of incredible dreams and the climb of Mirror Wall can certainly be added to the list. The beauty of Greenland is amazing and has a profound effect on the whole team. Matt Pycroft is to be congratulated for his excellent interpretation of the landscape, his breathtaking filming of the climbing and the revealing way he has portrayed each of the Houlding team. The new team may lack the cutting edge wit of Jason Pickles and the unique coffee making ability of Chris Rabone but, with a bit of help from Leo and Matt, they have started to develop their skills doing pieces to camera and have mastered the ‘middle distance stare’ and the expressions so important for the dramatic, ‘Will we make it?’ shots. The well chosen soundtrack pulls the filming together and the computer wizardry of Adrian Samarra adds the final polish to this beautiful film.

A packed audience for Mirror Wall.

Surprisingly, the film would have really benefited from more climbing footage. At times it became, in a fascinating way, more about the lives of the climbers, particularly Leo, rather than the climb. Leo really wears his heart on his sleeve and shares with us some anger about, and some re-evaluation of, distant times in his life.

The final scene shines on Leo the dad at home with his family reading great stories to Freya. You feel that one day he will share his own adventures with Freya (and Jackson) and they will, like the audience in Kendal, be amazed by what daddy did.

Of course the audience are the real judges and Mirror Wall was very well received by the climbing community in Kendal.

What next for Leo?

Leo has a seemingly insatiable appetite for exploration and he told us just a little about already planning his next adventure. It will carry him to a brutal landscape in some distant, rarely explored area of the world and will allow him the opportunity to challenge himself and his team to fulfil yet another of his wildest dreams.