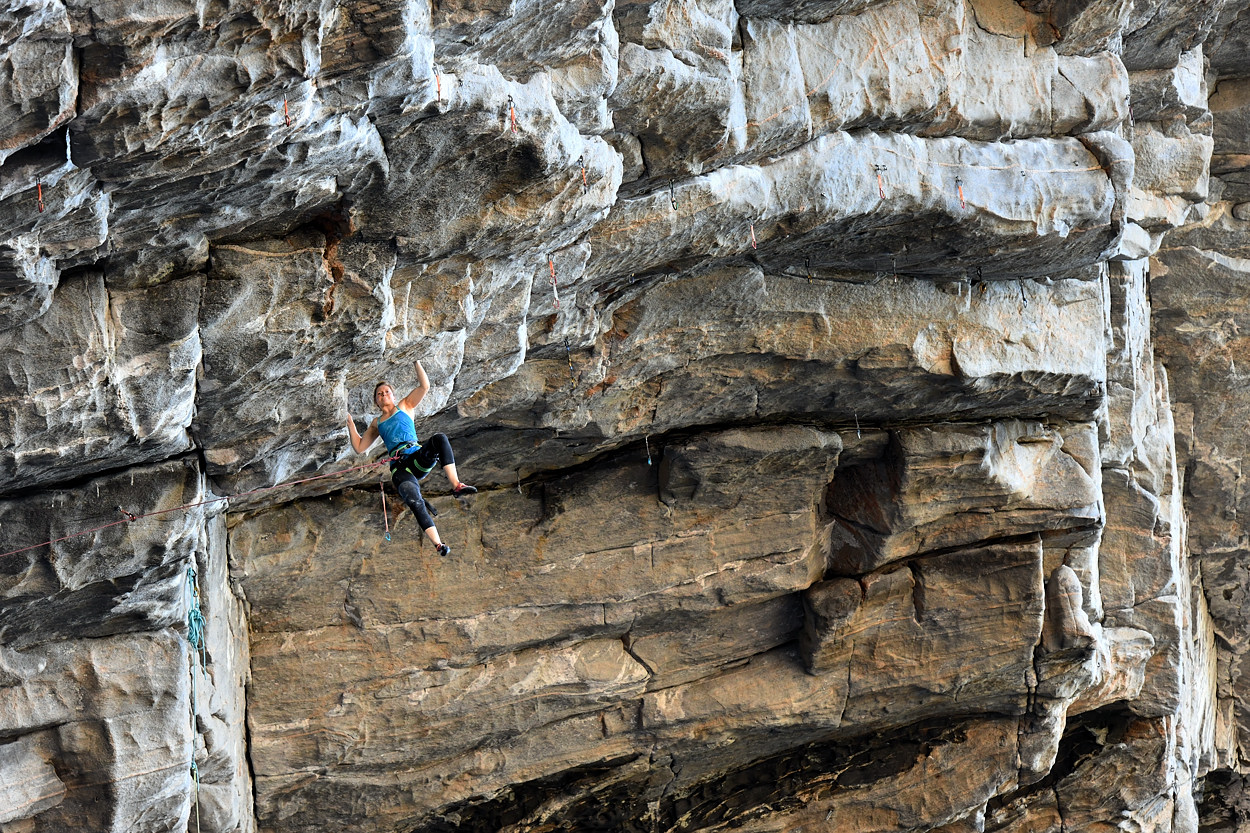 Mina cutting loose on the upper section of Nordic Plumber earlier this week with the finishing rail clearly visible beyond. Photo Keith Sharples

Mina rocked-up to Norway in mid-August on a short bouldering/sport climbing trip with her partner, Dave Mason and their Norwegian friends. The typically variable, read wet and windy, Norwegian weather impacted their plans however and Mina’s intended short visit to the Hanshallaren Cave became much more of a focus. After opening her account with a number of easier routes, Mina was then drawn into the main cave itself where she made a quick ascent of the first two sections of Nordic Flower (F8b+).

Following Nordic Flower, Mina got involved with Nordic Plumber; Ethan Pringle’s 2012 link-up the starting section of Nordic Flower into the upper section of Adam Ondra’s Thor’s Hammer (F9a). At c.50m in length it’s a massive route – all of which is overhanging. Starting in the very back of the cave, the first ‘pitch’ - shared with Nordic Flower - is a hard (extended) boulder section of about Font 7b+ followed by a route 7c to the ‘change-over station’. Overall, the first pitch weighs-in at 8b. At the change-over, and whilst ‘resting’ in a massive knee-bar, the rope is pulled though to reduce rope drag. The second ‘pitch’ of the Nordic Plumber from the change-over station to the lower off starts with a c.25m roof section which is about route 7c+ in it’s own right. The final section of the Plumber involves a specular grit-style sloping rail which is about Font 7a/a+. Overall, the second section of Nordic Plumber is reckoned to be another route 8b.

Great work redpointing Nordic Plumber – your hardest ever redpoint you said when you lowered-off!

Mentally hardest for sure. It’s hard to say physically because it’s so unlike any of the other harder routes I’ve done, such a different style to what I’m used to! But mentally I found the process of redpointing it really tough. It’s a long route and has a very high redpoint crux which I dropped four times before sending. It doesn’t sound that bad but the route is SO long and often I only had one good attempt a day if I was falling that high. That and my trip was coming to an end, I really struggled to shift the pressure of the time limit. In the end I had to try my best to let go of the outcome as much as possible and just try to focus on enjoying the climbing and trying my best.

How did you get hooked on Nordic Plumber?

I originally tried and did the 8b+ finish to Nordic Flower because my friend Maria was trying it and she inspired me to try it with her. That one is also an awesome climb. Nordic Plumber shares the same start but then busts out left, taking on a striking line through the centre of the cave and finishing on the classic slopey rail.

And your view of the route?

It’s circa 50m of roof climbing! A hard bouldery start progresses into sustained, full body, pumpy climbing on a variety of undercuts and amazing features, interspersed with classic Flatanger knee bar rests. It has some cool boulder problems in it high up, and the crux is agonisingly high on slopers.

And what was the hardest part for you of Nordic Plumber?

That damn rail hahaha. Jokes aside, each red-point took a lot of mental energy and that was probably the hardest part.

Clearly you were impressed with Flatanger and the Hanshallaren Cave.

Hanshallaren is truly an impressive feature and with a climber's eyes it is even more striking. It's super steep but the granite makes for really interesting climbing; you are climbing features more than hold to hold. It's 3D, dynamic and very involved physically. After the first few days I felt like I'd been hit by a truck.

Can you see yourself coming back here again and if so what do you think you’d get involved with? Absolutely! Oh I'm not sure, maybe Odin's eye? Who knows?

Looking forward, how do you think this will help you and your long-term goal of Rainshadow at Malham?

It definitely worked my fitness, that's for sure! The style is also conducive to building good body strength which I think I will benefit from. Having said that, as it's so steep, the holds are bigger so my fingers might be really weak now....

Now you’ve redpointed Nordic Plumber is it back to training and Malham for the autumn season? Yep, back home and probably just stay on the rock and head straight to Malham for a few weeks before I go back to Red River Gorge for November.