Mike Adams reports that he’s added a sit start to One Clear Moment at Forest Rock, Leicester to give a new Font 8b. 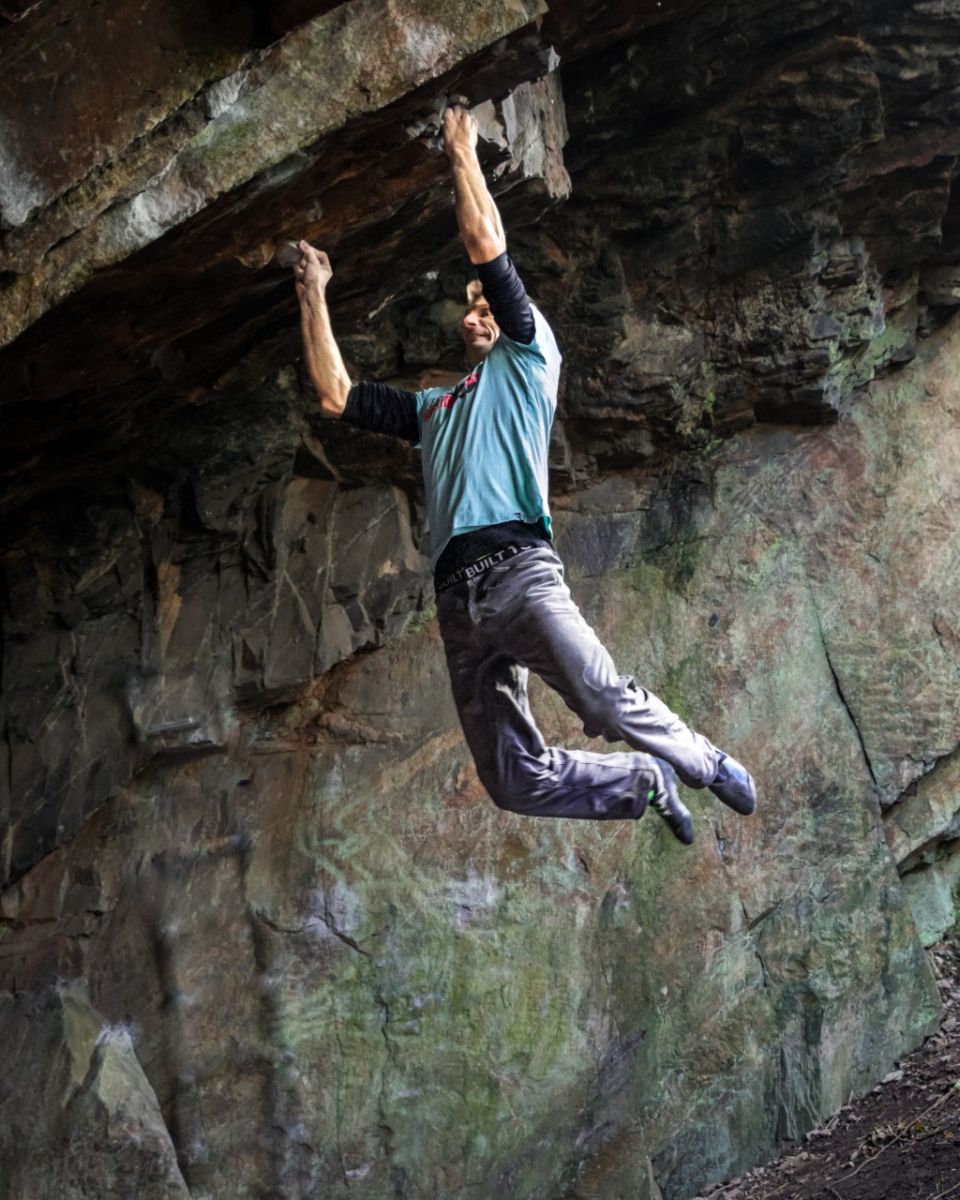 Leicestershire isn’t exactly renowned for its climbing venues; typically coming second or even third fiddle too many of the other Shires. However, Forest Rock on the outskirts of the small sleepy village of Woodhouse Eaves, is one of the few exceptions. Forest Rock is described by Grimer in Boulder Britain thus; “A grotto of brutality nudged into the corner of a sleepy Leicestershire village. Steep as hell with very powerful climbs”. Not for the first time, Grimer’s venue summary hits the nail firmly and squarely on the head!

In fact, Forest Rock has been something of a magnet for hard-core boulderers for some time. Originally an aid-climbing venue, the routes were freed then de-geared. As well as some locals, Peak-based Mike Adams and Dawid ‘Polish Dave’ Skoczylis have been visiting there on and off for a few years. Local blocmiester Orrin Coley has likewise been stamping his own name on the overhanging madness at Forest Rock for some time.

Early in the new year Mike added One Clear Moment (Font 8a+) just to the right of Lucid Interval (Font 8a) – a Polish Dave offering from 2013. Mike’s One Clear Moment starts on high undercuts and then takes a direct line to finish as per Lucid Interval albeit without using the arête or any of the holds beyond. Mike’s sit start’s is just that.

Mike has given CLIMBER the low-down on his ascent; “The moves are hard but I managed to do them all okay once I had worked it all out. The stand went down on the first session I tried it and I sort of wrongly assumed that the Sit Start would go quite fast as well. However the Sit moves turned out to actually add quite a lot. They are not easy and you have to be slow and quite precise. This meant I was just powering out on the top powerful cut off and campus moves. I have never considered power endurance one of my particular strengths in bouldering. It became a bit of a battle to try and get the right factors to line up: time, good conditions, dry holds and feeling good. This is easier said than done with a full time job and two kids. I just kept going there and one of those factors wasn’t right! So it turned into grinding it out in seven sessions over four weeks. I’m just so glad I managed to get done in the end.”

For those not familiar with Forest Rock CLIMBER asked Mike where he would compare the climbing too; perhaps The Bowderstone we thought; “I’ve always thought of Forest Rock as the Midland’s humble answer to the popular Parisella's Cave in North Wales. There are some epic link ups here that have been done by Orrin just like there. However, the Bowderstone is a great comparison as the climbing and rock feels very similar. As in it’s mostly big moves on okay holds. Forest Rock is a bit different as most of the holds face awkward directions so it leads to naturally interesting movement. Obviously Forest Rock is a hole in the ground and not a boulder. Another good thing is it can give very reliable conditions. Being cooler in the back of the cave in summer and in winter the seepage isn’t that bad compared to peak limestone so it dries fast.”

Footnote: Just as this report was about to be uploaded we’ve had news that Orrin Coley has been back at Forest Rock today and has managed the second ascent of Mike’s Once Clear Moment Sit Start. Orrin told CLIMBER; “Yeah it's tough, really works you out. It's a big power endurance climb, about 15 moves or so and every move is fairly demanding, so it just starts to tire you out. Then you get a heartbreaker move right near the end before having a more or less campus finish, so if you're a bit pumped it's a nightmare to fight through.”

Impressive stuff! We hear that even harder stuff is being worked at the moment so watch this space!