More details are now available on the first ascent of Sersank by Mick Fowler and Steve Saunders.

Further to our ‘Breaking News’ story on Oct 11th – click here for that report – we can now bring you more details on their ascent. 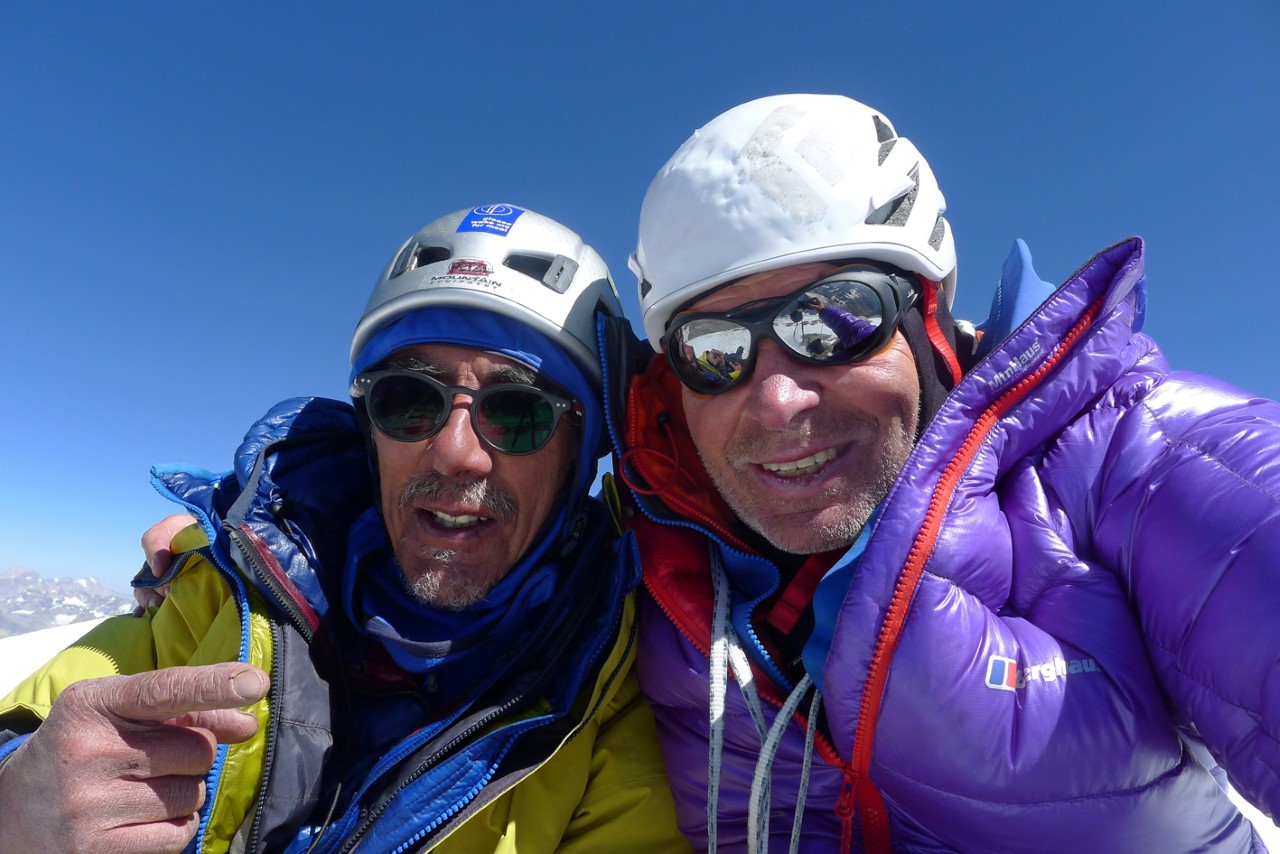 Vic Saunders and Mick Fowler on the summit

Mick Fowler and Vic Saunders, climbing together for the first time in almost 30 years, successfully completed a first ascent on Sersank (c6,050m) in the Indian Himalaya reaching the previously unclimbed summit at 12:30pm on 3 October, by the unclimbed 1,100m north face of the mountain.  The last time the two climbed as a team was their first ascent of the Golden Pillar of Spantik (Pakistan) in 1987.

Mick Fowler and Vic Saunders left the UK in mid-September and flew to Delhi.  From there, they had a three day drive to the road-head, followed by a two day walk in to establish base camp.  After acclimatisation, the climb itself took five days, during an eight day round trip from base camp. 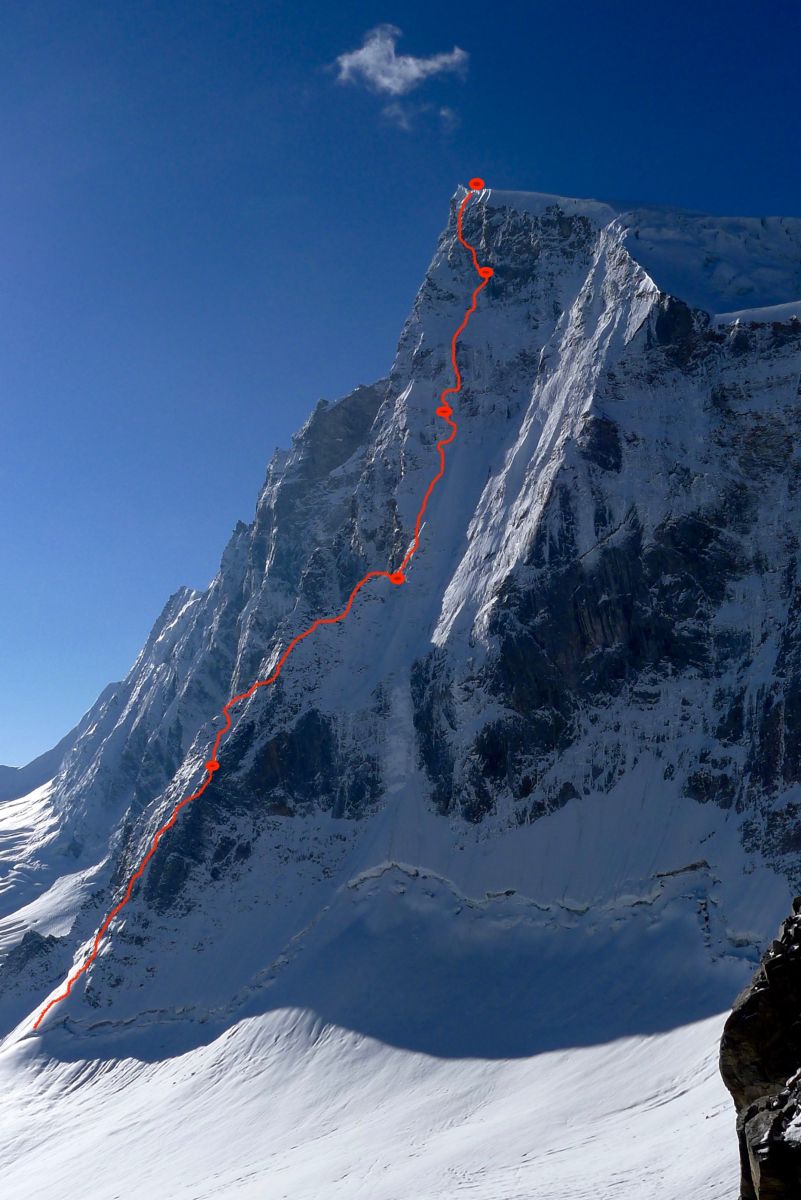 The line of the ascent

“We decided that the easiest access would be to trek across the difficult and rarely used 5,000m pass of the Sersank La and descend the far side to the foot of the face.  Fresh powder covering the rocks made this exhausting but after overcoming the usual array of Himalayan hurdles (including an unfortunate mix-up of pee and drinking bottles!) we set off up the face on 28 September.

“Heavy snowfall on dry cold rock made for challenging conditions.  For two days we swept away snow and inched up the disturbingly blank rock below.  By the end of the second day a lower buttress and sharp crest had been overcome and we were firmly established on the cold confines of the north face proper.  Here the conditions were better but it became clear that Victor's body was unable to process our dehydrated food. 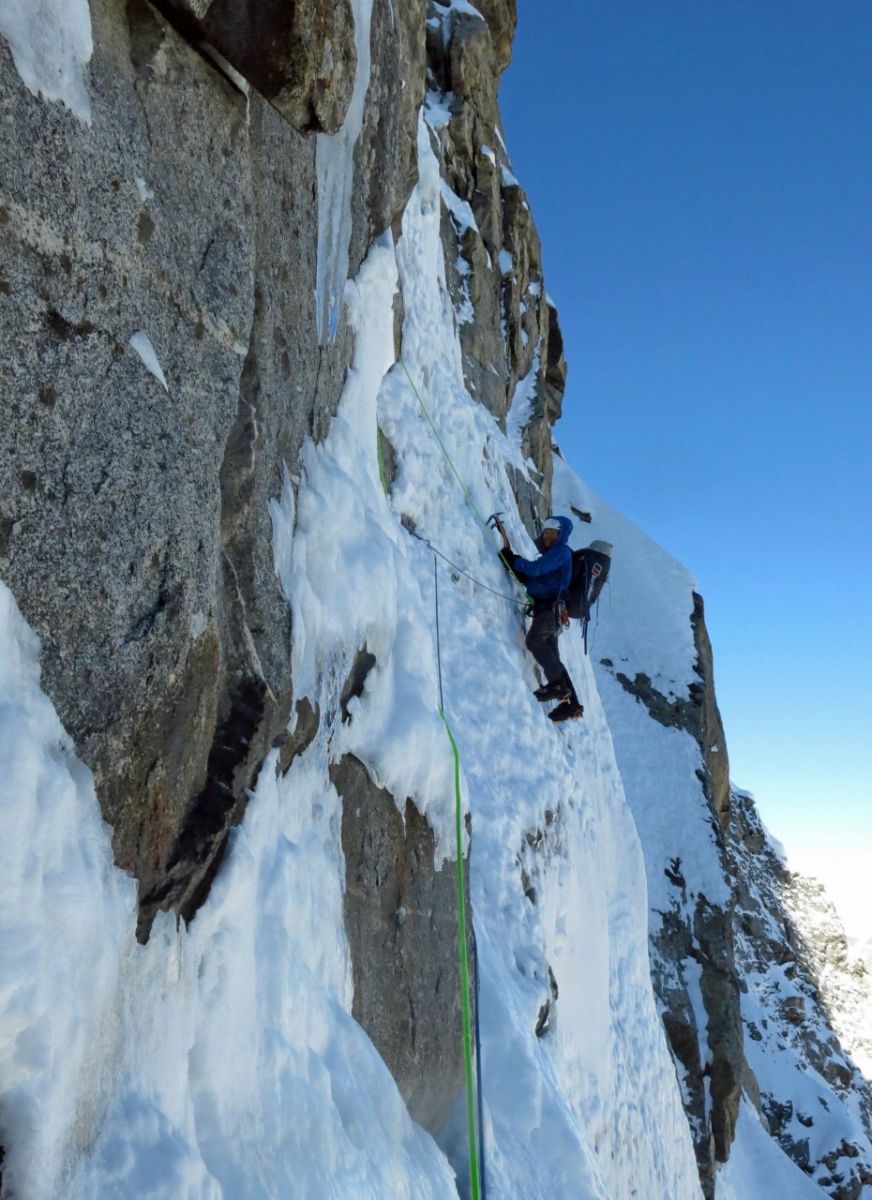 Mick Fowler leading one of the technical ice pitches

“Day four was the crux day - fantastic white ice climbing with several pitches just within our limits.  Even with numerous unplanned halts, superlatives abounded as we ended the day lying on separate small ledges cut in the ice.  Actually, Victor appeared to be more suspended in a web of rope than supported by a ledge, but such inconveniences are minor in the grand scheme of a Himalayan experience.

“At 6.30pm on our fifth day on the face it fell to me to aid and cut through the cornice to emerge onto the south side.  After another cold bivouac on narrow ice ledges, the previously unclimbed 150m summit block was dispatched and it was time to head down the complex glacier systems of the south and west face.  Two days later we had abseiled through a never-ending icefall, stumbled down disturbingly steep loose rock and met with our cook and liaison officer, who brought us tea and biscuits.”

Until this expedition, the highest point climbed on Sersank was by a Japanese team with fixed ropes and high altitude porters in 2008, who reached the base of the summit buttress from the west side.

“The climb ticked just about all of the boxes for us - interesting area, great company, unclimbed face, unclimbed summit, a striking line that was visible from afar and led straight to the summit, a challenging climb, and one with an aesthetically pleasing and different descent route.  And it all gave us old men so much pleasure that we are already thinking about plans for next year.”

Fowler and Saunders were supported by Berghaus on this expedition. A full account of the trip, along with photos, will be posted on www.berghaus.com in the near future.