News is emerging that James ‘Caff’ McHaffie and Ryan Pasquill have both repeated Divided Years (E8/9) in the Mourne Mountains, Northern Ireland ground-up. 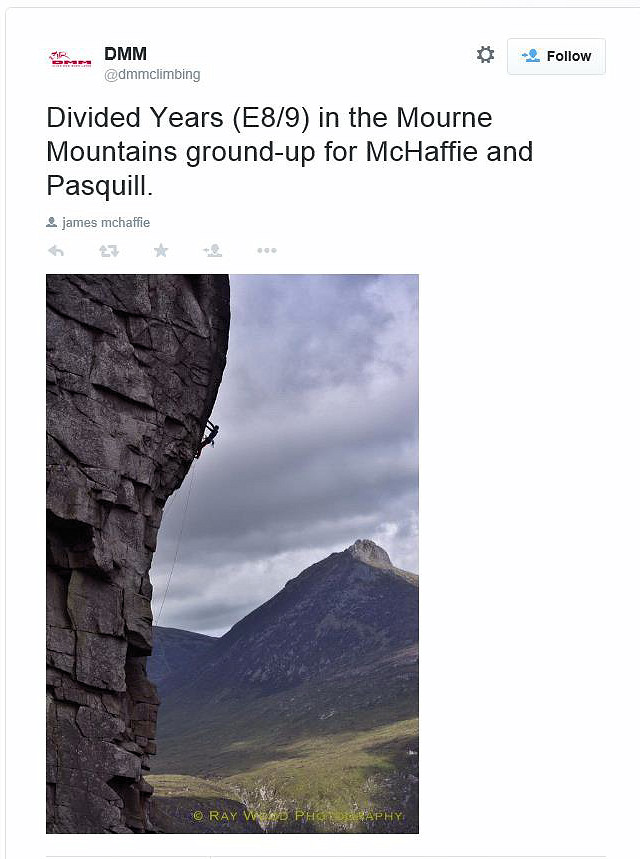 Divided Years, on Buzzard's Roost, was first put-up by John Dunne, the somewhat enigmatic figure that touched hard climbing across the UK back in the 80s and 90s. Originally graded at E10 7a by Dunne, he added that it would be F8b+/8c on a top rope with the possibility of a 'potentially fatal' fall off the top arête which has an absence of gear.  Dunne argued that the difficulty of the route combined with the seriousness justified the E10 grade.

Divided Years stood ignored for a decade until David Birkett did the second ascent in August 2005. Birkett believed that DY was more like E9 and “hard 8b on slopey holds and on very steep terrain” with, as he put it, “protection literally all over it”. The third ascent went, in a three day effort, to Dave MacLeod a year later in July 2006 albeit MacLeod suggested a further down-grade to E8 and F8a! MacLeod was the first to place all his gear on lead thus eliminating the in-situ gear used by both Dunne and Birkett.

The fourth and fifth ascents were done in June 2008 and June 2009 by Rickie Bell and Eddie Barbour respectively. Their assessment of the grade was E8/9 6c and “more F8b than F8a+”. Both Bell and Barbour placed gear on the lead utilising a Pecker Hook on a crucial placement for speed.

Also at Buzzard's Roost, Ricky Bell is also trying a new line to the left of Divided Years but no details yet and we wish Ricky luck with his new project.